City leaders seek to allay fears of coronavirus in Chinatown 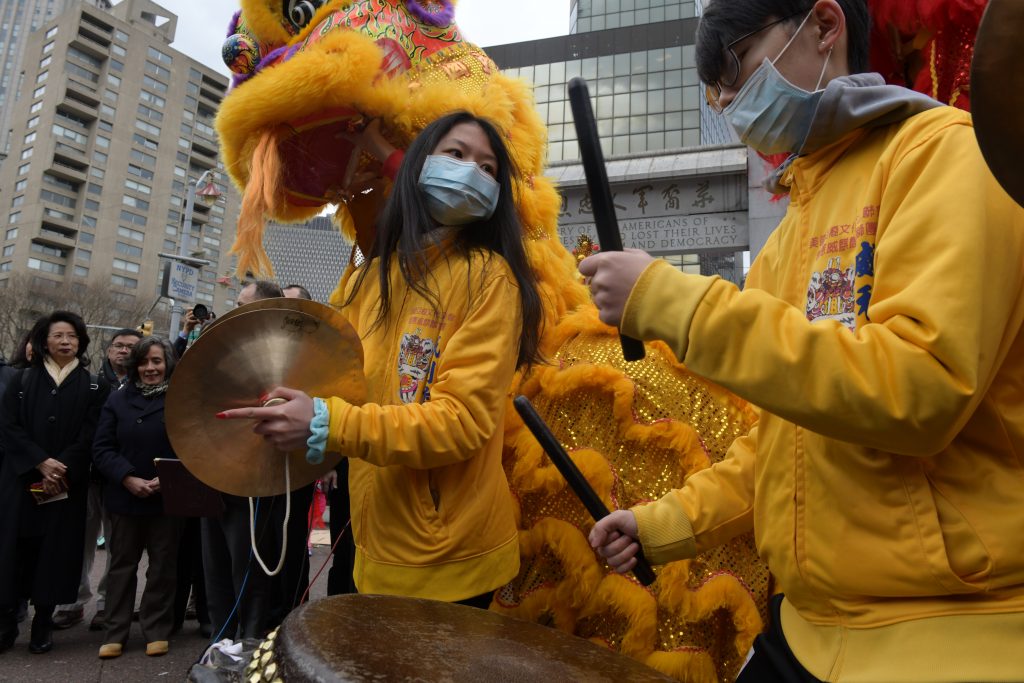 Elected officials and Chinatown community leaders invited the public to Feb. 9, 2020 Chinatown New Year’s celebration, and tried to ally fears about the coronavirus that has ravaged China and scared people around the world. Two entertainers wore masks as a personal precaution, but most people at the gathering were mask free as were most visitors in Chinatown. (Photo by Todd Maisel)

For Chinatown, the arrival of the Chinese new year is important not just on a personal level, but also an economic one. But false rumors about the coronavirus outbreak in China have stirred “unreasonable” public fears.

Next week, Feb. 9, Chinatown will host its annual Lunar New Year parade, which always attracts a massive crowd and serves as a vital economic boost for the neighborhood and its business community. On Sunday, community leaders urged the public not to listen to the rumors, but to come to Chinatown and enjoy the yearly celebration and its pageantry.

Officials at a Feb. 2 press conference in Chinatown acknowledged that business in Chinatown, Flushing, Queens and Sunset Park Chinese communities has dropped as a result of the coronavirus, which originated in China. More than 300 people have died there from the virus and even here, some people are wearing masks to protect themselves – including several teenagers who were present for the dragon dance entertainment.

The city is investigating its first suspected coronavirus case out of Bellevue Hospital. Doctors are awaiting the results of tests to determine whether the patient did contract the illness.

Queens state Senator John Liu said the virus has not only caused “unreasonable fears,” but he said, “I’ve been somewhat disturbed if not outright appalled at some of the comments and gestures that I’ve seen and my constituents have seen against the Asian community.”

“There is no need to cast aspersions on an entire community because this is happening,” Liu charged. “Diseases originate in particular places in the world and this came from an area of China which is a very large country. The comments being made by some people are unreasonable, if not downright offensive.”

He assured the crowd that “every precaution” was being taken – just like every flu season, and asserted that there is no reason to anyone to panic or avoid the activities in Chinatown or anywhere else.

New York City Health Commissioner Dr. Oxiris Barbot, fresh off her press conference from the night before at Bellevue with the mayor, assured the public that they were taking every step to insure the safety of the public. At this time, she said the 40-year-old woman being held in isolation at Bellevue Hospital since Friday was in “stable condition” and doing well, but test results have not come back from the Center for Disease Control in Atlanta. The woman had been in China days before and took the precaution of going to the hospital when she felt ill.

Dr. Barbot said it was “understandable that people were anxious when there is something new or something they don’t understand and something that may change on our daily basis.”

“The importance of events like this is to share with New Yorkers the reality that there is some things that we know, some things we don’t know and we are still learning,” Dr. Barbot said. “The risk for New Yorkers of the coronavirus is low, and our preparedness as a city is very high. While it is understandable that people feel anxious, that is no way shape or form an excuse for them to use that as an opportunity to spread misinformation, to spread racist ideas because that is currently the greatest risk to New Yorker’s.”

Dr. Barbot said residents should instead, “come together, know the information and share that information.” But she warned, “rumors can be as dangerous as any virus.”

She repeated her instructions to the public to wash hands often, cover one’s mouth and nose while sneezing and coughing.” She added, “Most importantly, if you are feeling sick, don’t go to work or school, call your doctor and get yourself checked out – these are every day measure that we take every year during flu season and the every day measure that will keep New Yorkers safe.”

Council Speaker Corey Johnson called for public calm and said information on the virus needs to be “factual and scientific.”

“We need to be calm about how we communicate with the public so I and other elected officials are here to show support for Chinatown and the Chinese community across New York. We’ve heard many business in Chinatown and Sunset Park to name a few have seen downturns in business This is a really important time of the year when these businesses count on an increase so we want to assure the public that we have the greatest Health Department in the world – we want people to go out and shop.”