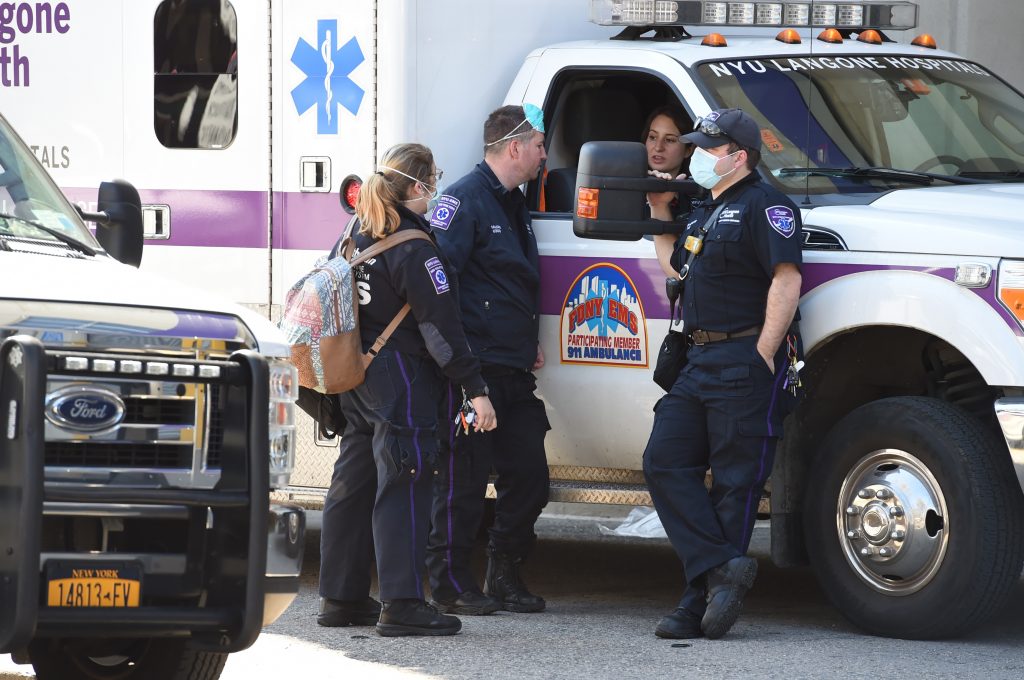 Private ambulance crews can collect Workers Compensation if they contract Covid-19 on the job, and they don’t have positively prove they caught it on the job. (Photo by Todd Maisel)

Like her late colleague, paramedic Paul Cary, Julie has transported numerous coronavirus patients for the private Ambulanz company to Jamaica Hospital throughout the pandemic.

Cary died of the illness, and Julie wound up contracting COVID-19 as well; fortunately, she survived a two-week ordeal. But her employer said that she didn’t qualify for workers compensation, even though she was repeatedly exposed to very ill COVID-19 patients.

Workers on the front-lines of COVID-19 have been getting sick from those in their care — and some employers are discouraging them from seeking workers comp benefits that would come from insurance companies. Many of these insurers have stashed billions in profits from the private workers comp system over the years.

Attorneys representing these essential workers on the front lines of the COVID-19 crisis say a strong case can be made for workers who contract the contagion on while doing their jobs.

William Crossett, a Syracuse-based attorney and co-chair of the New York Workers Comp Alliance, told amNewYork Metro there is a “great deal of law showing that workers can make a workers comp claim if they get sick while working.”

“This is long established case law,” Crossett said of workers getting sick on jobs. “The workers comp law is unique in a couple ways set up for workers to get benefits — typically it’s a traumatic event or accident case, but then there is bakers asthma, occupation diseases like asbestosis (an related to long-term exposure to asbestos) — these are set up as accidents.”

Workers Compensation allows an employee to recover lost wages and get full payment of medical claims, unlike going to insurance that costs an injured worker costly co-pays that they can ill afford, especially if the injury cause a disability.

Disability payments, on the other hand, can take a year or more to receive that “employees can ill afford to wait that long,” Crossett said.

After an illness or injury, the injured worker needs to see a doctor, even using telemedicine and describe details to the doctor. The worker then tells the doctor the relationship between his work and how he may have contracted the virus. The doctor would advise that person to quarantine or not work.

Many people don’t know they qualify for workers comp.

Julie was told by her employer to use her sick time and apply for disability for the remainder of her time off. Crossett says that while employers are not responsible for the payments to Julie under workers comp, insurance companies will often raise insurance rates based on the number of employees making claims, so employers sometimes put up “barriers” to filing or are discouraged from providing comp information.

However, employees do not have to file with their employer. They are required under the law to file notice with their place of business within 30 days of the injury or work related illness – a written notice or an email should suffice, attorneys say.

If the employer refuses to provide comp information, the worker can file a workers comp claim online with the Workers Compensation Board within two years of an on-the-job injury.

Only a few employers have taken punitive actions against workers filing claims, and Crossett stated that could open that employer to  a separate “Section 120” discrimination claim.

“It discriminates against an employee for filing a workers comp claim, then it becomes to claims – one for lost wages and benefits and a claim against the employer because either they were fired, demoted or other actions were taken against them,” Crossett noted. “This protects the worker and employer can be liable for damages.”

Many people don’t know that “gig workers” may qualify for workers comp. However, legal experts noted, some employers will discourage any worker from filing for workers comp, and instead will direct them to seek “disability,” which doesn’t account for lost wages and doesn’t meet the total losses due to the on-the-job injury.

Some gig workers may include construction workers and even journalists working freelance under the daily direction of a company. Some of those claims have been successful, Crossett said, many resulting in success in collecting Workers Comp benefits after an injury.

“I hear it all the time – I don’t want to take the claim – how can you prove you got it at work,” Crossett said. “If you are delivering meals on wheels to the elderly in apartment buildings, a lot elderly are afraid to go out – there is a lot of chances to get Covid-19 when making delivery – where else would that person have caught it but for work if they are working 12 hour days. Just because there is spread through the community you don’t have to prove absolutely – the presumptions are in law favor injured workers.”

Crossett said there are proposed laws to get benefits under workers comp, including the proposed “Heroes fund.”

“We want people to be clear, these Federal programs don’t yet exist and I don’t know if will come to fruition – look how long it took to get the 9-/11 (Zadroga Act) to be passed,” Crossett said. “The Workers Comp law was set up and conceived with the idea that insurance companies take premiums and pay out benefits over different time periods, but over the last few years, they’ve made extremely high profits – billions of dollars so they are well positioned to absorb COVID-19.”