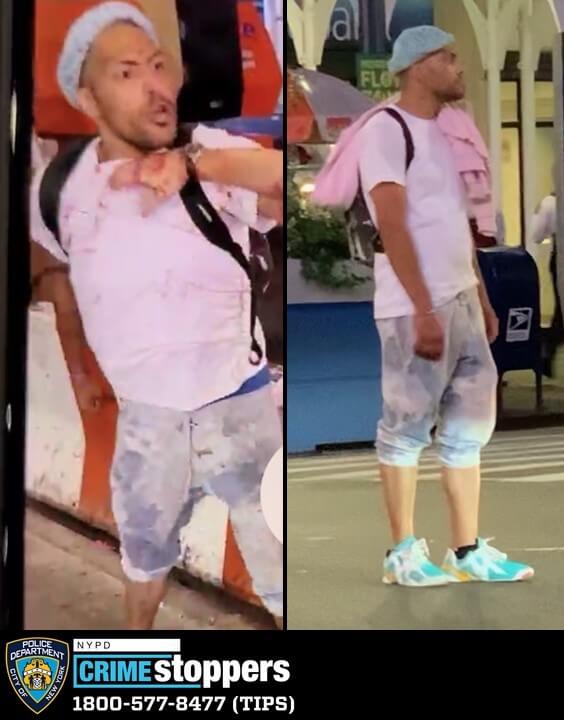 The Midtown brute whom, police said, violently beat up two men in 15 minutes on Sept. 8, 2022.
Photo courtesy of NYPD

Cops are looking for the Midtown brute who violently and randomly attacked two men within about 15 minutes’ time earlier this week.

The NYPD released video images of the perpetrator responsible for the assaults that occurred on Sept. 8, beginning with an attack near the corner of 7th Avenue and West 35th Street at 8:40 p.m.

According to law enforcement sources, the assailant approached a 38-year-old man and punched him multiple times in the head, causing the victim to lose consciousness.

Police said the attack was completely unprovoked, as no words were exchanged between the victim and suspect before it occurred.

The victim regained consciousness to discover that the attack left him with facial lacerations, a fractured jaw and a chipped tooth. EMS rushed him to Bellevue Hospital for treatment.

Fifteen minutes later, police reported, the brute similarly attacked a 44-year-old man at the corner of 7th Avenue and West 31st Street at about 8:55 p.m.

Again without any provocation, law enforcement sources said, the suspect punched the victim repeatedly about the face, then fled on foot in an unknown direction.

The victim suffered a nose bleed, but refused medical attention at the scene, authorities said.

As shown in the footage, the suspect wore a gray cap, a white t-shirt, acid-washed jean shorts and multi-colored sneakers while carrying a black backpack and a pink sweatshirt.

Anyone with information regarding the random attacker’s whereabouts can call Crime Stoppers at 800-577-TIPS (for Spanish, dial 888-57-PISTA). You can also submit tips online at crimestoppers.nypdonline.org, or on Twitter @NYPDTips. All calls and messages are kept confidential.