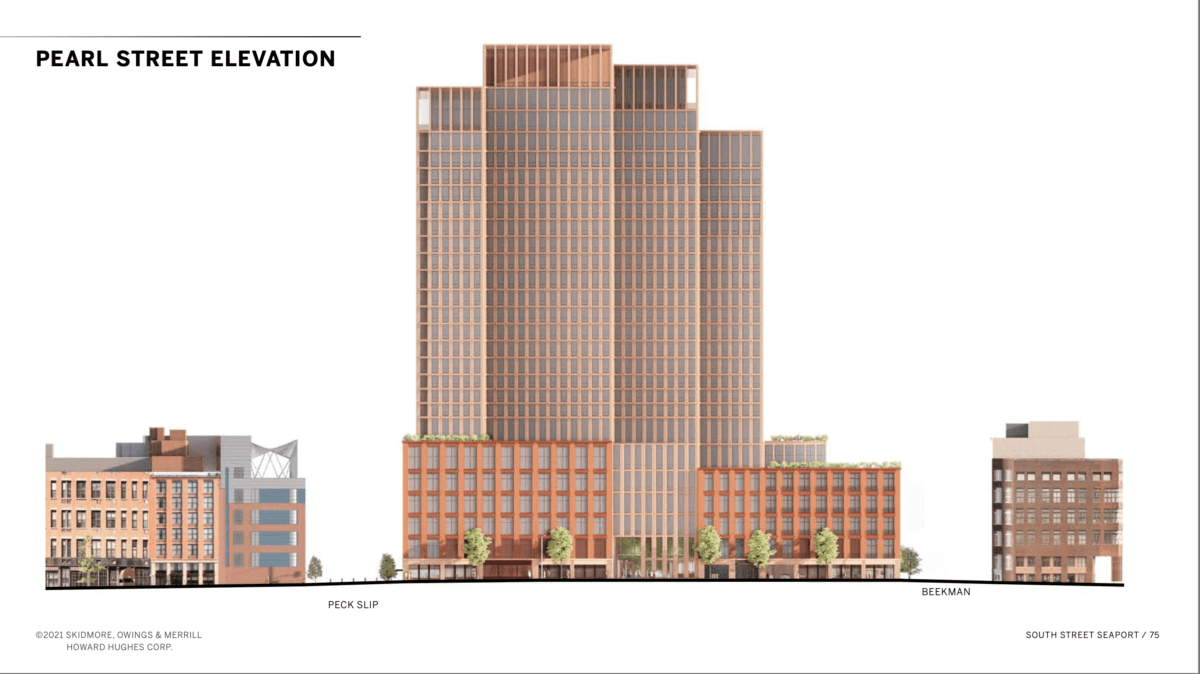 Parking lots can live many lives. But deciding what kind of life exactly can lead to major gridlock. At least this is the case for one former parking lot in the South Seaport Historic District in lower Manhattan.

Plans to build an $850 million, 26-story tower at 250 Water St. came to a screeching halt when the state Supreme Court blocked further construction on the site late last week.

In his decision, Judge Arthur Engoron stated the city’s Landmarks Preservation Commission (LPC) regularly met with developer Howard Hughes Corporation to discuss how to provide “political cover” for the proposed building by linking its development with the survival of the South Street Seaport Museum. The court stated the public deserved better than this “quid pro quo.”

“LPC is tasked with a particular mission, to wit, to preserve the historical character of designated areas and buildings, and here, it abused that discretion by diverging from a prior practice without explaining why,” Engoron stated in the decision.

The Landmarks Preservation Commission rejected proposals to develop a high-rise building at 250 Water St. at least four times in the past, according to court documents.

The proposal would “cause an abrupt change in scale within the district which would be disruptive of the district’s homogenous quality,” the LPC had previously stated.

Preservationists with the Seaport Coalition, Save Our Seaport and Children First NYC are celebrating the win and pushing their own plans for the future of the historic district, which is currently populated by early 19th-century buildings and cobblestone streets.

“We are thrilled,” said Joanne Gorman, a Seaport Coalition member. “It’s a positive and gratifying win.”

The coalition long fought against the proposal, brought by site owner Howard Hughes Corporation and subsidiary 250 Seaport District, stating the corporation improperly moved development rights from Pier 17 to the site “exactly like knights on a chess board: two squares up Fulton Street and one square over Water Street, and never mind what lies in between,” per court documents.

Children First NYC is vehemently opposed to developing the site, which is located across the street from P.S. 343 The Peck Slip School and Blue School.

“It really would have a massive impact on children,” said Megan Malvern with Children First NYC. “Their entire elementary school career could be next to a construction site.”

The city’s Planning Commission and City Council had previously approved the proposal in December 2021. The corporation began remediation to evaluate the air quality and collect soil and groundwater samples at 250 Water St. in 2022. The Howard Hughes Corporation purchased the site in June 2018 and announced the project in 2020, describing it as a “visionary project” that would “propel the city’s economic recovery.”

The development builds 200 market-rate and 70 affordable — earning an average of 40% of the area median income, or roughly $45,000 for a family of four — apartments for rent, as well as office, retail, and community space. The corporation stressed the project would bring much-needed revenue to the Seaport Museum, which it said was “under the threat of permanent closure.”

“We worked hard to produce a design that is responsive to the Commission’s comments and preserves the project’s crucial benefits: deeply affordable housing in one of the city’s wealthiest neighborhoods and meaningful funding for the South Street Seaport Museum, the heart of the Historic District,” Howard Hughes, President of the Howard Hughes Corporation New York Tri-State Region, told amNewYork Metro.

But other areas in the neighborhood should be prioritized for housing development, said Malvern of Children First NYC.

The Howard Hughes Corporation still lists 250 Water Street as a coming-soon project on its website, advertising “27 Floors of Residential, Office, Retail and Community Space in the Seaport along the East River in Lower Manhattan.”