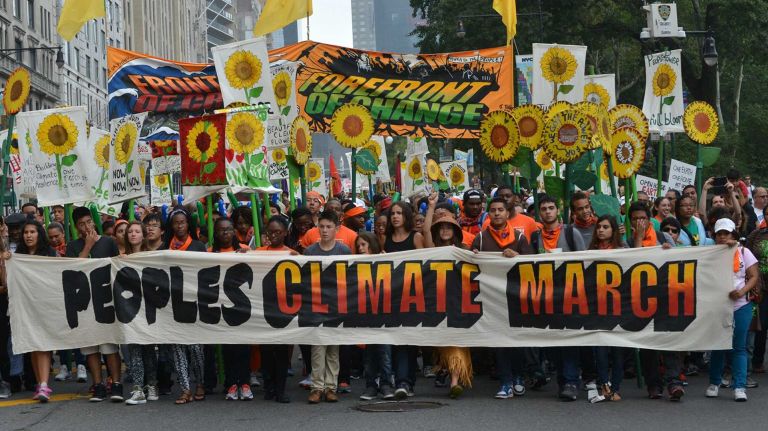 Manhattan streets were filled Sunday with thousands of environmentally-conscious activists from around the world who banded together to share a big message: Go green before it’s too late.

Supporters of the People’s Climate March said the huge turnout would be instrumental in getting UN dignitaries to meaningfully work on saving the environment during their climate summit Tuesday by agressively pursuing actions that reduce greenhouse gases around the world, ban hydrofracking and increase investment in green energy.

The march’s organizers said New York has led the way with many green initiatives, including the mayor’s pledge to reduce greenhouse gas emissions 80% by 2050.

Marchers, however, felt more could be done.

“People care passionately about this issue,” said Dominique Browning, 58, of the Upper West Side, who was one of the tens of thousands who participated in the event. “We need our leaders to do something.”

The rally began on the Upper West Side and marched down to 42nd Street before heading west to 11th Avenue and then turning south for the culmination at 34th Street.

Participants, many of whom brought homemade signs, floats, costumes and other paraphernalia, marched peacefully through the city accompanied by the cheers of thousands of onlookers on the streets and inside buildings.

Unions such as 1199 SEIU and 32BJ joined environmental groups from around the country at the rally. Big name celebrities including Joseph Gordon-Levitt, Leonardo DiCaprio, Edward Norton and Mark Ruffalo also took part.

“We are here to say there are other ways to move forward without burning fossil fuels,” Ruffalo said. “When [elected officials] don’t answer this will of the people, we will remove them or go around them. That is the message today.”

President Barack Obama will join leaders from 125 other nations at the summit to pursue solutions to the world’s climate issues. Leaders from the finance, science and public sectors will also participate tomorrow.

Mayor Bill de Blasio, who also took part in the march, along with other elected officials like Council Speaker Melissa Mark-Viverito, former Vice President Al Gore and U.N. Secretary General Ban Ki-moon, announced a new green policy: Every city-owned building, including schools and public housing projects, will be retrofitted to reduce a total 3.4 million metric tons of greenhouse gases by 2025.

The plan, which will involve 3,000 buildings, is part of the city’s overall goal to cut greenhouse gases over the next 36 years.

“My hope is that New York City’s example will resonate and build real momentum,” the mayor told reporters.

Gov. Andrew Cuomo also announced the creation of Climate Week, starting Monday, which highlights the progress New York has made in promoting such green plans as BuildSmart NY, which reduced energy consumption in state buildings by 5%.

Many marchers and leaders yesterday said they are confident that the rally will make a major difference.

“It’s always important when people get together and express something that they care about that can change the world,” said Teresa Catanas, 35, of Murray Hill, who volunteers with the West Harlem nonprofit Sanitation Coalition.