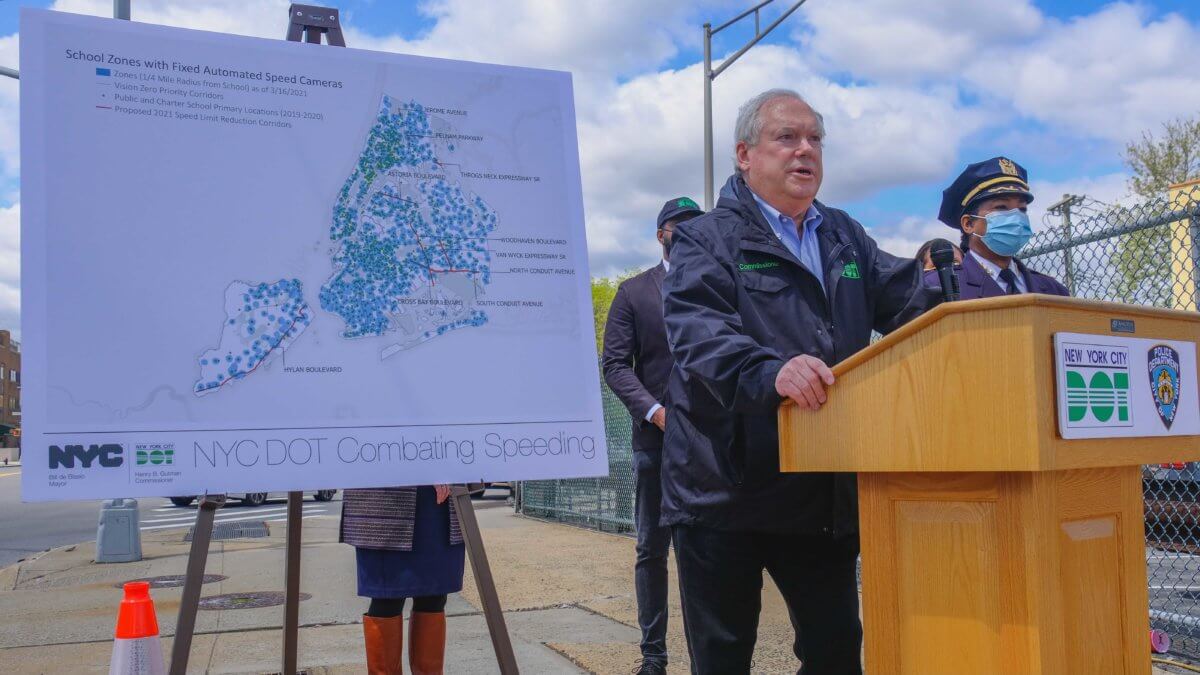 Mayor Bill de Blasio announced Monday a blitz of summonses against motorists as part of his annual Streets Week!

Meanwhile, city Department of Transportation Commissioner Hank Gutman was on the fringes of Brooklyn on May 10 unveiling a plan to reduce speed limits by five miles per hour in order to drive down the number of incidents between cars, cyclists and pedestrians.

Up to 45 of New York City’s more than 6,000 miles of roadway will see the decrease in the speed limit — something Gutman believes will save lives as the difference between 25 and 30 miles per hour can mean life or death for someone getting hit by a car.

“April has been incredibly hard for the people of the city of New York, we’ve had more than 25 fatalities, more than almost any other month since we embarked on this,” Gutman said. “Why is that, why despite all the efforts, are we still facing these challenges? The leading cause is reckless driving, and speeding. This is behavior that we saw pick up during the pandemic, not just in New York but around the country.”

Most of the corridors under the plan, including Conduit Avenue in East New York where Gutman announced the change, take the limit down to 30. Out of 11 corridors to see reductions in the plan, only Astoria Boulevard from 111th Street to 8th Street, Pelham Parkway from White Plains Road to Stillwell Avenue, Throggs Neck Expressway Service Road from Longstreet Avenue to Sampson Avenue and Jerome Avenue from Bainbridge Avenue to East 233rd Street will go to 25 mph.

Gutman said the city may have the legal right to shave a few extra miles of the speed limit, but the city is sticking to smaller increments this year.

While the so-called blitz will focus on speeding and driver who fail to yield, all 77 patrol precincts will be issuing more summonses to motorists for speeding and failing to yield in particular, according to the mayor’s office.

Part of the blitz will come in the form of speed camera enforcement, which issues tickets to drivers hauling 11 miles an hour above the speed limit, though most of the city’s 1,400 speed cameras are concentrated around 750 schools zones that do not operate at all hours.

De Blasio said more announcements regarding transportation, traffic safety, and open streets are in the pipeline for this week.

“[NYPD will] be targeting drivers who speed and who failed to yield to pedestrians and cyclists. And the message will be clear, dangerous driving has no place in New York City. So, you will see a strong NYPD presence this week as an example of what we’ll be doing in the weeks and months ahead to protect New Yorkers,” de Blasio said. “

A full list of corridors where speed limits will be reduced are as follows:

Advocates at Transportation Alternatives have issued a dark warning for 2021 in that it is on track to be the worst year in terms of traffic deaths since the mayor launched the program in the first year of his administration in 2014.