Note: if you purchase something through one of our affiliate links, Schneps Media may earn a commission.
Wade Bowman
comments
Posted on September 8, 2022 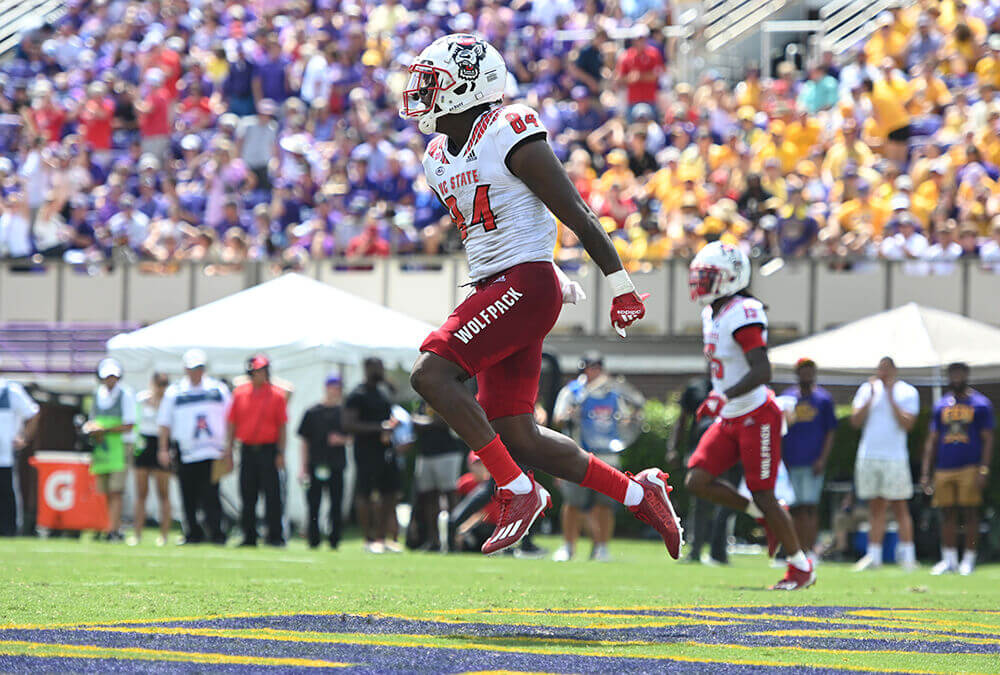 Despite being able to eke out East Carolina in week one, N.C. State raised a lot of questions about its legitimacy as a top-15 team in the nation. Those questions proved too valid for the Pack to keep its ranking heading into the current week, dropping five spots in the AP Poll ahead of the team’s home opener against Charleston Southern on Saturday, Sept. 10.

The 21-20 victory over the Pirates was headlined by offensive incapability, outstanding special teams play, and sustained excellence on defense. As preparations are underway to take on an FCS opponent in Carter-Finley Stadium, all focus has shifted to whether N.C. State quarterback Devin Leary can repeat the success he saw a year ago.

As was the case last season, the Wolfpack struggled greatly in a true road environment. Leary was no exception, looking less than stellar while tossing for 211 yards on a 52% completion rate with a touchdown and an interception. Luckily, N.C. State gets to take its home field for the first time in 2022, grass it remained perfect on throughout the 2021 season.

The Buccaneers walk into hostile grounds coming off a 52-38 loss to Western Carolina. Although the final result wasn’t what Charleston Southern was looking for to begin the year, a plethora of playmakers showed what they’re capable of.

Buccaneer’s quarterback Ross Malmgren has earned a firm grasp on the starting job in his redshirt sophomore season, putting up numbers against the Catamounts that justify his continued presence under center. Throwing for 392 yards, five touchdowns, and an interception on a 66.7% completion rate in week one, Malmgren embraced a gunslinger mentality that could easily catch N.C. State’s defense by surprise.

Pairing that willingness to take risks downfield with targets like running back TJ Ruff and wideout Seth Anderson, Malmgren has the means to make a splash in Raleigh that many won’t be expecting. Ruff dominated as both a rusher and receiver in week one against Western Carolina, totaling nearly 160 yards from scrimmage with a touchdown, while Anderson held claim as Charleston Southern’s best pass catcher on the day with eight receptions for 131 yards and two trips to the endzone.

Defensively, Buccaneers safety Hombre Kennedy and linebacker Garret Sayegh lead the way for Charleston Southern. The two paced the team in week one, totaling seven tackles each, with Sayegh recording a tackle for loss and Kennedy forcing a fumble that Sayegh would go on to recover. Defensive back Geordan Livingston also poses a threat as a ball-hawking corner that’ll constantly be looking to make Leary pay for miscues out of the pocket.

While Charleston Southern comes into this game 0-23 against FBS opponents all time, each season is a new opportunity to change the course of history. To make a dent in that all-time record, a much different Wolfpack team would have to take its home field than the one that was unbeatable in Carter-Finley Stadium in 2021.

The home opener is shaping up to be the warm-up that N.C. State wasn’t afforded in week one like many other power-five schools across college football. That being said, crazier misfortunes have struck Wolfpack athletics in the past and the Buccaneers have the tools available to eradicate the luck that brought N.C. State to its current 1-0 standing.

With his breakout performance serving as one of the few positives for the Pack in a near-disastrous week one road win, Sumo-Karngbaye earned his reps in the backfield alongside Jordan Houston. Filling the bruiser role to compliment Houston’s shifty play style, Sumo-Karngbaye was bouncing off tacklers left and right against East Carolina and will look to do much of the same against the Buccaneers.

2022 stats: Five total tackles, one tackle for loss, one pass breakup, one interception

N.C. State’s defense picked up the slack left behind by its failing offense in week one, largely thanks to Battle’s continued improvement at defensive back. Proving to be a thorn in ECU quarterback Holsten Ahler’s side all afternoon, Battle is a true ball hawk in coverage who’s consistently looking to make game-changing plays.

In his third year with the program, Malmgren is coming into his own as the starting quarterback for the Buccaneers. Week one’s contest against Western Carolina saw him light up the box score, throwing for nearly 400 yards with five touchdowns on an efficient 66.7% clip. While N.C. State’s defense presents a more difficult challenge for Malmgren to overcome, his tangibles and experience have prepared him for the bright lights.

Splitting looks out of the backfield with JD Moore, Ruff looked like the Buccaneers’ premier target in week one. Proving even more deadly in the passing game than the run game, the second-year back is a true dual threat that has to be accounted for at all times. The Wolfpack handled the run well against a pair of talented rushers in Greenville, North Carolina, but Ruff’s versatility provides a new obstacle to gameplan against.