‘It’s been such a mental grind’: Islanders trying to balance rest with tuning up ahead of playoffs 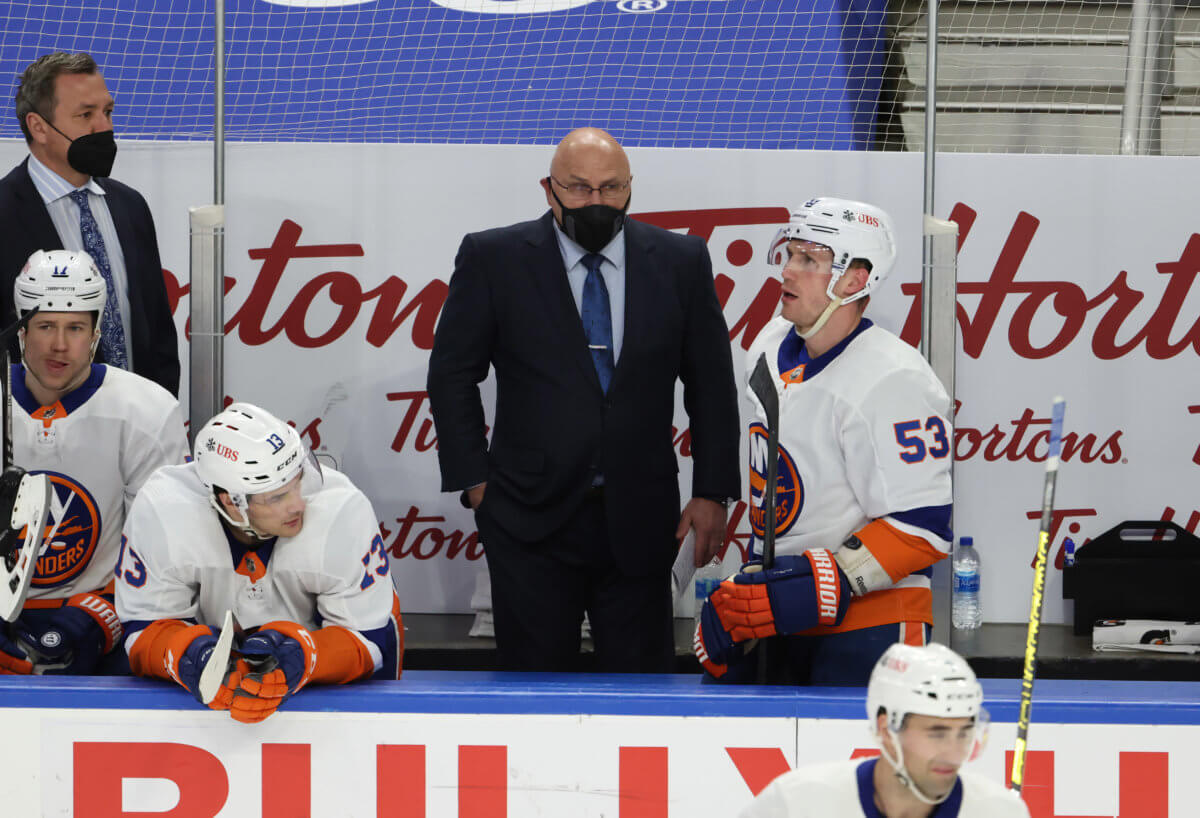 After clinching their third-straight playoff berth, the Islanders looked as though they took their proverbial foot off the gas pedal in a two-game series up in Buffalo against the worst team in the league; featuring blown third-period leads, loose defensive play, and underwhelming offensive outputs against Michael Houser, an ECHL goalie making his NHL debut at the age of 28.

On the surface, such losses provide a reason for worry. After all, the Islanders missed out on a golden opportunity to move up in the Eastern Division standings from their current fourth-place spot, thus further slimming the chances of the team getting home-ice advantage in the first round.

That doesn’t seem to be the primary concern of Islanders head coach Barry Trotz, however, as the name of the game for the final three games of the regular season is getting his group right between the ears after a hectic 56-game sprint. He previewed such tactics on Tuesday night when he rested Mathew Barzal, Matt Martin, and Leo Komarov.

“I think the biggest thing for us, it’s been such a mental grind,” Trotz said. “Some of the guys are looking for a little breather. That’s why I want to get some guys rested, to give them a breather because once the playoffs start, it’s going to be another mental grind. You can’t take a shift off.”

He also admitted that there will be some other notable players getting rest beginning Thursday night in their first of two games against the New Jersey Devils, though he wouldn’t give exact specifics.

The question naturally arises if he will give some of his blue-liners a night off. The Islanders’ structured, defensive style of play needs such meticulous attention to detail to truly work, it’s easy to see when mental fatigue is making an impact, as seen in recent weeks — especially in Buffalo.

“I think right now, we’re not as mentally sharp because we’ve done a lot of grinding and it’s a bit of a natural rollback of ‘hey, we got in [the playoffs], now we can breathe a little bit.'” Trotz admitted. “While we’re breathing, we’re just not as sharp as we should be. It’s an opportunity right now to get some rest as best we can but keep all the pieces in order so we can still play the game and be fairly sharp for when the live bullets come in another week to 10 days, whenever they want to start.”

To suggest that Trotz’s men are invested in the Islanders’ effort, though, is something that crosses the line for the head coach.

“This group has given a lot,” Trotz said. “They’ve played 31 or 32 playoff games [over the last two years] and this year has been like 50-something playoff games. This group has invested a lot. For anyone to question their ability to give is hurtful to them because this group hurts a lot.

“This group I have a lot of trust in. They battle hard. There shouldn’t be any apology. They’ll be ready, they’re a good group.”

Just three more games remain to sort it all out.