If Kenny Golladay is frustrated with Giants, the $21 million wideout will have to earn his reps 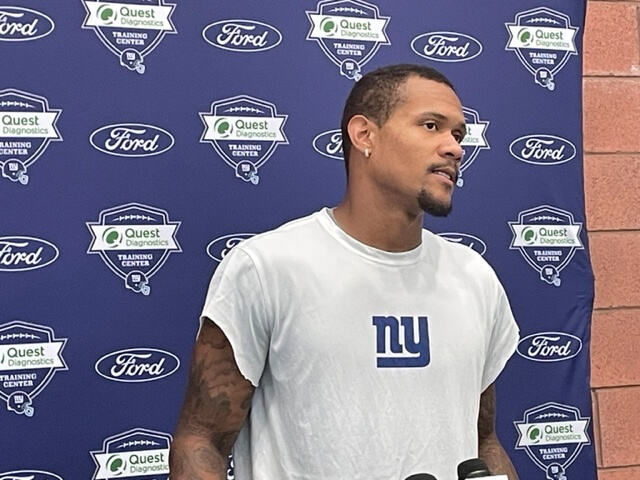 The New York Giants have surprised the football world with an impressive 2-0 start. With a new coaching staff and front office mindset, the Giants are looking to turn the page from many years of futility.

Part of that futility has been giving large contracts to players that weren’t producing up to that level.

When Kenny Golladay signed his four-year, $72 million contract back in 2021, the belief was that he could help New York stabilize a passing attack that had been one of the worst in team history. In two years with the team, injuries and a lack of production have pushed Golladay’s legacy in New York as another failed free agent signing.

In the Giants’ latest 19-16 win over Carolina, further controversy swelled. The former Lions receiver played just two snaps in the win and was not targeted. A not-so-different showing than the two catches he made on opening day.

The quiet start to the season is based on one thing: practice. To head coach Brian Daboll and the Giants staff, Golladay clearly hasn’t shown enough.

“Whether it’s the highest-paid player, the lowest-paid player, the highest draft pick, an undrafted free agent – we’re going to go out there and let the guys compete it out. One week doesn’t necessarily mean this is what’s going to happen the next week.” Daboll later added “I think everybody understands what we are trying to do as an organization in terms of continuing to get better, competing for spots, working as hard as you can work. David Sills has done a good job. He’s done a good job and he’s earned some of his playing time and each week is a competition.”

With the Giants looking for more results in the passing game, and the coaching staff going week-to-week with roster decisions, there’s a lot of ambiguity as to who will end up playing on Monday night against the Cowboys.

Of course, this isn’t the first time controversy surrounded Golladay this year. The 29-year-old struggled throughout training camp and couldn’t get open against the Giants’ defense in practice. While that was originally contributed to an injury the receiver suffered, practice reps are becoming more and more scrutinized by the coaching staff.

If the frustration is coming out of Golladay, it isn’t being noticed by the leaders of the clubhouse though. Speaking on Tiki and Tierney Tuesday morning, captain Julian Love spoke about the peculiar situation Golladay is in.

“He’s ready. His locker is right next to mine in the locker room. He just goes about his work, he’s in early, he’s there late just like the rest of us. We’ll see how that changes. It’s definitely a weird situation, but (Daboll) sticks to his word and he’s looking for the best matchups and best opportunities come Sunday.” Love said on Audacy’s WFAN Sports Radio (New York).

Kenny Golladay was not a Joe Schoen hire. He is another recent example of the tough cap situation the Giants are currently in thanks to poor management decisions from previous regimes.

The Giants cannot cut Golladay. They would owe him over $20 million regardless if he’s cut or not, and it would further increase the large dead cap the Giants currently hold.

If Golladay is to make the most of the situation, he’ll need to show it on the practice field. Otherwise, the Giants and their highest paid wideout will have another week of controversy to deal with.