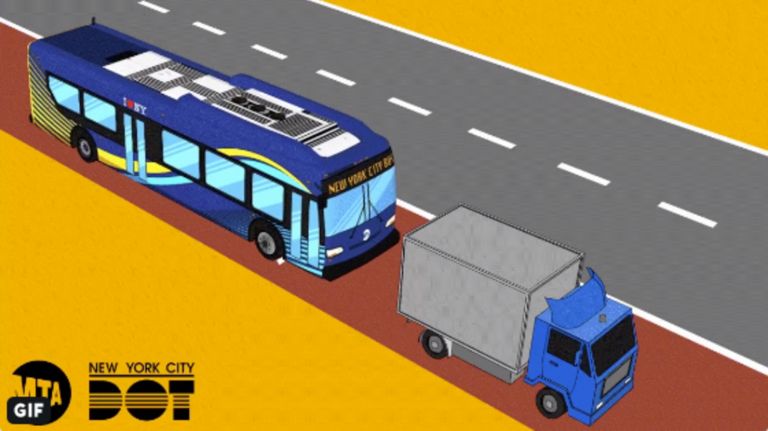 A gif informing drivers that their vehicles will be photographed if they’re blocking city bus lanes is causing laughs on social media.

The MTA and Department of Transportation announced Monday that automated camera systems on buses will begin taking real-time photos of vehicles blocking certain bus lanes on Oct. 7. Motorists will be issued a warning with a 60-day grace period, but after 60 days, if they block a lane again, they will be fined $50 for each violation, the agencies said.

But the video ad, which shows a truck disappearing after the bus camera snaps a photo, had people making comparisons to "Star Wars" and joking about lasers.

“If you park your truck on a bus only lane, it will be deleted from existence,” another joked.

A Reddit thread on Wednesday started with a user writing, “PSA: The Department of Transportation is stepping up bus lane enforcement by equipping all SBS lines with photon death rays.”

The cameras will be equipped on 51 buses on the M15 Select Bus Service route, and they’ll be added to B44 SBS and M14 SBS buses by the end of November, the MTA said.

“Automated bus lane enforcement is a critical part of our plan to increase bus speeds, because transit priority improvements do not work if motorists do not respect their purpose or abide by traffic laws,” said NYC Transit President Andy Byford. “We need to give our buses every fighting chance to get through the city’s congested streets.”

The average bus speed across the city is 8.1 miles an hour, as of August.