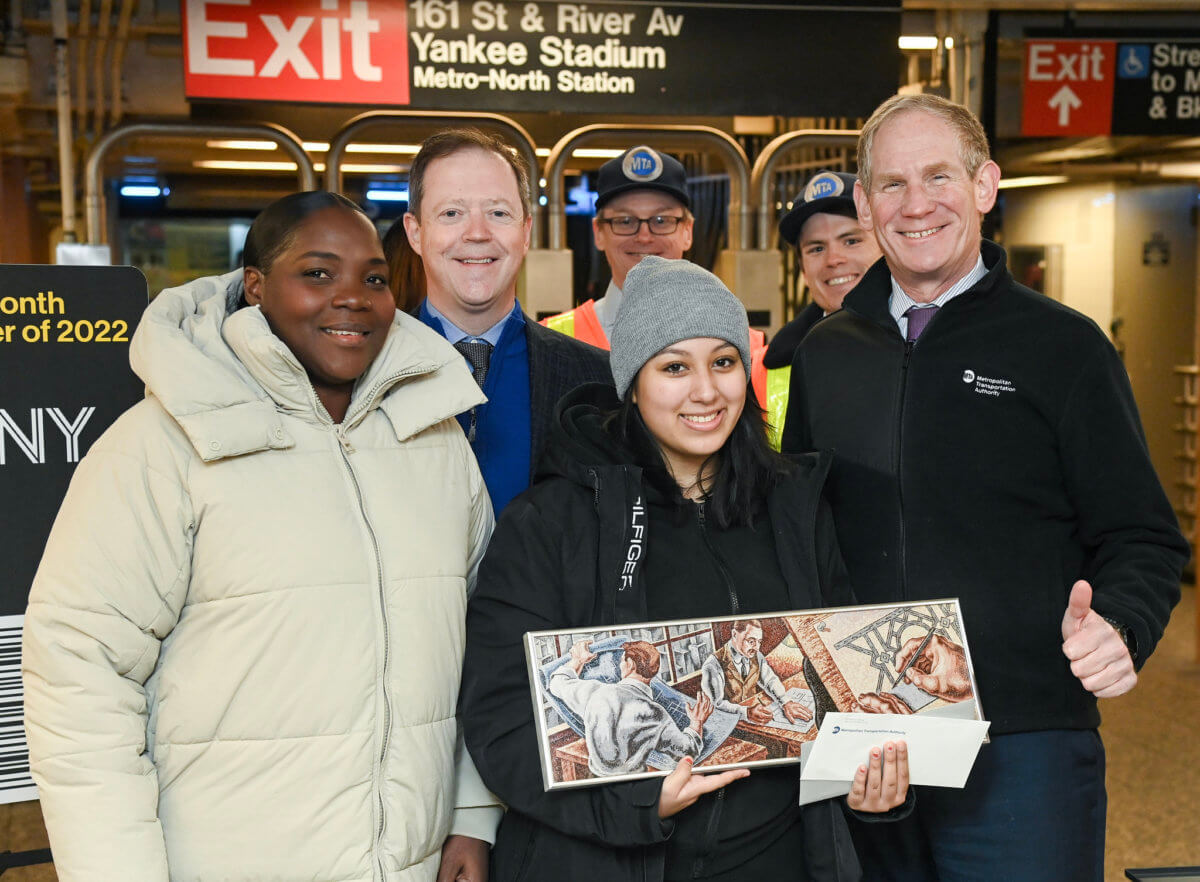 The MTA announced Tuesday that subway ridership has passed the billion mark in 2022, the first time since before the COVID-19 pandemic.

The lucky one billionth rider was 18-year-old Sasha Salazar, a Bronx resident studying nursing at Lehman College. Salazar swiped her MetroCard at the 161st Street-Yankee Stadium station Tuesday, intent on riding the 4 train into Manhattan to catch a matinee screening of Avatar: The Way of Water, but quickly learned of the significance of the morning’s turnstile crossing.

“I just thought it was gonna be a normal day in the city, and then boop. So I’m just really happy and excited,” Salazar told reporters following a press conference with MTA honchos at the station, before heading to see the James Cameron flick. “I just had my MetroCard, I swiped it, and then I saw two men…and they were, like, so happy, and I was like oh, ok. And then they were like, ‘congratulations, you’re the one billionth customer on the MTA.’ And I was like, is this real?”

In celebration of her historic swipe, following years of loyal ridership, MTA Chair Janno Lieber awarded Salazar on Tuesday as the “model MTA customer,” providing her with a new OMNY card pre-loaded with $100, a free membership to the Transit Museum, and a framed work of subway art.

Crossing the billion threshold is a major COVID-era landmark for the authority, which has struggled to return to its pre-pandemic ridership levels. Annual ridership between 2016 and 2019, the four years before the onset of COVID-19, averaged more than 1.7 billion, according to MTA statistics. But ridership plummeted to 639 million in 2020 as most New Yorkers were urged to quarantine at home, rising to just under 760 million in 2021.

Average weekday ridership stood just shy of 5.5 million in 2019, but the metric has not crossed 4 million since early March of 2020.

Although air and auto travel have essentially returned to pre-pandemic baselines, mass transit ridership has stagnated at around 60% of pre-COVID totals, a phenomenon MTA bigs have blamed on the mass advent of working from home. Transit systems across the nation have been similarly hobbled by the virus.

Facing a transit service death spiral, the MTA was the beneficiary of billions of dollars in federal operating aid, but with that money running out and fewer riders returning than anticipated, the agency has for months warned it was on the precipice of a “fiscal cliff.” This month, the authority approved an austerity budget with significant spending cuts, and approved a fare hike that could bring the cost of a subway or bus ride above $3 by 2025.

Despite that, agency honchos are optimistic for a 2023 bringing the MTA ever closer to the recovery it so desperately needs.

“Here’s to 2023, and a new ridership record that’s coming next year,” said Lieber. “Hopefully 4 million subway customers one [day], we’ve been creeping up on that for a while. And we’re gonna continue our rise past 70% of pre-COVID and on and on, because the subway is where New Yorkers are returning to normal life.”