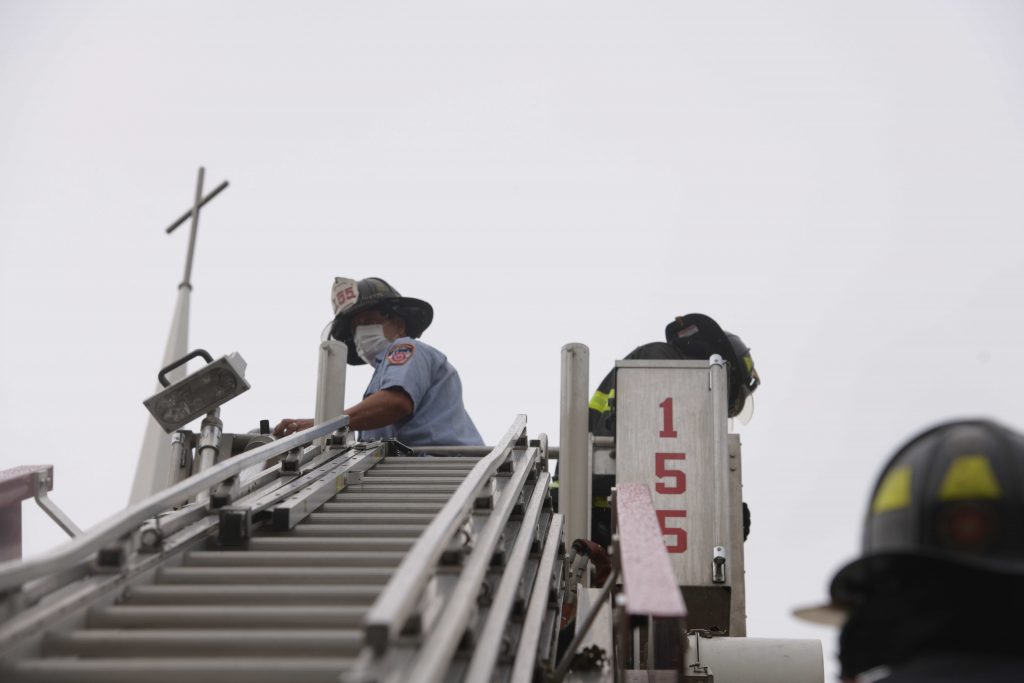 Firefighters and DOB inspector check steeple of Spirit and Truth Christian Church that suffered a fire last night after a storm swept through and struck the church with a bolt of lightening.(Photo by Todd Maisel)

First, it was COVID-19 that forced The Spirit and Truth Christian Church to close, only re-opening two weeks ago. And then on Wednesday, July 22 a massive thunderstorm rolled through the South Ozone Park neighborhood, a lightning bolt hitting the steeple and causing heavy exterior fire destruction and some interior damage to the interior sanctuary.

Parishioners were outside the church at 134-02 Sutter Avenue working with city officials to remove property from the well over 70-year-old wooden building, with some remnants sitting on the ground outside the building.

The church was hit by a lightening bolt at about 6:30 p.m. causing the steeple supports and front exterior walls to ignite. Firefighters were on the scene in minutes and saved the church from further destruction. But enough damage has been done that will force the church to close for the time being.

“I felt like crying when I saw it because we only started coming back like two weeks ago and now we’re out again,” said Sonia Mondah who came with her family to help with salvage and support for her pastor.

The building was recently renovated, a new roof installed not long ago. The fire caused heavy damage to vinyl siding that closed off a former round stained glass window that blew out some years back due to heavy winds from another storm — damage too expensive to replace for the small congregation.

Pastor Daniel Marimuthu, who has presided over the church that has hosted more than 100 people each Sunday for the past 30 years, currently has more than 200 congregants overall. He worked with Fire and Buildings officials to determine the structural damage that might undermine the 50 foot tall steeple topped with a big white cross. He then surveyed the interior with officials and an adjuster from his insurance company that he hopes will be able to get their church fixed quickly.

“Now we have to work on it, to get the insurance company to take care of it,” Pastor Marimuthu said after emerging from the soaked sanctuary. “I’m very positive about the recovery. It’s mostly water and debris inside — it’s really not bad inside. I’m hoping we can get it cleaned up soon.”

Buildings officials kept people clear from the most vulnerable parts of the steeple, and have suggested that a sidewalk shed be installed to protect workers and congregants. It has yet to be determined whether the entire steeple will need to be removed or just be stabilized. Officials used an FDNY bucket to make a closer inspection, but final determinations will be made later, officials say.

Parishioner Varmidiara Beadasie  was at the scene at 7:30 p.m. and was helping on Thursday morning carry musical instruments out of the church, trying to salvage church property that they can continue to use provided it remains dry.

“It makes me very sad to see it this way,” Beadasie said.  “Yes, it was an act of God but as human beings, we hurt to see this. It seems that the structure of the building is pretty much good. We thank God it’s not worse.”