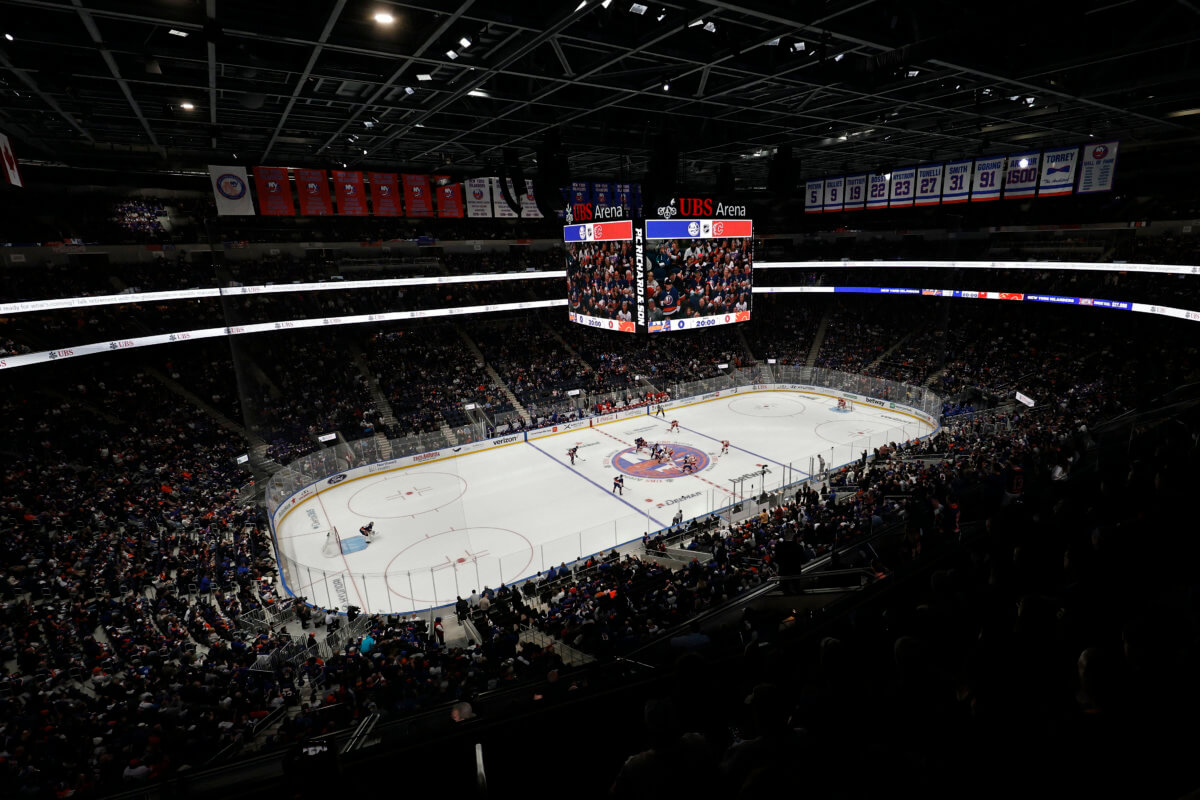 ELMONT, N.Y. — Shortly after 6:30 p.m. on Tuesday night the Belechto family walked into UBS Arena to enjoy their first time inside the Islanders’ barely one-year-old arena. After having their tickets scanned at the door, they were ushered by an Isles representative over to another area of the Grand Hall where Sparky was waiting along with a stream of confetti and co-owner Jon Ledecky.

The Islanders were celebrating hosting their one-millionth fan, which ended up being Jennifer Belechto who was attending the game with her husband and two daughters, to enter the barely one-year-old arena that first opened its doors on Nov. 20, 2021. Now, 61 games later the building has welcomed in more than a million hockey fans.

The plight of the Islanders’ journey to Belmont Park, where the $1.1 billion arena stands just near the Nassau County-Queens border, has been well documented as has been the roller coaster ride the fan base has been through because of it.

“I mean, it’s great. I’ve always loved the Islanders,” Randy Belechto said about the building. “And I feel like no matter where the islanders play I’m gonna love them. It’s great to be in this building and see them play.”

In Elmont tonight where the #Isles have welcomed their 1 millionth fan. pic.twitter.com/APQOifVIRF

While there has been jubilation among fans that the Islanders finally have stabilized their future with a new building and an ownership group that has proven its commitment to running the franchise the right way, there was a natural transition from life at Nassau Coliseum to life at UBS Arena. And like any move, it took some time for the building to feel familiar.

“The Coliseum was home but I think this is a great step in the right direction,” Anthony O’Brien said on the UBS Arena concourse. “It’s nice to finally have a place that the Islanders call home officially as opposed to sharing it with anybody else.”

The team has worked out a lot of the issues of the first year as they hurried to open the arena on time in November of 2021. The parking situation has been improved along with the completion of the new Elmont LIRR stop and other aspects around the inside of the arena.

“I think they’re still learning and growing,” Islanders fan Joe Voce said from his seat in section 110, while referencing the added food options.

“I think it was more of a slow transition,” Voce said about UBS feeling more like home. “Where it’s not like a light switch, it’s more like the more you come here the more you love it. Again they have some things to improve on. … But yeah, it’s a gradual love for the stadium. It’s just cleaner, nicer and foods incredible. It’s a little pricey, but the Islanders are still on Long Island, which is awesome.”

Leddecky said that he has heard from fans constantly when he walks around the building. When asked if he had heard that the fans were feeling more and more at home in UBS, he mentioned how the fans he has talked to haven’t been shy about telling him what can be improved on.