BY HERBERT LASH AND ELIZABETH HOWCROFT

Global equity markets slumped and investors piled into safer gold and the Japanese yen on Friday after U.S. President Donald Trump and his wife tested positive for the coronavirus, adding to market uncertainty just 32 days before U.S. elections.

Gold headed toward its best week in nearly two months while the Japanese yen made its sharpest gain in more than a month. But the benchmark 10-year Treasury note rose mildly, entrenched in a narrow trading range it has held for three weeks.

How long the risk-averse moves will last depends on the extent of the infection within the White House, said Francois Savary, chief investment officer at Swiss wealth manager Prime Partners.

“We may have to wait until the end of the weekend for more clarity on the situation,” he said.

“It will weigh on the market today and early next week but will not induce a long-lasting correction if the infection is contained to Trump,” he added.

When it comes to stock market shocks, the assassination of President John F. Kennedy on Nov. 22, 1963, saw the S&P 500 plunge nearly 3% and Wall Street shut down the New York Stock Exchange at 2:07 p.m. EST. But the losses were confined to a single day and the market recovered within two days. 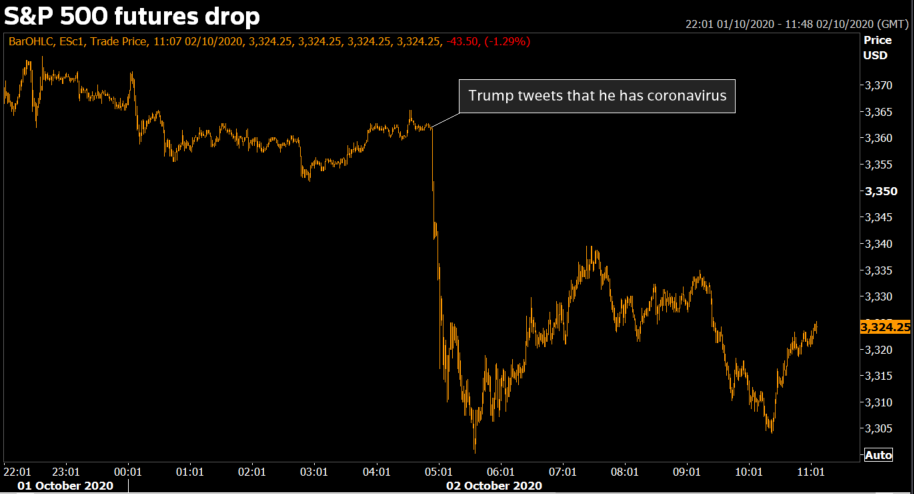 The Labor Department’s closely watched employment report on Friday was the last before the Nov. 3 presidential election.

September’s employment gains were the smallest since the jobs recovery started in May and left the U.S. labor market a long way from recouping the 22.2 million jobs lost in March and April, indicating slower growth heading into the fourth quarter.

“The recovery continues but at slower rate in part because the government stimulus has diminished significantly,” said Sung Won Sohn, a finance and economics professor at Loyola Marymount University in Los Angeles.

With the election now more uncertain than before, online gambling site Betfair on Friday suspended betting on the outcome of the Nov. 3 vote.

The Australian dollar, which serves as a liquid proxy for risk assets, was down 0.23% <AUD=D3>.

“Depending on how this situation evolves over the weekend, notably if more members of the U.S. government’s senior leadership are diagnosed positive, gold could be set for an extended rally,” said Jeffrey Halley, a senior market analyst at OANDA.