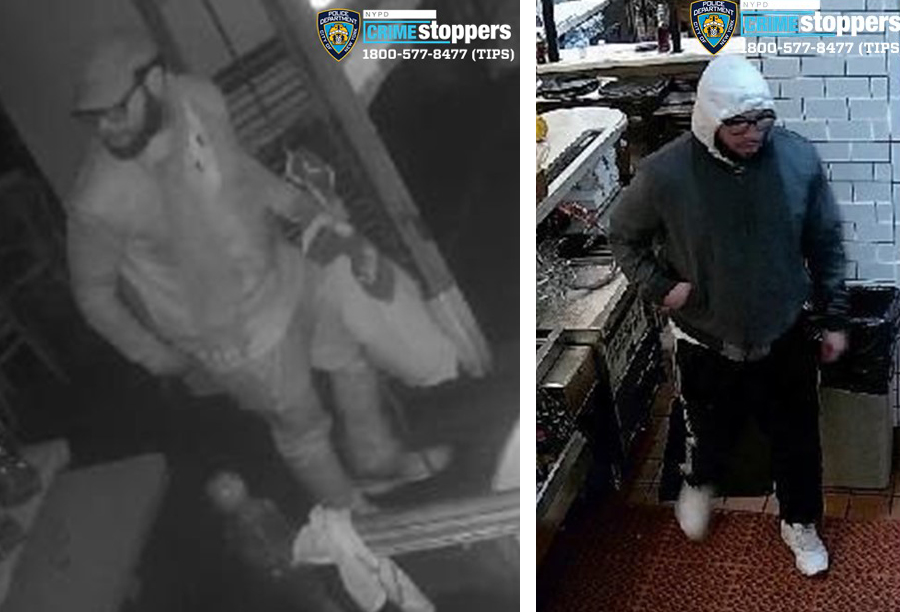 Security camera images of the suspect behind a string of recent burglaries at Manhattan businesses. (Photos courtesy of NYPD)

Cops need the public’s help in finding a burglar who busted through a dozen eateries across Manhattan since mid-November.

Each of the capers have taken place during late-evening and early-morning hours, from about 11 p.m. to about 6 a.m. The crook — a man in his 30s with a medium build and eyeglasses — usually forces his way inside the front door, going as far as to kick it down or pull it enough times to snap the locks.

The most recent caper occurred at 1 a.m. Sunday, Dec. 1, at the Left Bank Diner, located at 117 Perry St. in Greenwich Village. Law enforcement sources said the burglar smashed open the glass front door, then went inside and removed electronic tablets, a liquor bottle and $200 in cash.

The other break-ins, in chronological order, are as follows:

On Dec. 3, the NYPD released video footage of the perpetrator taken from the Nov. 20 incident. Police said he was last seen wearing a gray/dark green jacket, a light-colored hooded sweatshirt, black Adidas sweatpants and white sneakers.

Anyone with information regarding the burglary pattern or the suspect’s whereabouts can call Crime Stoppers at 800-577-TIPS (for Spanish, dial 888-57-PISTA), visit the Crime Stoppers website or send a direct messages on Twitter @NYPDTips. All calls and messages are kept confidential.