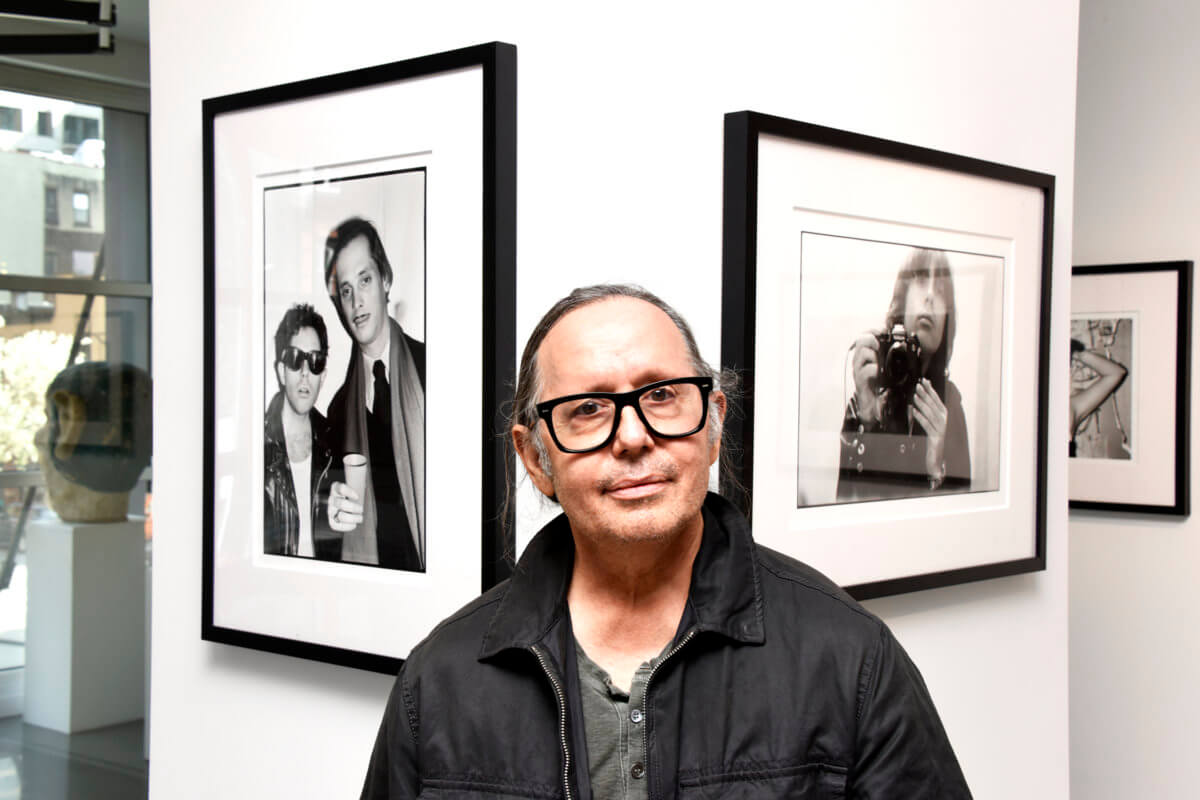 Bobby Grossman at solo show “Low Fidelity”, between vintage images of himself. On the left he is pictured with John Waters
Photo by Bob Krasner

There’s a chance that if you were hanging around downtown NYC in the late 70’s/early 80’s with a camera, you’ve got some cool shots of your friends that are sitting in a scrapbook somewhere. Bobby Grossman certainly does, but his friends were Chris Stein, Debbie Harry, Jean-Michel Basquiat, David Byrne, Andy Warhol — you get the idea.

Taken mostly between 1976 and 1983, the silver gelatin prints on the wall in his new solo show “Low Fidelity” at the Howl! Arts/Howl! Archive are a look into a somewhat unseen stash, as the images have not been as widely disseminated as those by some of his peers. About 25% of the pics on the walls have never been published before.

Most of the images were taken not for assignments or even documentary purposes, but simply because Grossman liked taking pics of his world, sometimes using photography as an ice-breaker.

“I am basically a shy person,” he admits. “It was easier to meet people with a camera.”

After studying art at RISD, Grossman landed in the Chelsea Hotel in room 911, across from the legendary composer Virgil Thomson. Working for his father’s shirt factory gave him an income which he supplemented with illustration assignments from publications such as Rock Magazine, Rolling Stone, Soho Weekly News and a few “girlie mags” before going on to become illustrator Richard Bernstein’s assistant.

But “going out in the evening became more important,” he mused. “I was at the right place at the right time. I feel very fortunate to have been there – little by little I managed to meet everyone that I wanted to meet.”

While Grossman had a feeling that his images had some value, it was seminal hip-hop artist Fab 5 Freddy who drove the point home. “What you’re doing is very important,” Freddy would remind him. “And he was right — look at the archive that I’ve got 40 years later.”

Looking at that work hung at Howl!, one is engaged in “an intimate, amazing journey through NYC’s underground art and music scene,” according to Cynthia Sley, founding member of the Bush Tetras.

Godlis, the photographer known for his iconic late night available light images taken in an out of CBGB’s, appreciates the completely different approach taken by Grossman, who almost always used a flash.

“His quick effortless shooting style was really an artist’s statement in itself,” he opines. “He shot pictures like his life was changed by rock and roll.”

Whitney Newman, an artist who came from Atlanta to attend the opening, noted that “these images were born here and it’s like they have come back home — this event is like a long awaited, joyful reunion.”

For some though, it’s a bittersweet experience. Patti Astor, co-founder of the first East Village gallery, “Fun Gallery,” looked around and said,” I’m close to tears – it’s not like looking back, it’s like being there again. To me they’re just my friends, and so many are gone.”

Musician and painter Walter Steding, represented by a portrait from 1979, is one still standing and was clearly delighted to be there.

“It’s just wonderful!” he exclaims. “It still feels fresh. Look at that shot of Jean-Michel — he’s sitting on a chair that I still own.”

It’s not just the veterans of the scene who appreciate Grossman’s work, though.

Twenty-one year old Emily Pavis chose to write about the photographer for a New School assignment after discovering him through the son of the late writer Glenn O’Brien — who was known for, among other things, being the first editor of Warhol’s “Interview” magazine and creating the local cable show “TV Party,” where Grossman was “unofficially the official photographer.”

“Bobby’s photography genuinely means so much to me,” Pavis shares. “The pictures shed light on a time period that seems so distant from today. Candid photos of William S. Burroughs, Andy Warhol and Debbie Harry that expose creativity and artistry before the distractions and implications of social media and digital technology. They also serve as a time capsule to commemorate and remember those we have lost.”

Grossman left the scene for awhile, living in Florida where he “took a zillion pics of my dog” and planned for a book that is just now becoming a reality, about 12 years after he began to put it together.

With the help of The Waverly Press and a just announced Kickstarter effort, the planned 224-page opus will include a cover photo of Debbie Harry that Shepard Fairey used as the basis for his Blondie mural on Bowery and Bleecker, as well as shots of Lou Reed, David Bowie, Iggy Pop, Alex Chilton, Andy Warhol and many more.

Dagon James, Grossman’s editor at Waverly, expressed his enthusiasm for the project.

“We live in an age where virtually every notable photograph has been seen and every story told countless times, ” he notes. “It’s rare that someone like Bobby Grossman comes along with a vast, largely unseen archive from this important period when art, music and fashion were being reshaped and redefined. “Low Fidelity” is a book that offers a rare opportunity to give those who have seen it all something new.”

As for Grossman, he’s celebrating 30 years of sobriety, looking forward to the publication and counting his blessings.

“I’m still here,” he says. “And most of the people on these walls are gone.”

Learn more about Bobby Grossman at bobbygrossman.com or on Instagram @bobby_grossman. For information on his show, visit howlarts.org.