Op-Ed | Cracking down on fake license plates is criminalizing poverty 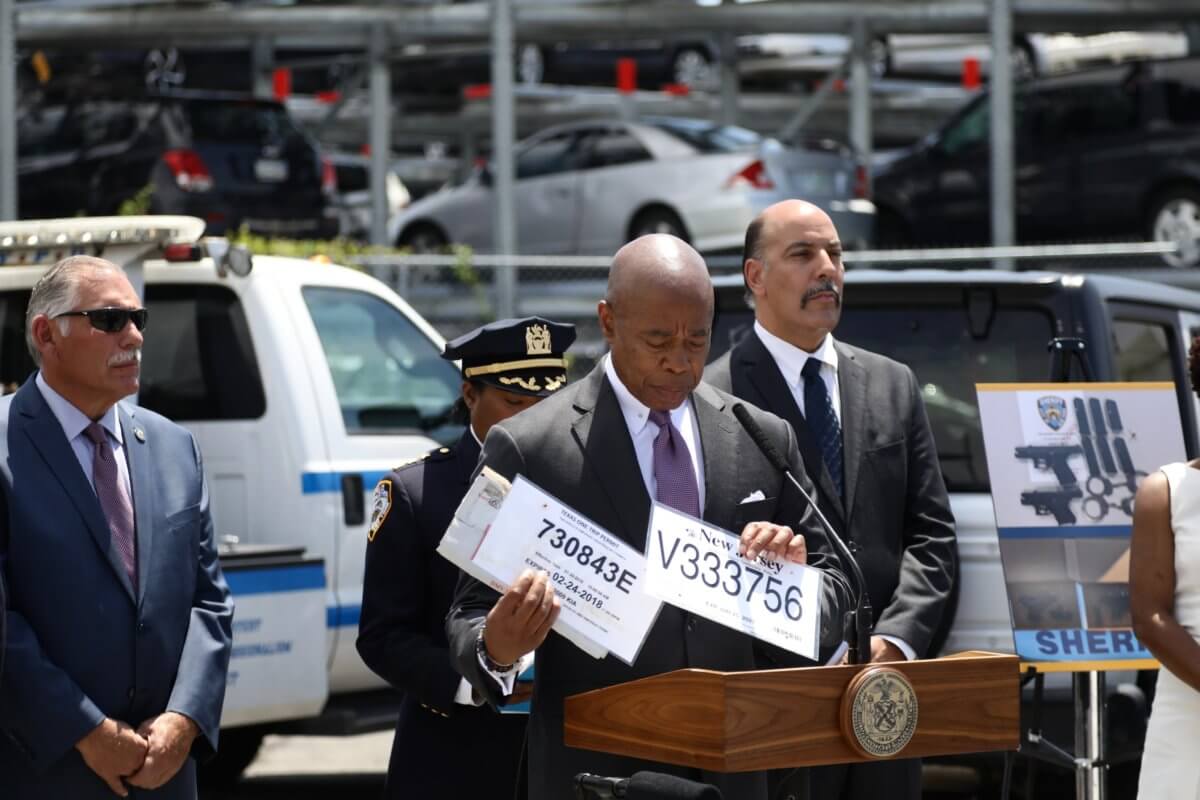 Mayor Eric Adams holds a couple of phony license plates at a briefing in Queens on July 5, 2022.
Photo via Twitter/@nycgov

Last month, Mayor Adams held a press conference announcing the NYPD’s new crackdown on cars with fake license plates. Fake plates, he explained, are used by scary people who smuggle guns and drugs, and by scofflaws to cheat the bridge tolls. The solution: arrest them and seize their vehicles. Take that, smugglers and ne’er-do-wells!

His pitch sounds compelling. Unfortunately, it’s absurd. I am a public defender in Queens, where I have represented dozens of people charged with this offense. The reason my clients have fake license plates has nothing to do with guns and drugs. It is because they cannot afford real ones.

In New York City, car insurance averages $2,500 to over $4,000 a year. Registration and inspection cost another few hundred. You need all three to get a legitimate license plate. Low-income New Yorkers simply cannot afford these costs after paying more than half of their income in rent and ever more on food and utilities. Many of them, however, must drive. They need to get to work and to access essential services such as hospitals and groceries. And they live in the farthest-flung parts of the city—the only places they can afford to, and where public transit is sparse, or even nonexistent.

This crackdown on fake license plates is criminalizing poverty, plain and simple.  Regrettably, such practices are endemic in our criminal justice system. A wealthy person receives the same speeding ticket as someone with no financial means—but only the latter will have their license suspended when they cannot pay the fine. Many states entitle people to expunge old criminal convictions from their records, but require that they pay hundreds of dollars in application fees to do so. Wealthy people can afford criminal justice diversion programs: often costly classes and monitoring that allow people charged with crimes to avoid prosecution and conviction. In addition, modern day debtors’ prisons incarcerate people who cannot afford court fines, fees, and restitution payments. To penalize people for their poverty is morally unconscionable and socially counterproductive: study after study shows that burdening poor people with administrative fines and fees has crippling economic effects, stymies social mobility, and is a highly inefficient means of raising municipal funds.

What should we do instead?

First, stop penalizing poverty. Americans should be able to afford essential services. Of course we want every driver to have insurance, register their vehicle, and pay their tolls. Our current system, in which everyone pays the same (in fact, lower-income people pay more for insurance because they usually have worse credit), is clearly not getting us there. We should scale fees and fines by income. In general, government should end any practice that disproportionately burdens people living in poverty.

Second, we must demand smart policies from our politicians and law enforcement. Mayor Adams’s assertion that the license plate initiative will help ferret out guns is preposterous. The police claim that they found five guns in over 800 cars they seized for fake license plates over the past year. That’s a 0.6% hit rate—less than half of the 1.5% under the NYPD’s erstwhile stop-and-frisk program that a federal judge struck down as a “deliberate indifference to constitutional deprivations.” Then, as now, “guns and drugs” are not magic words that can be used to justify any disruption of life, liberty, or property. Tearing someone’s car apart because they have a fake license plate is invasive, destructive, and not a reliable way to find illegal weapons.

This fake license plate initiative is an easy way for the NYPD and Mayor Adams to say they are doing something about guns. Meanwhile, the steps to really decrease the presence of illegal guns and gun violence are hard: build strong connections in communities, grounded in trust and respect, rather than punishment and fear. Provide support to youths who struggle with trauma and inadequate support systems. Invest in education and infrastructure in low-income communities.

Try again, Mayor Adams. Stop using our vast police resources to make the lives of low-income people harder. Instead, use them to make us safer.

Ethan Lowens is a public defender in Queens.