By amNY News & The Villager
comments
Posted on November 3, 2020 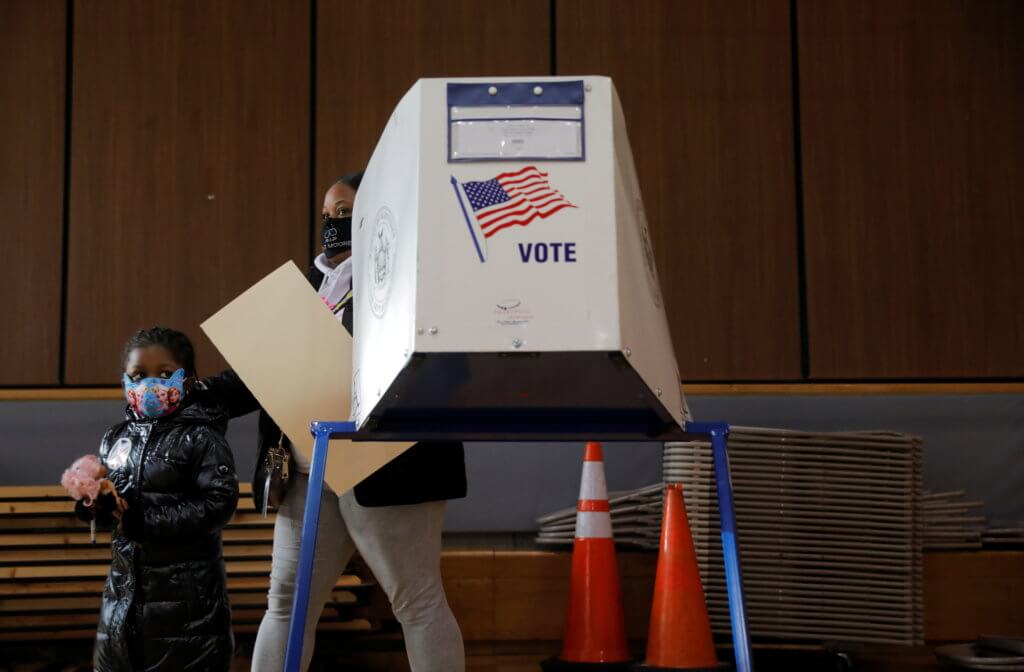 Adelaide Hart, 5 exits a privacy booth with her mother Davina Moore as she votes on Election Day at the James Weldon Johnson Community Center in Harlem on Nov. 3, 2020.
REUTERS/Andrew Kelly

Today is the day.

Polls across New York City opened at 6 a.m. Tuesday morning for Election Day, the final chance for New Yorkers to have a say in the 2020 presidential election between Donald Trump and Joe Biden, along with other down-ballot races.

After a successful early voting period in which more than 1.1 million voters cast their ballots between Oct. 24 and Nov. 1, long lines of voters were nonetheless reported at many polling sites on Nov. 3 when voting began.

Talking to voters in Chelsea. At a polling site on W.23—across the street from a Peloton with boarded up windows—one voter told me he “ just wants to get the election over with” and another with tears in her eyes told me “ I can’t believe this day is finally here. pic.twitter.com/lPRoFag8OO

At St. Anthony of Padua Church in SoHo, the line began forming before the crack of dawn. They braved dark lonely streets, with a bit of a chill, to get in line to vote prior to when the polls on election day opened at 6 a.m.

Greenwich Village resident Gerald Liu with his service dog arrived at 5 a.m.; he was the first in line.

“I think I arrived too early,” he said, realizing that the rush to wait in line or at least at this hour wasn’t as extreme as Early Voting lines had indicated. The second in line arrived at 5:15 a.m.

When some of these very early arrivals were asked why didn’t they participate in early voting, they echoed a common sentiment — they wanted to vote “on election day.”

One West Broadway resident said, “I wanted to make my thumb purple.” And where do they do that?  “Afghanistan,” was his response. During elections in Afghanistan following Operation Enduring Freedom, voters there dipped their fingers in ink to show that they had participated in the election.

Parents with a couple of children in strollers were among the very early line waiters. Local community activist and former Greenwich Village District Leader Keen Berger arrived as the poll opened and offered those in line her renowned chocolate chip cookies.

Tuesday’s poll sites in Lower Manhattan were quiet as voters, who clearly cast their ballot early, trickled in and out.

At JHS 56 in Chinatown, the poll site had only seen about 100 visitors by 10:30 a.m. — a big difference from the hour-long lines that wrapped around the entire block during the early voting period.

Stopped at Bayard Rustin High School on W.18 where voters waited outside for 30 to 40 minutes this morning. No line outside now and voters are spending about 15 minutes inside. pic.twitter.com/A2s21RY95S

Polls will be open until 9 p.m. Tuesday night. The Board of Elections will then begin reporting results from today’s vote as well as the early voting period, but there are more than a million mail-in absentee ballots requested that must be verified and counted.

For some contests — such as the hotly-contested 11th Congressional District race between Democratic Congressman Max Rose and Republican Assemblywoman Nicole Malliotakis in southwest Brooklyn and Staten Island — the outcome might not be known for until two weeks, until all the ballots have been counted.

The same could be said for the presidential race itself, in a year where more Americans than ever before voted by absentee ballot due to the COVID-19 pandemic. As in past elections, the winner is declared after all the ballots are counted, though Election Night projected winners may be called by media outlets such as the Associated Press.

In Queens, over 250,000 voters in Queens cast their ballot early – accounting for about 22 percent of all the early votes cast in New York City. Some polling places across Queens Tuesday morning appeared to be in strong contrast to the lines seen throughout the 9 days of early voting.

In some locations, like P.S. 150 in Sunnyside, there wasn’t much of a wait to cast a ballot. With a small line forming occasionally outside, voters assigned to the polling place made their way in and out with little time wasted.

However, just down the block at Queen of Angel’s Parish Center in Sunnyside, the lines were a little longer.

Voters waited up to 40 minutes to cast their ballots, including Clara Demedinaceli, who brought a chair to the polling site.

Many Brooklyn voters were spotted flocking to their polling sites to get ahead of the line before the polls opened at 6 a.m., but many of sites’ lines have been shorter than they were during early voting. While the mayor and several other Brooklynites stood in line for hours for early voting, many polling places were pretty empty on Tuesday morning. The Barclays Center in Prospect Heights, Brooklyn New School in Carroll Gardens, and City Tech in Downtown Brooklyn also had little to no lines on Tuesday morning.

Reports of voter harassment began Tuesday morning. Outside MS 88 in South Slope, an unmasked man with a Trump flag waving from his car screamed at voters entering and exiting the site at around 9:50 am. The man was heard telling voters to “go get some Vagisil,” and was filmed threatening voters with violence.

“There was a clear threat of physical violence,” said Kathy Park Price, a Park Slope resident working as a poll watcher.

According to Price, authorities on the scene did little to deescalate the situation and eventually had a “friendly conversation” with the heckler, who thanked police profusely before leaving on his own accord at around 11 am.

“It felt like they were there to protect him and not the democratic process … it was shocking to see,” Park Price said of the Police Department’s response, adding, “You can’t ignore the fact that once he got out of his car, threatened physical violence, was belligerent and harassed multiple voters, it was absolutely an act of voter intimidation.”

The incident comes after the mayor assuaged voters on Monday that election officials would put an end to any voter intimidation.

“The Election Observer Corps is going to be out there in force — over 500 volunteers, lawyers and city officials, people who are giving their time of themselves to make sure the election is accurate, safe, no one is intimidated, no one is harassed,” de Blasio said.

The NYPD’s official Twitter account later tweeted that the responding officers found the vehicle to be at an appropriate distance.

“Upon investigation, the vehicle was an appropriate distance away. There was no interference with voting,” the Department said. The tweet made no mention of the man’s menacing, or his threat to put a voter “in the hospital.”

Up in the Bronx, many polling places were not as busy as they were during the early voting period. Voters headed to the polls to cast their ballots.
An adult son went to vote with his senior parents at John D. Calandra school in Waterbury-LaSalle credited the substantial turnouts of early voting for what he and his family described as a fast and easy morning at the polls. Another mother brought her nineteen-year-old daughter for her first ever vote saying they elected to vote in person so she could “feel what it’s like” to literally participate in democracy and make a personal statement by literally and tangibly voting on what is a historic election day.

Another woman said she was on the fence about voting in a “bad or worse” election before entering into the school on Tuesday morning, but ultimately came around in hopes that national unity is to come in the next few weeks.

amNewYork Metro and its affiliates — QNS, Brooklyn Paper and Bronx Times — has reporters scattered across the city Tuesday morning visiting poll sites and engaging with voters. Stay tuned for more updates as the day goes on.