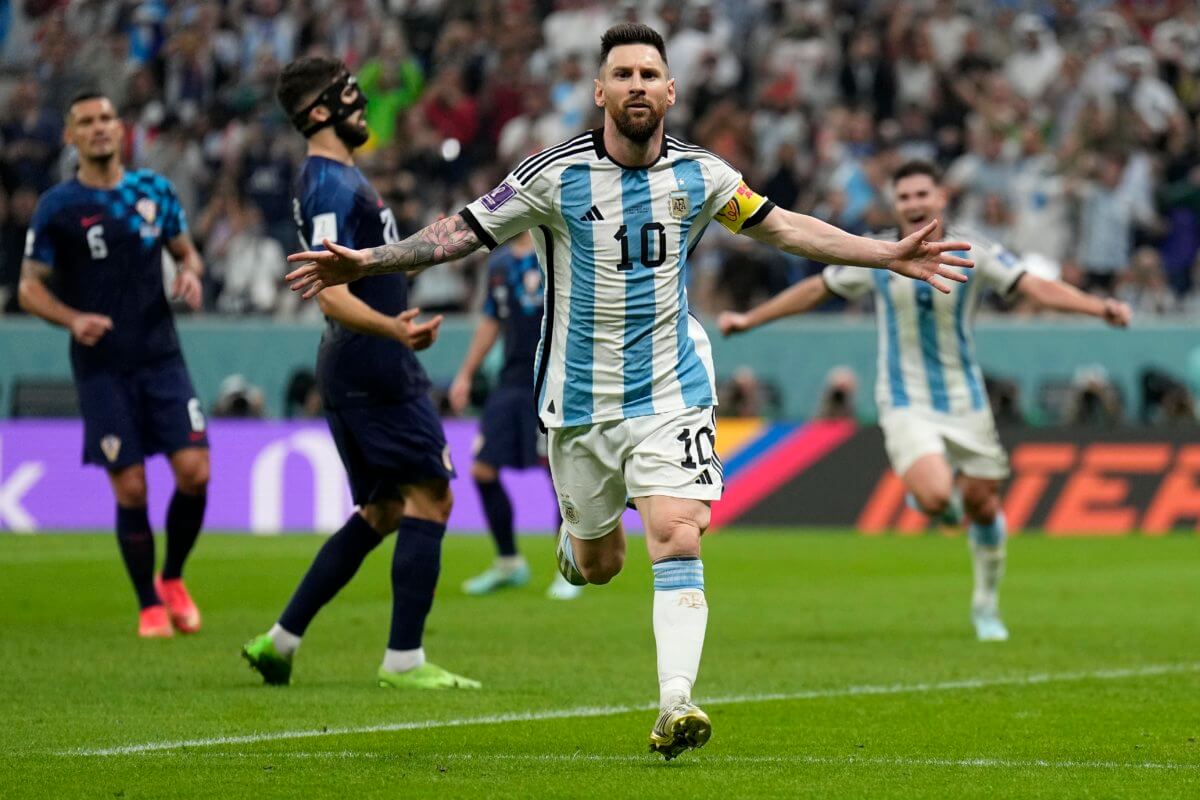 In his fifth-ever World Cup, Lionel Messi will once again have a chance to play for the most famous trophy in sports.

The little maestro scored his fifth goal and added a fourth assist at the 2022 tournament in Qatar while Julian Alvarez recorded a brace to lift Argentina to a 3-0 victory over Croatia in the World Cup semifinals at Lusail Stadium on Tuesday.

It’s the second time in three World Cups that Argentina is headed to the World Cup Final. It lost to Germany eight years ago in Brazil.

While the 35-year-old superstar has a chance to wrap his international career with the most glorious of bows — Argentina now looks to win its first World Cup since 1986 when it takes on the winner of France or Morocco on Sunday — it’s vital to spare a moment for Luka Modric, another giant of the game who helped establish Croatia and its population of just 4 million a world soccer superpower.

Tuesday’s semifinal was Mordric’s final game at the World Cup as the 37-year-old helped lead his side to the final four in Qatar after reaching the Final in Russia four years ago.

Both he and Messi had won practically everything else there was to win on their respective domestic stages, whether it be league titles, Ballon d’Or trophies, or Champions League crowns — but now it’s Messi who finally has an opportunity to move out of the shadow of fellow Argentinian great Diego Maradona, who won two World Cups during his reign as one of the world’s best.

Out of nothing, in the 32nd minute, a long ball beat the Croatian defense over the top and was played perfectly into the path of Julian Alvarez. His chip past an upright, sprawling Livakovic didn’t have enough to reach the goal as it was cleared off the line, but the Croatian keeper barreled into the Argentinian attacker for a penalty.

Up stepped Messi in the 34th minute, who drilled a searing penalty into the top-right corner of the goal that Livakovic — who guessed the right way — had no chance of reaching.

TOO EASY FOR MESSI 🐐

HE PUTS ARGENTINA OUT IN FRONT IN THE SEMIFINALS 🇦🇷 pic.twitter.com/bUSJIBlsYK

The tally was Messi’s 11th career World Cup goal, moving him past the legendary Gabriel Batistuta for the most World Cup goals scored by an Argentinian.

Just five minutes following Messi’s goal, in the 39th minute, Argentina’s lead was doubled thanks to a lightning-quick counterattack that developed into one of the best World Cup goals you’ll ever see.

Following a Croatian corner, Alvarez took the ball nearly 70 yards from Livakovic’s goal and went on a barnstorming, marauding run right down the center of the pitch. He went through three Croatian defenders as he entered the box, including an assimilating touch with his chest to settle a deflection off a sliding Borna Sosa just six yards from goal. From the chest, a leaping right-footed effort found the back of the net.

JULIAN ALVAREZ WHAT A GOAL 😱

La Albiceleste nearly had a third three minutes later when Nicolas Tagliafico glanced a header from a corner at to the near post, but Livakovic managed to get a piece of it and just keep it out.

Despite Croatia coming out in the second half and desperate to get back in it, it was Argentina and Messi that had a golden chance in the 57th minute when Messi was played down the left side of the box with a defender on his back. He got a good shot off toward the near post, but Livakovic turned it away.

Messi magic reigned supreme in the 69th minute, however, as he went to work against one of the top youngsters at the tournament in Croatian center-back Josko Gvardiol. Down the right wing, he faked Gvardiol out to streak down the goal line where he sent a perfect centering feed to an on-rushing Alvarez, who finished in the bottom-left corner of the goal to finish it off for Argentina.

It was Alvarez’s fourth goal at the 2022 World Cup, which is double the amount of goals he had scored in international play with Argentina before the tournament.

As the final 20 minutes were played out, Modric was given a well-deserved send-off in the 80th minute when he was subbed out to a standing ovation from both sets of fans — a true sign of respect for one of the best this generation has ever seen.

For more on the World Cup, Argentina, and Lionel Messi, visit AMNY.com