Note: if you purchase something through one of our affiliate links, Schneps Media may earn a commission.
By AP, with reporting from Aidan Graham
comments
Posted on September 5, 2022 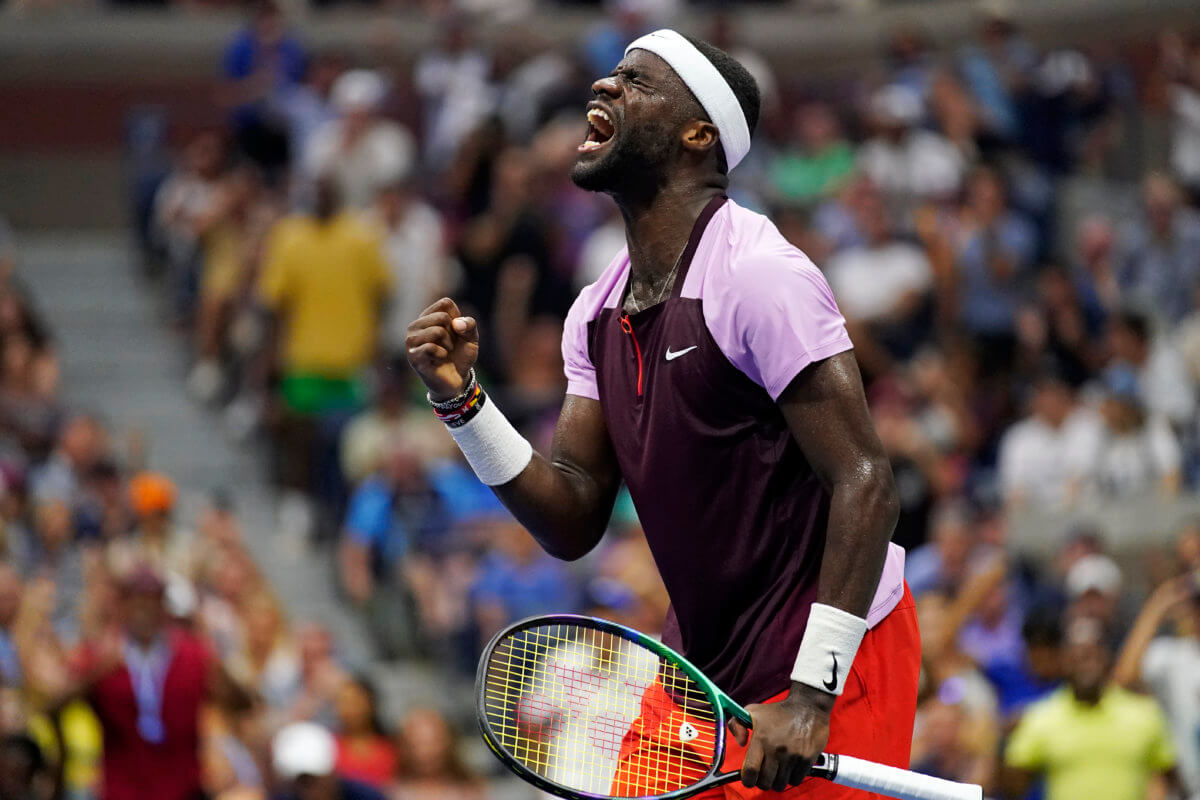 Frances Tiafoe, of the United States, celebrates after winning a point against Rafael Nadal, of Spain, during the fourth round of the U.S. Open tennis championships, Monday, Sept. 5, 2022, in New York. (AP Photo/Julia Nikhinson)

American Frances Tiafoe pulled off a stunning episode on Monday, toppling Rafael Nadal in the round of 16 at the US Open and advancing to the quarterfinals with a 6-4, 4-6, 6-4, 6-3 win.

Entering the tournament seeded as the 22nd-ranked player in the world, Tiafoe came into the round of 16 as the last remaining American male in the tournament.

He was already the first American man to reach the fourth round in three straight years since Mardy Fish in 2010-12. But the 24-year-old is now the youngest American to reach the quarterfinals since Andy Roddick did so at 24 in 2006.

It was a huge upset and one that will drastically reshape the entire men’s draw for the remainder of the tournament.

Nadal, a four-time US Open champion, was the highest-seeded player left after No. 1 Daniil Medvedev lost to Nick Kyrgios on Sunday night. Nadal had previously won the last 22 Grand Slam matches he played in, including winning the title at the Australian Open in January and the French Open in June.

He was also 21-1 against Americans since October 2017, which included straight-set wins over Tiafoe in the 2019 Australian Open quarterfinals and 2019 Madrid third round. In fact, the American had never won a set off of Nadal coming into their matchup today.

But sometimes all you need is one day.

Tiafoe attacked Nadal all game. Despite only connecting on 50% of his first serves, he hit 18 aces and won 76% of points where he got his first serve in. He also pounded the Spaniard with groundstrokes all game, collecting 49 winners to just 33 from his opponent.

“Yeah, it was definitely one hell of a performance,” beamed Tiafoe after the match. “I played really well today. Yeah, I guess, I mean, I just came out there and I just believed I could do it.”

The underdog was also able to capitalize when opportunities arose. He converted five of his eight break points against Nadal, while the favorite was only able to win two of his six chances.

“I played a bad match and he played a good match,” explained Nadal. “At the end that’s it, no?I was not able to hold a high level of tennis for a long time. I was not enough quick on my movements. He was able to take the ball too many times very early, so I was not able to push him back.”

However, that doesn’t quite capture just how good Tiafoe was. A night after we saw Nick Kyrgios destroy the number one player in the world, the 24-year-old American absolutely outplayed Nadal today.

After the last backhand by Nadal found the net to secure victory for the American, Tiafoe put his hands on his head. When he sat in his sideline chair, he buried his face in a towel.

With the victory, he became the first American to beat Nadal in a Major match since he was ousted by James Blake in the 2005 US Open. Nadal has also never come back from down 2-1 at the U.S. Open and fell to 0-7 when facing that deficit at Flushing Meadows.

“He played well,” Nadal admitted. “As I said, he did a lot of things very well. But if you want to be in the quarterfinals of the US Open, I need to do things better. It’s clear. I was not able to do anything, any of these things this afternoon. So he was able to do it. He played with the right determination, yeah. Congrats to him. Wish him all the very best.”

Beating Nadal and advancing to the quarter-final of a Grand Slam is a tremendous tremendous achievement for any tennis player, but it’s particularly special for Tiafoe given how hard he’s had to work to get here.

“I’m a son of immigrants, both parents grew up in Sierra Leone, born and raised in Sierra Leone. Came to the States early ’90s, late ’80s, around there. My dad, being a maintenance worker at a club, help building a club ’99. My mom being a nurse, working two jobs, working overtime through the nights.”

“Being around tennis was kind of gets us out of our neighborhood. My dad kind of being able to watch us. It wasn’t anything supposed to be like this. Once we got into the game of tennis, my dad was like, ‘It would be awesome if you guys can use this as a full scholarship to school.’ I mean, we couldn’t afford a university. So use the game of tennis.”

Use the game of tennis he did. To get to heights that even he didn’t think were possible.

“At that time watching Serena and Venus play finals of Grand Slams at that time, when I was super young. I was like, how cool would it be to play Wimbledon, to play on Arthur Ashe and stuff like that.”

The American will now play Russian Andrey Rublev, the 9th-ranked player entering the tournament, on Wednesday.

“So now, it’s something to tell the kids, the grandkids,” said Tiaofe. “Yeah, I beat Rafa. Hopefully, I never play him again, but hope I end with a win.”