Investors eyeing a turnaround in the U.S. economy are piling into U.S. bank stocks even as some caution that positive stress test results and an abatement of loan losses will be needed to sustain a rally in the battered sector.

The S&P 500 bank index <.SPXBK> has kicked off June with an 8% advance so far, following a two-day rally of 15% last week. Banks are sensitive to consumer and business spending so the stocks were slammed by the coronavirus-related economic slump.

The bank index soared 5% Wednesday after U.S. private payrolls declined less than expected in May, suggesting that layoffs were abating as businesses reopened due to easing of stay-at-home restrictions related to COVID-19.

Banks have also been helped by renewed interest in value stocks over growth investments. Optimistic comments from banks had helped the sector last week, including JPMorgan Chase <JPM.N> Chief Executive Jamie Dimon’s forecast that reserve increases for loan default protection could taper in the third and fourth quarter.

Second-quarter earnings are expected to be bleak and investors are eagerly waiting the completion of annual stress test, due by June 30, as the results determine how much capital banks can return to shareholders.

But some portfolio managers are already betting on 2021 earnings improvements, assuming banks have shouldered most of the economic cycle’s loss-reserve increases by then.

“There’s optimism things will be better a year from now. And because banks have trailed just about everything else in the market they’re being dragged up,” said Rick Meckler, partner at Cherry Lane Investments, in New Vernon, New Jersey.

Even after the current rally, the S&P bank index is one of the biggest industry laggards this year with a 30% decline, compared to the S&P 500’s <.SPX> 3% drop.

There are concerns dividends could be suspended if the Federal Reserve requires more capital reserves after the stress test, said Michael Cronin, investment manager for US equities at Aberdeen Standard Investments.

“Banks seem optimistic they’ll be able to continue to pay dividends and they’re advocating for paying dividends but the question is still out there and it’s still weighing on valuations,” said Cronin. 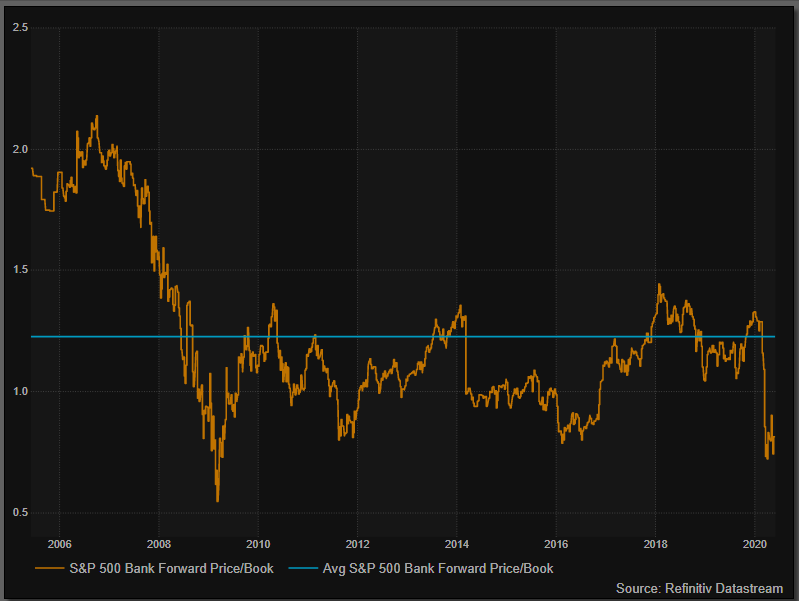 The banks sector’s forward price-to-book ratio, comparing prices to book value estimates, tumbled starting in February as the coronavirus pandemic scared off investors. In April, it hit a trough of 0.72 – the sector’s lowest valuation since the 2009 financial crisis.

The ratio has since risen to 0.81 but still looks like a bargain to money managers versus the historic average of 1.22.

“A lot of the negativity is reflected in current valuations, which is why there’s a lot of upside compared with other industries” said Ryan Lentell, portfolio manager at Manulife Investment Management.

Cronin at Aberdeen Standard is still watching the direction of credit costs, which will depend on whether there is a second wave of coronavirus cases and more lockdowns.

“Until we get some clarity on the stress tests and credit, it’ll be a lot harder to move materially higher in the near term,” said Cronin.

U.S. fiscal stimulus and Federal Reserve support, including interest rate cuts, appear to have put a “backstop” behind bank balance sheets, according to Fred Cannon, head of research at Keefe, Bruyette & Woods.

But Cannon questions how sustainable the rotation will be. And since bank profits depend partly on higher interest rates, Cannon sees a limit to gains in the sector.