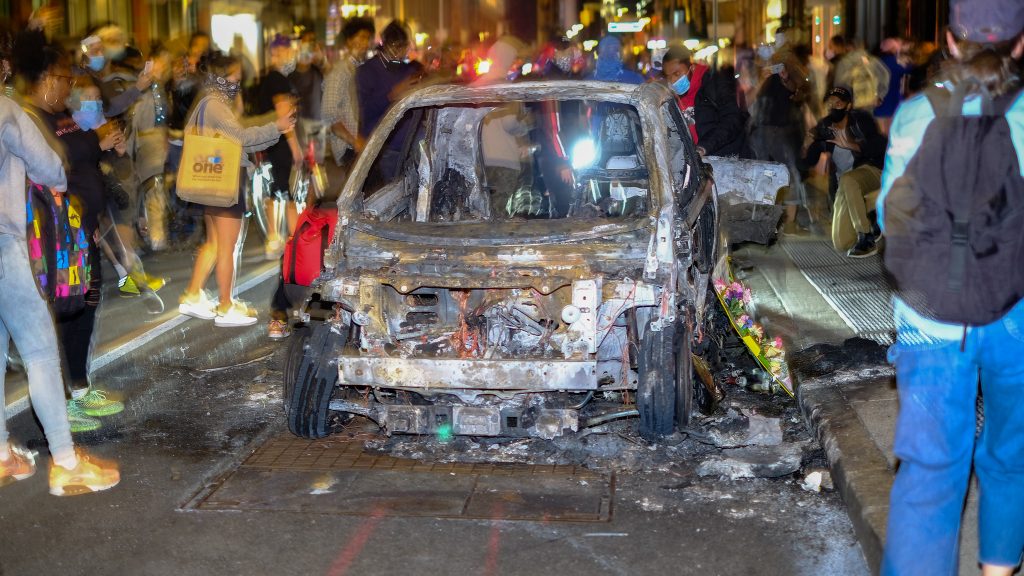 A burned out NYPD Smartcar on Broadway during a protest on May 31, 2020. (Photo by Mark Hallum)

During an interview with Albany-based radio program WAMC Monday afternoon, Governor Andrew Cuomo said there will be a curfew in New York City in response to four days of George Floyd protests in the city filled with looting, fires and scuffles with the police.

The curfew will begin at 11 p.m. tonight and continue until 5 a.m. Tuesday morning. Late on Monday night, Mayor Bill de Blasio — after reports of looting in Manhattan at tonight’s protests — announced a curfew on Tuesday beginning at 8 p.m.

Cuomo also announced that there will be an increased police presence in the city with the number of NYPD officers on the streets tonight to double from 4,000 to 8,000.

“I stand behind the protestors and their message, but unfortunately there are people who are looking to distract and discredit this moment,” Cuomo said. “The violence and the looting has been bad for the city, the state, and this entire national movement, undermining and distracting from this righteous cause. While we encourage people to protest peacefully and make their voices heard, the safety of the general public is paramount and cannot be compromised.”

Mayor Bill de Blasio said that while demonstrations have been “generally peaceful,” the incidents of violence that have accompanied them are undermining “the message of the moment.”

“It is too important and the message must be heard. Tonight, to protect against violence and property damage, the Governor and I have decided to implement a citywide curfew,” said de Blasio. “The Police Commissioner and I have spoken at length about the incidents we’ve all seen in recent days where officers didn’t uphold the values of this city or the NYPD. We agree on the need for swift action.”

This is a developing story; check with amNY.com for further updates.