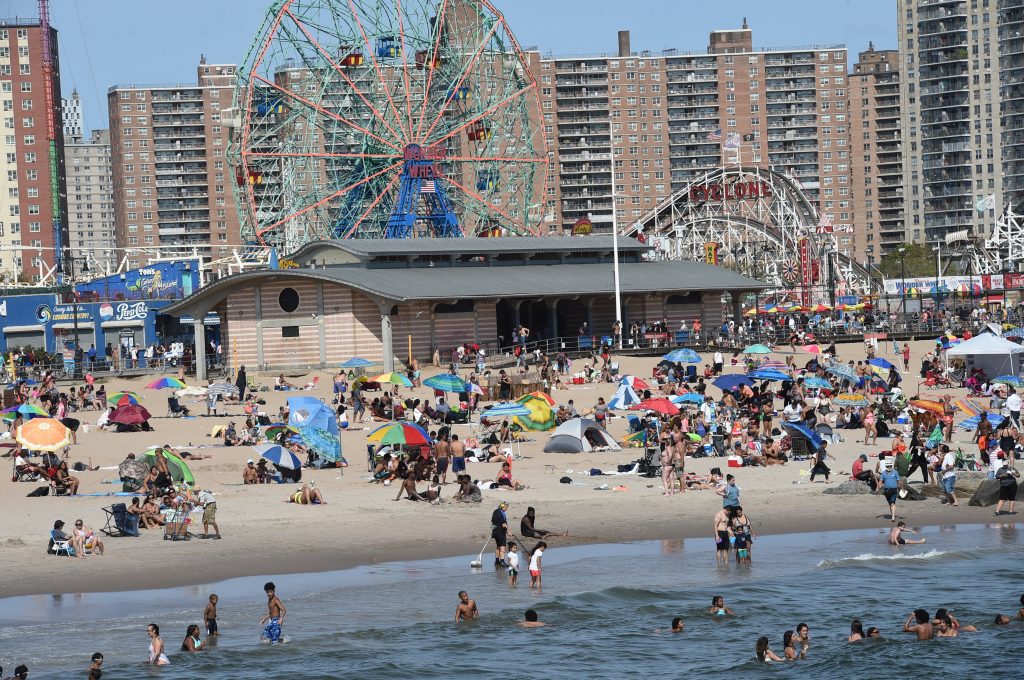 Labor Day weekend is the last days for the beaches to be open for swimming and many residents took advantage of the beach, sun and fun in Coney Island. Unfortunately, the fate of the amusements is in question after being closed an entire summer for Covid-19 pandemic. (Photo by Todd Maisel)

As the effort to bring a casino to the shores of Brooklyn’s Coney Island gained traction this week with three organizations joining Thor Equities’ bid to nab one of only three casino licenses Albany will issue for the downstate area, local electeds had mixed reactions to the proposal.

Sitt will be competing against what is shaping up to be a packed field of deep-pocketed developers, each looking to snatch up one of the three downstate licenses the state is set to issue sometime next year. They include New York Mets owner Steve Cohen and Related Companies CEO Stephen Ross – the developer of Hudson Yards.

The decision of who’ll ultimately get the licences is in the hands of the state Gaming Cimmssion.

The area’s incoming Assembly Member Alec Brook-Krasny – a Republican – told amNewYork Metro in an interview Wednesday that while he isn’t opposed to the idea of building a casino along the Coney Island Boardwalk, he feels that any proposal should include a list of benefits to the community that he’s identified.

“I’m a very realistic person, whether there is to be a casino or not is not going to be decided by the local assemblyman,” Brook-Krasny said. “Rather, this decision will come from the highest levels of the state. But what is important for the community, and me as a community representative, [is that] I will negotiate with all of these large entities for what the community needs.”

Brook-Krasny, who previously represented the area as a Democrat in the Assembly, will once again occupy his old seat come January, after he ousted Coney’s Island’s current representative in Albany’s lower chamber – Mathylde Frontus – in a nail-bitingly close race that concluded last week.

Brook-Krasny’s list of demands includes a new vocational school for Coney Island residents that would funnel students into union apprenticeship programs; a comprehensive cleanup of Coney Island Creek and the construction of a new pier and ferry stop on the peninsula; and repairs to the Coney Island Boardwalk.

He added that a casino would help transform Coney Island into a year-round, rather than just a summer, destination, creating much-needed jobs in the process.

“For years we’ve been talking about Coney Island as a year-round destination with a lot of jobs for the area residents, so I think [a] casino will help us in that direction,” he said. “So, in general, I would be for it if these huge entities will work with me and my community to develop what we need. And it’s in the mutual interest I believe but of course we’ll have to push for it.”

A city Economic Development Corporation plan to build a ferry landing at Coney Island creek was halted last week, months after construction on a new pier stopped due to a sand shift that posed safety and navigation issues.

Sitt said he believes building a casino in Coney Island would bring the area back to its glory days of the early 20th Century – according to a report from the Brooklyn Paper.

“New York will always be our home and we are thrilled to have the opportunity to reclaim Coney Island’s legacy and bring new economic possibilities to an iconic neighborhood,” he said in a statement.

The New York Times reported that Sitt’s proposal includes a roller coaster that would go beneath the Coney Island boardwalk, an indoor waterpark and several hotels and museums. The developers claim the project would create 2,500 temporary construction jobs and “thousands” of permanent positions. They also said they’ll employ Coney Island residents, work with local businesses and launch a hospitality and gaming focussed job training program.

Area City Council Member Ari Kagan (D), who’s been a vocal critic of bringing a casino to Coney Island in the past, reiterated his prior criticisms that people only have to look to Atlantic City, New Jersey, to understand casinos’ negative impact on heavily residential areas.

“The operator of the casino will become very very rich and successful,” Kagan said. “Everybody else will suffer, everybody else. Especially [the] area around the casino. Drugs, prostitution, crime, mental health issues, suicides, depression, family breakups, all kinds of robberies. It’s the last thing that Coney Island needs.”

What Coney Island does need, Kagan said, is a new ferry – like Brook-Krasny argued, another supermarket, another bank and better public transit. He also said that the casino likely wouldn’t hire locally, despite what the developers claim, and that it wouldn’t help other local businesses.

“Everything will be inside the casino,” Kagan said. “The whole point of the casino is nobody leaving casino, everybody’s in, nobody’s out. So, all of these ideas that it’ll be like grocery stores, restaurants, cafes and everything else around that everyone will visit, it does not fly.”

Outgoing state Senator Diane Savino (D Brooklyn, Staten Island) – who announced she’ll be joining Mayor Eric Adams’ administration earlier this week – said that while she’s agnostic on the prospect of a Coney Island casino, she thinks there’ll be a lot of community pushback.

“I don’t think you’re going to see a tremendous amount of support for a casino,” Savino said. “Because of the concerns about the strain on existing resources that are there. Whether it be the infrastructure, traffic problems, the ferry that was supposed to be coming. So, you’re probably gonna see a lot of pushback there.”