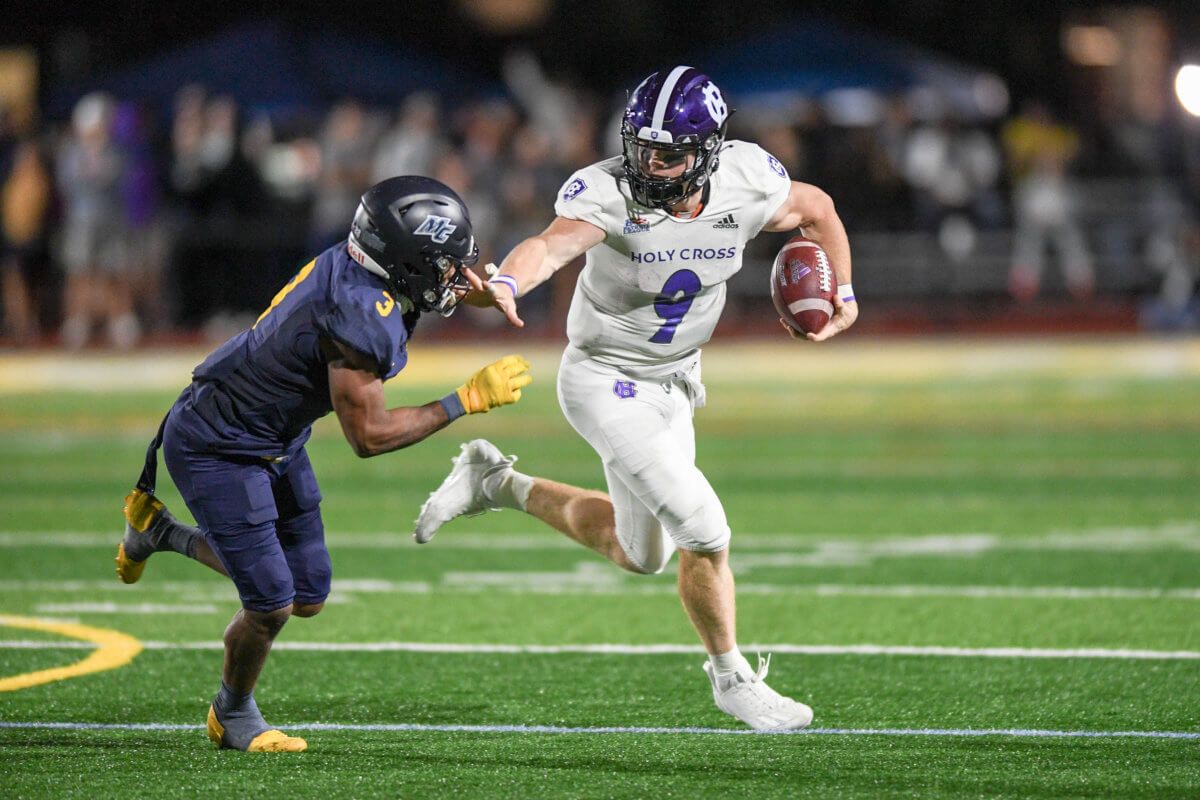 When Matthew Sluka was entering his junior year at Kellenberg Memorial High School he was fielding offers from some of the top collegiate lacrosse programs in the country. Just four years later, he’s a finalist for Football Championship Subdivision (FCS) Offensive Player of the Year, the engine behind Holy Cross’ 11-0 season, and has realistic dreams of playing in the NFL.

It’s been an impressive start to a career and one that could have easily never happened.

“Lacrosse was my main sport,” explained Sluka. “I had offers from twenty of the top 25 in the country at the time, so I was like ‘Why would I not just take these?'”

Lacrosse would have been the easier path for the Locust Valley, NY native. College coaches and scouts flocked to the sport in a way that was not the case when it came to Long Island football.

“Coaches told me, we can come watch one player who’s a potential division one player or we can go down to Florida and watch eight of them,” Sluka laughs. “It’s just not really worth their time and investment for one player, so there wasn’t really much I could do at that point.”

Yet, after leading Kellenberg to two straight undefeated seasons and two Catholic High School Football League AA titles, Sluka decided that football was the path for him. Temple had come to visit him during his junior year, but he knew he would have to work to try and find other offers.

“I was reaching out to a ton of coaches. I was doing the whole Twitter thing, making highlight tapes on Huddle. But it was a tough spot to be in because a lot of coaches won’t answer you on Twitter, so you need somebody else to put their foot in the door for you, and I didn’t really have that available for me when I was younger.”

In order to improve his chances of latching on with a good college team, the 6’3″ quarterback spent one postgraduate season at the Peddie School in Hightstown, N.J. where he led them to a perfect 8-0 record during the 2019 season, while winning the Mid-Atlantic Prep League title.

That marked three straight years of leading an undefeated team, and Sluka was able to commit to Holy Cross just in time for a COVID-shortened 2020 season. With the fall season canceled that year, the Crusaders had just three weeks before their first spring game, and Sluka was told not to expect to play much.

However, just two games into his first year, he was thrust into action when the team was looking to spark a dormant offense.

“They were just like, ‘Tell us the plays you know and just do what you do,'” he recalls. “On the first play I scored, and then I had another carry after that, and I scored again.”

Sluka would go on to start the Patriot League Championship Game against Bucknell and recorded three total touchdowns in a winning effort.

From that moment on, the team was his.

In his first full season as a starter, he completed 56% of his passes for 1,512 yards passing and 11 touchdowns, while adding 868 yards rushing and 14 touchdowns on the ground, but he still had a lot to learn.

“One of the biggest problems I had coming in was that, on Long Island, it’s kind of your best player goes up against their best player. It’s a one-on-one matchup in a sense. Coming to college, you really need to learn the coverages and the playbook and dive into that.”

However, his progress was hampered by COVID schedule changes. “Having the shortened camp in the spring and then going right into the fall season, I never had time to just sit down and learn about football without having the pressure of a gameplan.”

The offseason work he was finally able to put in has paid off as Sluka finished the regular season with a 60% completion rate, 2,301 yards passing and 25 touchdowns, while adding 918 yards rushing and another eight touchdowns. He even orchestrated one of the best finishes in college football this year when he completed a 45-yard hail mary on the final play of the game to beat Buffalo, who competes in an NCAA division above Holy Cross.

The quarterback was 13-for-21 for 238 yards and three touchdowns in that game and also had 146 yards on the ground. It was a huge moment not only for him but for his team. “That was one of the points where we saw that we had the hearts and the belief that we need to have to win any game.”

The Buffalo game brought Sluka more national attention, and his play throughout the season continued to draw praise, culminating just last week in being named as a finalist for the Walter Payton Award, given to the top offensive player in the FCS.

“I focus on the wins, but just to be recognized as one of the top offensive players in the year is a great accomplishment,” he admits. “It would be great to win, I would love it, but it’s not my main focus.”

His main focus right now is on Holy Cross’ first playoff game, which will be December 3rd against the winner of the Fordham and New Hampshire first-round game.

Holy Cross played Fordham earlier in the year in an epic battle that saw Holy Cross pull out a victory 53-52 after a wild two-point conversion in overtime. However, it doesn’t matter to Sluka who they play in their first playoff game. Holy Cross’ chances at a national championship will depend only on what they can control.

“I feel like every year we have taken that one next step,” he explained. “It just comes down to understanding that we’re in this. We can really do this. Every week we just focus on going 1-0 and being the best we can be. We have no control over who we play, so we’re just out there fixing the things that we can work on.”

A national title would be quite the way to cap off a magical season, but it will hardly be the end for the Long Island native. In fact, this season has likely drastically changed Sluka’s future prospects.

While he still has his senior year remaining, he also has the potential to take an additional COVID year as well, so he has the flexibility to graduate after next year and see what the NFL has to say about his chances before deciding if he wants to leave, come back to Holy Cross, or even explore transfer possibilities to play one season at a big-time program.

“I’m in a really good situation, I think, being able to manage all avenues pretty openly.”

On the other side of all of those avenues, the NFL dream shimmers in the distance.

“Thinking about having a shot at the NFL, I mean, that’s the best of the best,” he smiles. “Having guys coming back from the NFL and telling me that I’m gonna have my chance. It’s unbelievable. You get chills from it, but you just gotta keep going.”

It’s quite a four-year arc for a player who was all set to take a lacrosse scholarship, but Sluka is hopeful that his success, along with the success of other Long Island natives like Syracuse quarterback Dan Villari and former Ohio State tight end and current New York Jet Jeremy Ruckert can continue to improve the prospects of other Long Island football players.

“I want Long Island to become a place for football,” Skula stated. “Just being able to use my voice as somebody who’s been able to do it is a huge stepping stone. I didn’t think this was a reality when I was young. It was a dream, but now dreams are coming true based on my hard work.”

Perhaps that hard work can also open up the doors for more to follow behind him.