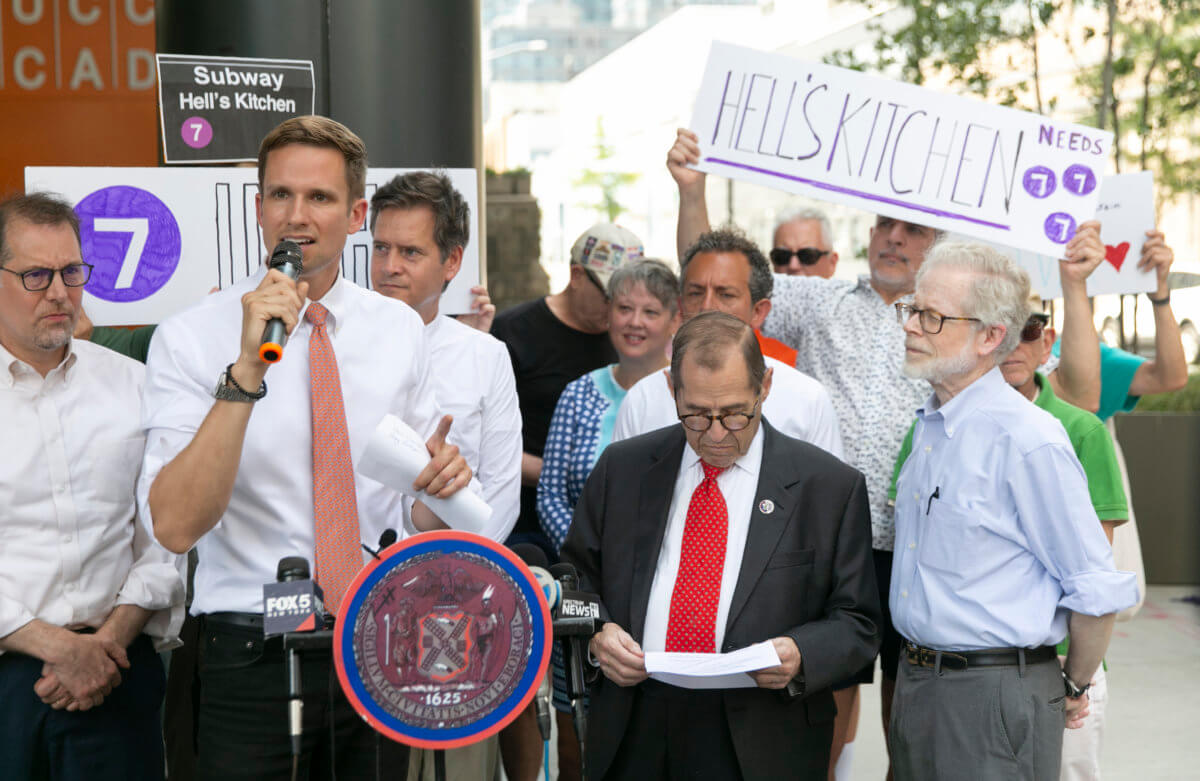 Manhattan politicians called on the MTA to build the long-promised 10th Avenue station on the subway’s No. 7 train in Hell’s Kitchen Tuesday.

A stop at 10th Avenue and 41st Street was originally supposed open on the Flushing Line as part of two new stations along its westward extension to the Hudson Yards campus. But Metropolitan Transportation Authority officials and the city dropped the proposed station 14 years ago and ended up just building one at 34th Street and 11th Avenue.

“That was a huge, huge mistake and a huge missed opportunity,” said local Council Member Erik Bottcher at an Aug. 10 press conference. “A lot of people live even further west than we are now. It is a very very long walk to the subway.”

The 10th Avenue station was scrapped under then-Mayor Michael Bloomberg in 2008 due to a lack of funding and because City Hall at the time thought it was not crucial for the area, but the proposal gained new steam in recent weeks after the MTA listed the it among nearly two dozen projects transit officials will consider for the state Authority’s next five-year capital plan.

The pols said the stop was more needed than ever as Hell’s Kitchen’s population and businesses have grown in the nearly decade-and-a-half since government abandoned the transit upgrade.

“The reason now to build the station is even greater than the time it was promised,” said State Sen. Brad Hoylman. “Let’s take advantage of this infrastructure opportunity that sits right below us today to make transit a reality here on 10th Avenue.”

The MTA dug the new subway tunnels from the No. 7’s old terminus at Times Square to the far West Side, but the agency fell $450 million short in funding they needed to carve out a station at 10th Avenue and instead decided to just build the Hudson Yards stop at the new end of the line.

Officials with the Bloomberg administration said back then that the 10th Avenue stop was not crucial to the project since its surrounding area was already well developed.

“A 10 Avenue station would be nice, but it’s really a straight transportation project versus an economic development catalyst,” said one city rep at the time.

“It was a bait-and-switch. We got one station but we didn’t get the second that we were promised,” Hoylman said Tuesday.

The MTA’s so-called 20-Year Needs Assessment lists the 10th Avenue station as one of many projects they may add to the next five year capital plan for 2025.

It will have to compete against a slate of other expansions and upgrades to the MTA’s aging mass transit system, such as an extension of the W line to Red Hook, Brooklyn, Governor Kathy Hochul’s favored Interborough Express from Brooklyn to Queens, and electrifying sections of the MTA’s commuter railroads currently running on diesel fuel.

“While more than 80% of our Capital Program is dedicated to state of good repair and core infrastructure needs, expansion projects can help meet new mobility needs and address transportation inequities,” said MTA spokesperson Sean Butler in a statement. “The MTA will be using metrics to compare a projects’ opportunities on an apples-to-apples basis that prioritizes smart planning and equity.”