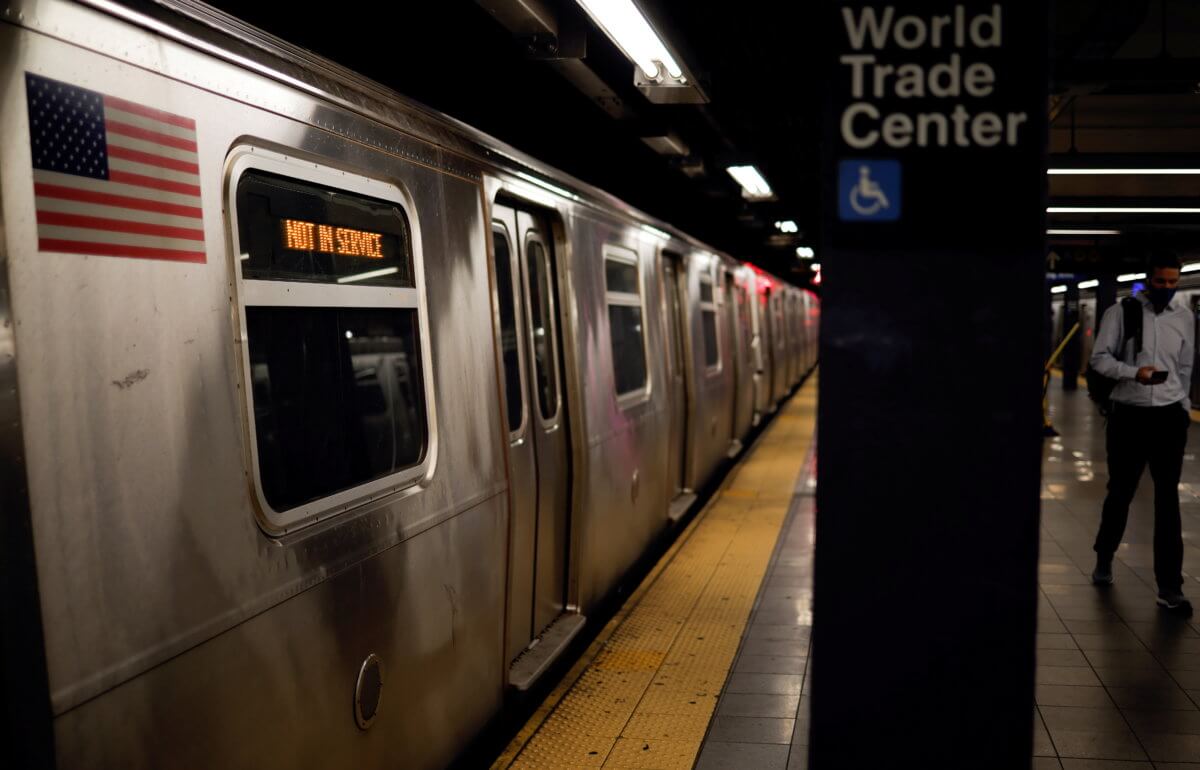 The MTA shut down subway service on all lines Wednesday night and had to evacuate riders from 17 stranded trains as the remnants of Hurricane Ida soaked New York City.

“This has been a historic and challenging night for the region, our customers and transit workers,” said Metropolitan Transportation Authority chief Janno Lieber in a statement early Thursday morning. “Torrential rains caused massive amounts of water to enter subways and flood roads, creating severe disruptions to service.”

Transit officials working with police and firefighters rescued about 1,000 straphangers from trains stuck in the system, according to MTA officials, following the record-shattering downpour described by Governor Kathy Hochul as “Niagara Falls-level of water.”

Unlike the shutdown caused by a power dip on Sunday night, none of the stranded riders self-evacuated from the stuck trains to MTA’s knowledge, according to agency spokesman Tim Minton.

Some 46 locations on the subway were flooded and 65 buses were stuck, but luckily there were no reports of injuries on the transit system.

MTA started rerouting trains after water overflowing on city streets burst into the stations and flooded the tracks, such as 28th Street in Manhattan, where videos on social media showed water surging out from the platform.

It's almost comical to say it at this point, but doing nothing is so obviously not an option. Inaction will cost so much more than passing a Green New Deal, creating a climate-resilient and 21st century infrastructure, and ending our dependence on fossil fuels. pic.twitter.com/pfosPKJr6C

After 10 p.m., transit officials began suspending trains until the entire system was out of service, a necessary move to keep riders safe, according Hochul.

“What we experienced yesterday was literally something that experts say would not happen for 500-1,000 years,” the governor told WNYC radio Thursday morning. “Clearly we had to shut down, we could not jeopardize people’s lives and leave the subway system open.”

The subway is off. pic.twitter.com/Hk8L6DMxrc

The floods marked the second major subway shutdown in Governor Hochul’s nine days in the Empire State’s highest office she pledged to investigate whether more could have been done to prevent Wednesday’s mess.

“Did we have enough warning, did we let people know, should we shut down subways earlier, was there a breakdown in communication with the weather systems, were we prepared enough,” she said at an afternoon press conference on Long Island. “I am going to intensely ask those questions, get the answers, and when I get them, I will share them with the public.”

The 7 line, which runs on mostly elevated tracks, and some of the shuttles were first to be back up, but MTA Chief Customer Officer Sarah Meyer advised New Yorkers not to travel.

“The 7 line is operational and some lines are still running limited shuttles, but please don’t travel. Your safety is our absolute priority,” Meyer wrote on Twitter at 10:40 p.m. Wednesday night.

The 7 line is operational and some lines are still running limited shuttles, but please don't travel. Your safety is our absolute priority.

One rider captured a bus driver pushing through Queens Boulevard flooded 3-4 feet, as water penetrated into the shuttle and straphangers had to stand on the seats to stay dry.

Hero bus driver managed to get us safely through the 3-4 feet of rain coursing down the boulevard, but only seemed to be getting worse.

Finally made it through to higher ground and a fellow passenger exclaims ‘oh no I missed my stop..’ pic.twitter.com/ofrVQhGnhK

Unlike the subways, buses were able to operate at 90% throughout the storm.

MTA deployed thousands of employees with to pump water out of flooded subway tunnels and remove debris such as downed trees from tracks.

There are delays on the 7, B, D, G, J, L, Q, as well as the Franklin Avenue and Rockaway Park shuttles, and 1 trains are running express southbound between Penn Station and Chambers Street, according to MTA.

Water got into an MTA substation at 179th Street in Queens, which has made it harder for transit workers to bring power back to the Queens Boulevard Line, which carries E, F, M, and R trains, according to Minton.

Commuter rails have also suffered major cancellations, with the Metro-North Railroad fully suspended due to power issues and washouts, with “considerable” disruptions on the Port Washington branch due to flooding, according to officials.

The Long Island Rail Road has several delays or suspensions, and some service was rerouted to Penn Station as crews work to address flooding and other storm damages at Atlantic Terminal, according to MTA.

Some limited service was back on Port Washington branch just before 4 p.m. Thursday, according to MTA.

Lieber said his focus will be to work with the city’s Department of Environmental Protection to ensure the sewers and drainage system can handle the new record levels of rain, rather than be overwhelmed and spill over into the transit system.

“We’ve done a lot for coastal resiliency, how are going to start to deal with this flash flooding problem, this problem that has emerged that in era of climate change,” said Lieber.

But a timely report by the MTA’s Inspector General revealed the agency must also get its act together to clear its own clogged drains inside stations, which would take a staggering 15 years to degunk at the agency’s current rate, the Daily News reported.

Transit advocates called on state and federal leaders to act fast in the face of the more severe weather events crippling transit infrastructure as a result of climate change.

“The subway is both a victim of and solution to extreme weather made worse by climate change. Millions of New York riders and our state and federal climate goals all depend on frequent, reliable, and resilient public transit service,” said Danny Pearlstein of Riders Alliance. “President Biden, Senator Schumer, and Governor Hochul all have critical roles to play in ensuring that the MTA implements congestion pricing, makes essential capital upgrades, and stops steep fare hikes and deep service cuts as pandemic aid runs out.”

For the most up to date info on train service, check mta.info.