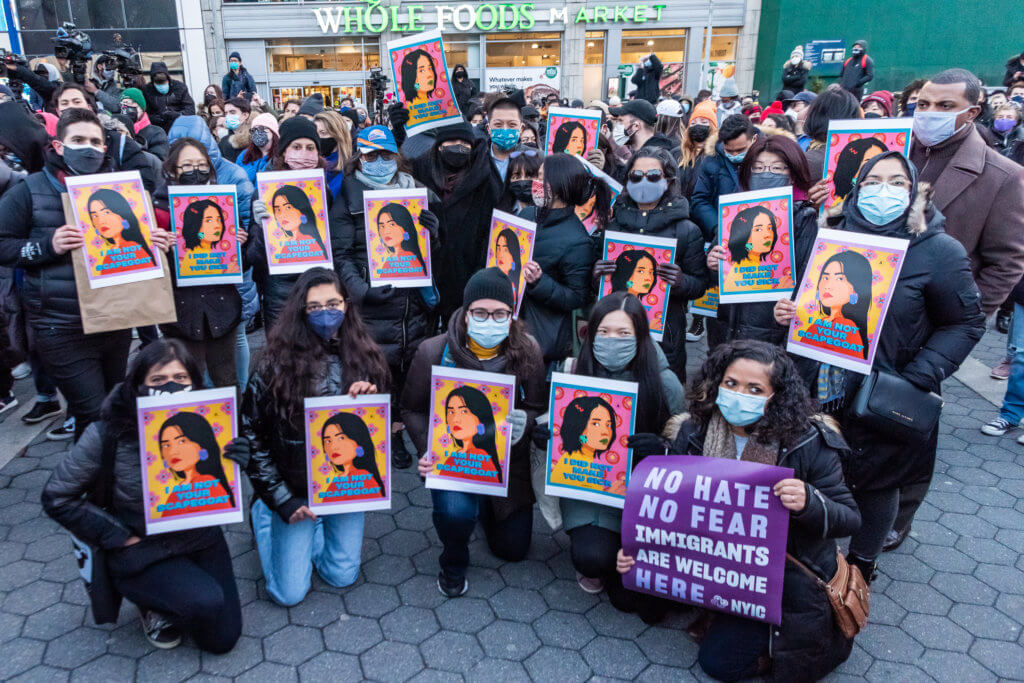 New Yorkers attend a peace vigil for victims of Asian Hate in Union Square on March 19, 2021.
Photo by Gabriele Holtermann

A few hundred New Yorkers gathered in Union Square on Friday night for a peace vigil to remember the lives of the eight victims who were shot and killed — six of whom were Asian women — in Atlanta on March 16.

A slew of elected officials and community organizers spoke to the crowd at the vigil organized by the Asian American Federation. Their comments, at times, drew cheers when they called on authorities to label the heinous murders a hate crime.

Hate crimes against Asian Americans have skyrocketed since the COVID-19 pandemic began last March. Stop AAPI Hate reports that it has received almost 3,800 reports of hate incidents from March 19, 2020, to Feb. 28, 2021, though it is assumed that many more bias attacks go unreported.

Senator Chuck Schumer talked about the heartache the assaults on the Asian American community have caused over the last year and called out former President Trump for his racist rhetoric during his time in office, which he said has contributed to the volatile situation.

However, Schumer seemed confident that the new Biden administration would win the fight against bigotry and violence with the help of the American people.

“We will not let bigotry prevail against Asian Americans or any American. We know that violence and bigotry against one is violence and bigotry against all. We stand firm. We speak to the better angels of America,” the Senate majority leader declared. “We’ll fight violence with every atom in our bones, and we, not the bigots, not those who are violent,  we will win this fight and prevail.”

Poet Cindy Tran expressed her countless confrontations with bigotry and sexism in written words. She spoke of the man, who wanted to know her “real” name when he looked at her name tag; the man who turned to her on a bus and said, “I fought in Nam. You’re here because of me;” the friend who asked for a sexual favor because he claimed he was dying of brain cancer, and when she denied it, asked her if she had any Asian friends who could help him.

She recalled how she was bumped into or shoved by men on many occasions because of her Asian ancestry. But Tran also feels empowered by her friends who stand up for themselves.

“Every time a friend stands up for herself, I feel her power. It brings me back to life,” she concluded.

Jo-Ann Yoo, executive director at the Asian American Federation, was visibly moved and close to tears when she got to the podium and began her speech. She reminded everyone that six of the eight victims of Tuesday’s mass shooting looked like her, looked like so many who had assembled in Union Square.  She demanded that the Asian American community deserves better.

“Tonight, we process our anger and sadness together. As a family, we resolve to work together to make sure that our demands are heard and our community, invisible, no more,” Yoo said.

While the crowd chanted, “no more hate,” Yoo encouraged everyone to make their voice heard.

Queens state Senator John Liu shared that he had been called many derogatory names growing up in New York City, and now, in his 50s, he had thought that those days were behind him. Exasperated, he talked about vandalized Asian American businesses, restaurants being boycotted, the violent encounters, and a seemingly never-ending spate of hate against Asian-Americans.

He demanded justice for the victims by labeling the murders a hate crime because the perpetrator thought out only Asian businesses.

Liu referred to a newly released video that shows the Atlanta shooting suspect, who is white, calmly walking into one of the stores with a gun he had purchased the same day after passing an instant background check.

“He got out of this car, calmly, as shown in the videos. Had his gun and went into an Asian business looking to kill Asians. And then he did it again, drove to another Asian business to kill more Asians, and then get a third Asian business to kill Asian Americans. And there’s a question as to whether this is a hate crime?” Liu said. “That is absolutely outrageous. This is the kind of thing that continues, the violence and attacks against Asian Americans all across this country.”

Public Advocate Jumaane Williams encouraged the crowd to turn to their neighbors, touch elbows, and tell them that they are not alone.  He expressed that Tuesday’s abhorrent events were the inevitable conclusion of white supremacy and racism, incited by former President Trump.

Williams also had a message for law enforcement from the Black community.

“We are asking you, please, to treat unarmed black people the way you treat armed white people who have murdered people and who simply have had a bad day. That’s all we ask. Just give us that!” he added.

New York City mayoral candidate Andrew Yang didn’t speak at the event but gave an impromptu press conference when he was leaving.

The former Democratic candidate for president spent time in Georgia last year to get out the vote. He reflected on the wonderful people he had met there along the way, and who only want to provide a better life for their families.

“I’m thinking about these six women who lost their lives. And one of them I was reading about is a mother of two, and her boys will never see their mother again. It’s sickening, it’s tragic, it’s senseless. These people should still be alive,” Yang said.

He also said that he supports fully funding the Asian Hate Crime Task Force, which currently is a volunteer effort.

“The assaults in New York City are up 900%. And that is not the kind of violence that you frankly assigned volunteers to,” he said and also urged authorities to identify the incidents as what they are, which are hate crimes.

“I’ve personally spoken to Asian American victims of hate crimes here in New York City who have never recorded them,” Yang explained and added,  “We have to build bonds of trust and communication with the Asian American community here in New York City. So they actually feel like if they reach out, they’ll know that they’ll get help, they know that someone will actually understand and be trying to support them.”