The dollar slid and global equity markets jumped on Tuesday on bets of increased stimulus if Joe Biden wins the U.S. presidential election against President Donald Trump, but gold prices gained on the prospect of contested voting results.

Stocks climbed in Asia after the Reserve Bank of Australia cut interest rates to near zero and boosted its bond-buying program, a precursor to expectations the Bank of England on Thursday will also ramp up its bond purchases.

The dollar slid on the notion a Biden victory would weaken the greenback as the former Democratic vice president is expected to spend big on stimulus and take a more market-friendly approach to trade, boosting other currencies at the dollar’s expense.

Biden has held a strong lead in national polls, but Republican Trump is close enough in swing states possibly to gain the 270 Electoral College votes needed to hold onto the presidency.

Investors hedged their bets, seeking the safety of safe-haven gold, which also can rally due to a weaker dollar, while driving up stocks more than 2% on Wall Street and in Europe on hopes for more stimulus to combat the coronavirus pandemic.

“The sole driver behind gold prices is the high likelihood that there is going to be chaos surrounding the U.S. elections, from the predictions of not having a president by tonight,” said Jeffrey Sica, founder of Circle Squared Alternative Investments.

“The markets in the last 48 hours have become a bit more convinced of a Biden victory without the messy risk of weeks of uncertainty and turmoil,” said Derek Halpenny, head of research at MUFG.

In Europe, growth-sensitive cyclical sectors such as oil and gas, mining and banks once again led therally.

Markets noted an update from Britain and the European Union on their trade talks that indicated there is still no agreement on longstanding sticking points like fishing rights.

Analysts said that while the mood was more upbeat on Tuesday, it remained weak at heart as European countries introduced tougher lockdowns to fight a pandemic that was set to hit the economy further.

Investors await the outcomes of Federal Reserve and Bank of England meetings this week, which are also expected to bring more support.

“The problem with markets is that they are very binary. One day everything is hunky dory and the next day it’s the depths of despair, and so you have to tread that tightrope between the two that creates volatility,” said Michael Hewson, chief market analyst at CMC Markets.

MSCI’s broadest index of Asia-Pacific shares outside Japan added 1.4% overnight. The gauge is less than 1% shy of a two-and-a-half-year high struck in mid-October and up over 5% this year, driven by a 37% rebound from China’s markets since March.

Currency markets tilted toward a victory for Biden. 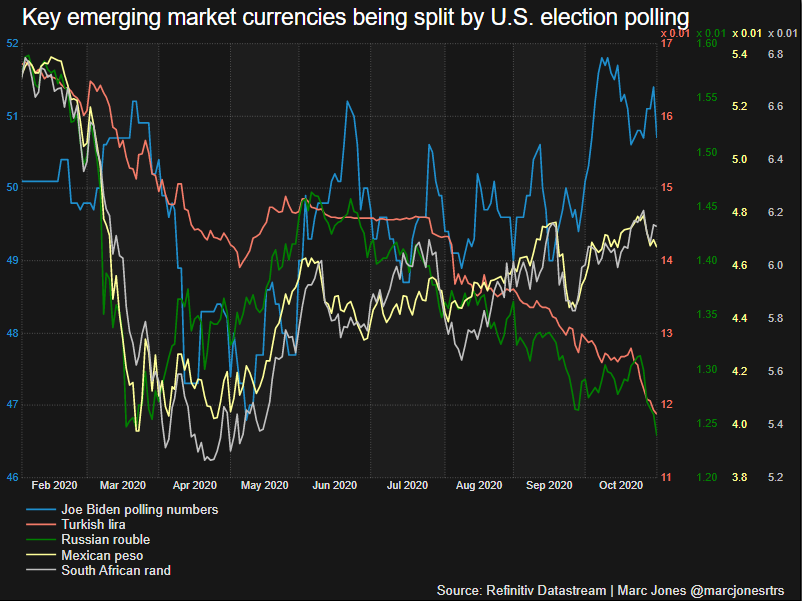 Oil prices gained about 2% as financial markets staged a broad recovery despite growing concerns over surging coronavirus cases around the world. 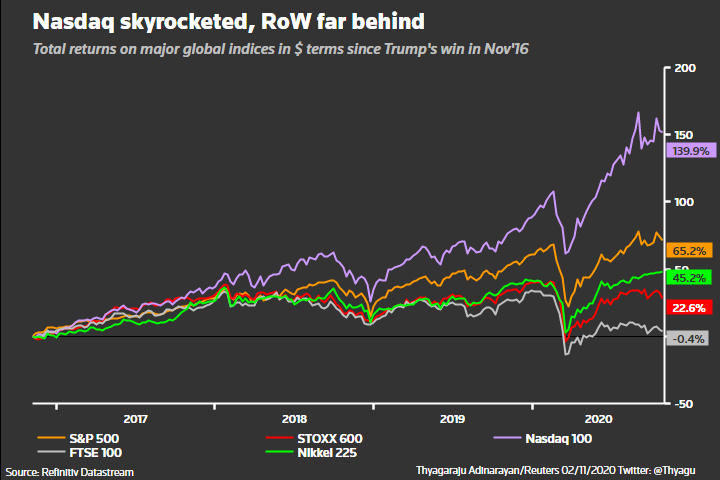