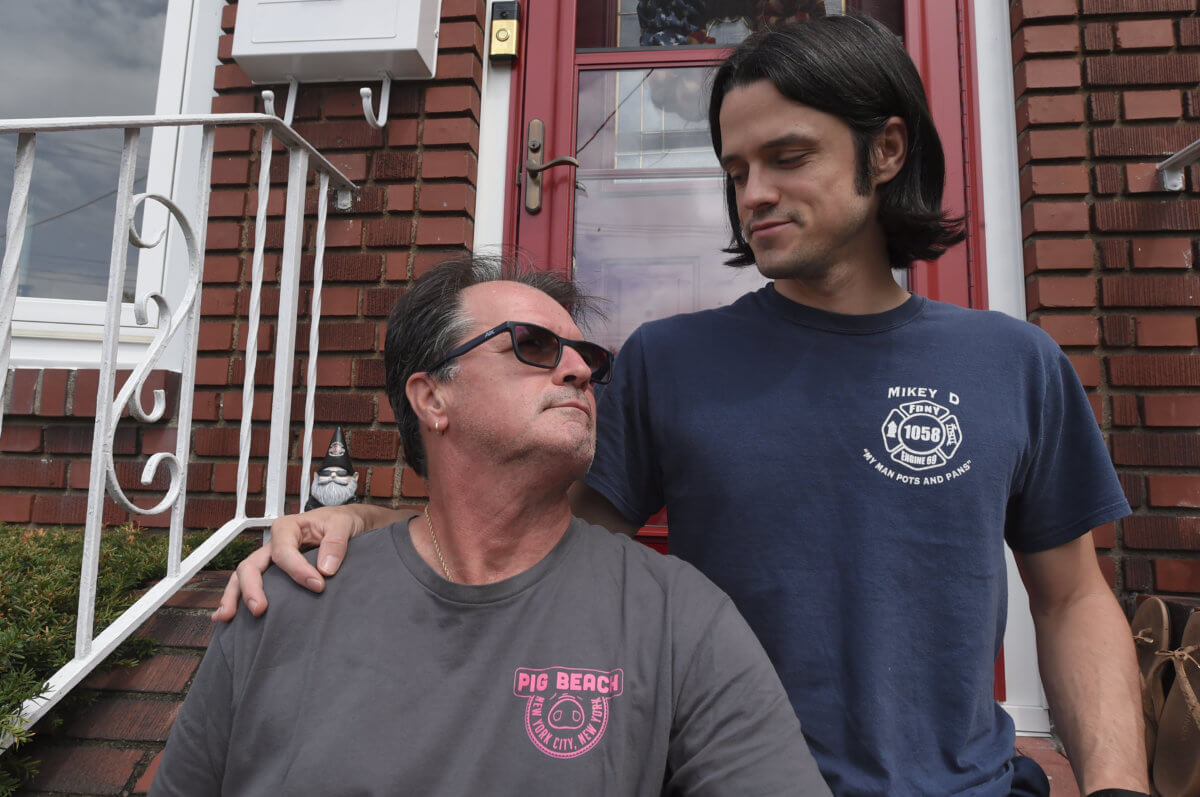 The stories about 9/11 and the loss on that fateful day at the World Trade Center are numerous including Neil Malone, who despite serious injuries on the job a month earlier, he responded to the disaster. He is joined by his son Andrew, also a firefighter during the last five years in Manhattan. (Photo by Todd Maisel)

On Aug. 5, 2001, Firefighter Neil Malone of Engine 239 in Park Slope, was accidentally electrocuted from the third rail in a subway tunnel that was supposed to be “turned off” where he and his fellow firefighters were rescuing a man from the tracks.

Despite being on medical leave and suffering significant residual effects of that electrocution and burns that kept him in the Cornell Burn Center for 14 days, Malone was not staying home when his brothers were in need.

Without hesitation, he and other fellow firefighters jumped into a private vehicle and raced to the World Trade Center on 9/11.

He is now preparing to retire from the department after 38 years (including 20 months with EMS as a paramedic), but not because he wants to leave the job at age 63 (mandatory retirement age is 65). It’s because he fights the effects of cancer caused by World Trade Center toxic dust exposure — an affliction that has killed hundreds of first responders who took part in search and recovery efforts at Ground Zero.

Despite the cancer, he says, “I’m still alive,” and he believes his survival has a purpose.

Neither Malone nor any of the other first responders to rush to the Twin Towers that morning knew how it would end, though they realized the tremendous danger they faced. They didn’t know that 343 of his brothers would ultimately be killed after two airliners piloted by terrorists crashed the planes into the Twin Towers, sparking massive fires that would cause both skyscrapers to collapse.

That fateful morning, Malone didn’t get to sleep in his Flatlands, Brooklyn home till 5 a.m. due to the continued pain and discomfort from the injuries from the month before.

“My brother Brian, a lieutenant in Ladder 108 in Brooklyn called me. I’d only been asleep for three hours, but I turned on CBS and saw they were transmitting from the Empire State Building and you could see the size of the impact and I knew it was more than a small plane,” Malone recalled. “When I got to the firehouse, there were two of us there, we began debating whether to respond to the Battery Tunnel. We contacted Engine 230 and we got the order to stay there. But then, we decided we gotta go. Everybody there disregarded the order and we all headed to the tunnel.”

Malone, with 18 years on the job at that time, arrived at the tunnel where he encountered a Triborough Bridge and Tunnel sergeant that he trained as an EMT. There was brief disagreement as to whether to let the firefighters through, but then they believed his paramedic skills would be essential, but they were re-routed to the Brooklyn Bridge.

Upon arrival at the disaster, both towers had already collapsed – surviving rescuers and many civilians were already searching for victims trapped in the monstrous piles of girders and concrete. It’s only a short time later that they found acting Chief Alfredo Fuentes still inside a crushed SUV — a collapsed lung and a horrific gash in his face to his head among other injuries.

“He was begging for his life, but for the grace of God, we found him,” Malone said. “We extricated him on a stokes basket and took him to the waterfront to a fire boat. I felt terrible that we should abandon him, but there were other firefighters with him so we went back to the pile to see if we could find other survivors.”

While Chief Fuentes survived his injuries, Malone and other rescuers made another grim discovery.

“I got back there 6 a.m. the following morning and we continued the search. We later found 36 bodies in one area, 20 firefighters and 16 civilians. One firefighter was decapitated, his head still in his helmet – Fuentes was the only one we found alive,” Malone sighed.

At one moment on the pile, where there was no phone service, he somehow received a call from his daughter Dana calling from high school that day.

“She starts crying, knowing I was supposed to be home on medical leave – but I said every viable body was needed to search for people. If anything happens, let everyone know I love them I told her – God must’ve intervened to get that call,” he said.

Other memories of the search was the dust and fumes emanating from below the pile.

“The smell of decomposing bodies became worse every day,” Malone recalled. “We only had the N-95 masks till better respirators were available. I also remember the smell of molten steel, you can’t get that out of your nostrils. [Then-EPA Administrator] Christie Whitman said it was safe, but people are dying to this day.”

And then there were low flying planes, which Malone recounted, “we all thought more attacks were coming until we could see they were military jets.”

Malone doesn’t even know how many days he was on the pile, and he soldiered on despite the continued discomfort and trauma of his previous injury.

“I personally knew about 40 guys that were lost, some were out of Brooklyn like (firefighter) Michael Bocchino, of Kensington, Brooklyn, I used to be 239, he was aide at the 48th battalion – he and I were very close, a real friend,” he said.

Malone not only wants to make sure people never forget what happened on 9/11, but he says his life has new meaning and as a Catholic, he said he asks God for guidance.

That guidance was to be a firefighter for as long as he was able. And because of this guidance, a man and a child are alive today.

A year after his third rail electrocution, the FDNY allowed Malone to resume full-duty with his unit. He would go on to do what a firefighter does best — saving the lives of strangers while risking their own.

On June 28, 2006, Malone and his company rescued one of two men trapped in a trench collapse in at a Gowanus construction site. He suffered heat exhaustion after the rescue. Malone received the Thomas Dougherty Medal for the save.

On Nov. 26, 2011, Malone and his company rescued 8-month-old Josiah Alexis from a burning President Street apartment in Park Slope. Malone performed mouth to mouth resuscitation on the boy, resulting in the unconscious child later making a full recovery.

Today, Malone is weak from the 2020 surgery on his prostate; he had a 13.5 PSA test that caused doctors at Sloan Kettering to rush him to surgery. “They got it all,” he said.

But they also got his energy, and recovery has been slow. He’s currently on light-duty and officially retires in November.

Despite his brush with death from cancer, he has no reservations about anything he’s done as a firefighter. He’s also grateful for his three children, Andrew, Dana and Elizabeth. His son Andrew, 31, is now a firefighter in Manhattan’s Engine 91 for the past five years.

“I don’t think 9/11 had anything to do with me becoming a firefighter,” Andrew said. “Our teacher told us when it happened that we are being attacked and it really scared us – we were all terrified and had cell phones and started calling home.”

“I have no reservations about him being a firefighter – it’s his life, not mine so I don’t worry,” Malone said. “I’m a Catholic and I have faith. Every time do something, ask God for his guidance.”

As for what he might’ve done differently, he sighed, “I would have done everything the same way as 20 yrs ago, truth be said. But yes, there is a reason I was spared.”