Former firefighter recalls the ‘Miracle of Stairwell B’ 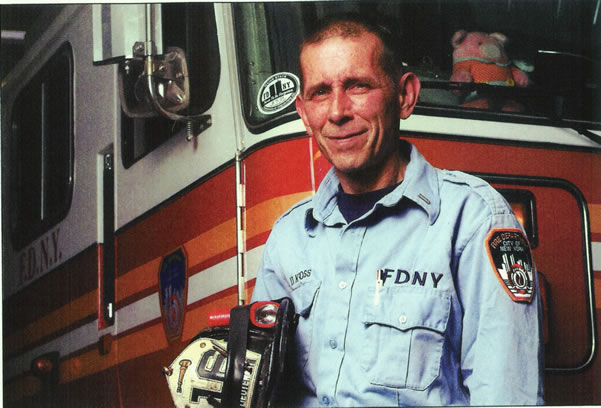 In his studio apartment not far from Ground Zero, retired Firefighter Mickey Kross recently demonstrated what he did the morning the North Tower collapsed on Sept. 11, 2001, at 10:28 a.m.

Kross, 64, then a lieutenant assigned to a firehouse on E. 29th St., was part of a unit on the 24th floor that had been ordered by his commander to quickly vacate the building, following news of the collapse of the South Tower at 9:58 a.m.

Stopping to assist an injured woman on the 23rd floor, Kross and his men had carried her to the fourth floor of Stairwell B when the walls started violently shaking.

What followed over the next 10 seconds, Kross recalled, was a deafening roar, as the 110-story office tower rained 250,000 tons of steel and slabs of concrete.

“It was like a 100-mile-per-hour hurricane,” Kross said, as he pulled his knees tight up under his chin in a fetal position, as he did that morning in a corner of Stairwell B, in anticipation for what must have seemed like certain death.

He calls those 10 terrifying seconds as the North Tower came down “DABDA,” from an acronym coined by psychologist Elizabeth Kubler-Ross, referring to the five stages of grief she theorized terminally ill patients experience.

“That means denial, anger, bargaining, depression and acceptance,” Kross said. “It doesn’t make a difference if you are going to die in a year from now or in a minute, the process is the same.”

However, what followed the thunderous roar of the plummeting skyscraper was not death, but what Kross described as a silence “quite unlike I have ever heard.”

Still for the next 10 minutes Kross, entombed in debris, was sure that he had become one of the hundreds of firefighters killed that day.

“I thought I might be dead. I didn’t feel anything. Maybe I am dead. I have never been dead before so I didn’t know,” he said.

After 10 minutes of experiencing “no sensation,” Kross came through. Managing to push the rubble off him, he started yelling out for the other members of his unit and was surprised to hear screams from other firefighters, an additional 11 in all.

Several employees from offices in the building had also survived, including the woman he helped down, Josephine Harris, who became known as the “Angel of Stairwell B.”

Although trapped for three hours and in virtual darkness, a sudden shift in the wind inside the smoldering crater revealed a shaft of light coming through directly overhead.

Using twisted steel and burning debris for support, Kross and his men climbed to the gap and from there made their way to a Fire Department command post, where he discovered that he had been listed as missing.

With only a bloody nose from the attack, but covered in debris, Kross shook off requests to go to a hospital and instead went looking for his girlfriend, Christine Gonda, to tell her that he was alive.

Gonda, who lived a couple of blocks from the site, had called Kross at his engine house at 8:48 a.m., in a hysterical state.

“We both heard the plane hit the building while talking on the phone. I knew that a lot of people were going to die that day,” a tearful Gonda recalled, adding that she will never forget the “horror on the faces of mothers” who had been playing with their children below as the plane flew over.

When Kross got to her building in the afternoon, he found that Gonda wasn’t there. Instead he left her a note at the door, which is now kept in a museum: “Christina, I’m OK. Talk to you later. Luv, Mickey. This 3 p.m.,” the note read. They reunited at his firehouse that night.

After leaving Gonda’s apartment building, Kross returned to the World Trade Center site to assist in recovery efforts, finding the body of a fallen police officer nearby. He would return to Ground Zero to search for bodies over the next nine months.

At a reception recently on behalf of international firefighters at Seven World Trade Center, Fire Department Commissioner Salvatore Cassano commended the efforts of Kross and others on that day.

“From being at the World Trade Center that day, there was never any doubt about the bravery and commitment and dedication of the F.D.N.Y. It was unbelievable,” Cassano said.

“I gave orders to many who wouldn’t be coming back. They knew this would be the toughest fight they would have to face, and they just performed their duties without questioning it one bit,” he said.

These days the terrorists and their “sadistic ideology” fill the thoughts and the library of Mickey Kross.

Kross also maintains contact with many of New York’s Bravest who survived the terrorist attacks. One of them is retired Firefighter Joe Torrillo, who stills suffers the effects of horrific brain injuries when he was hit by falling steel from the South Tower.

During our interview, Torrillo called and made a remark about the attacks that Kross said largely sums up that day for him.