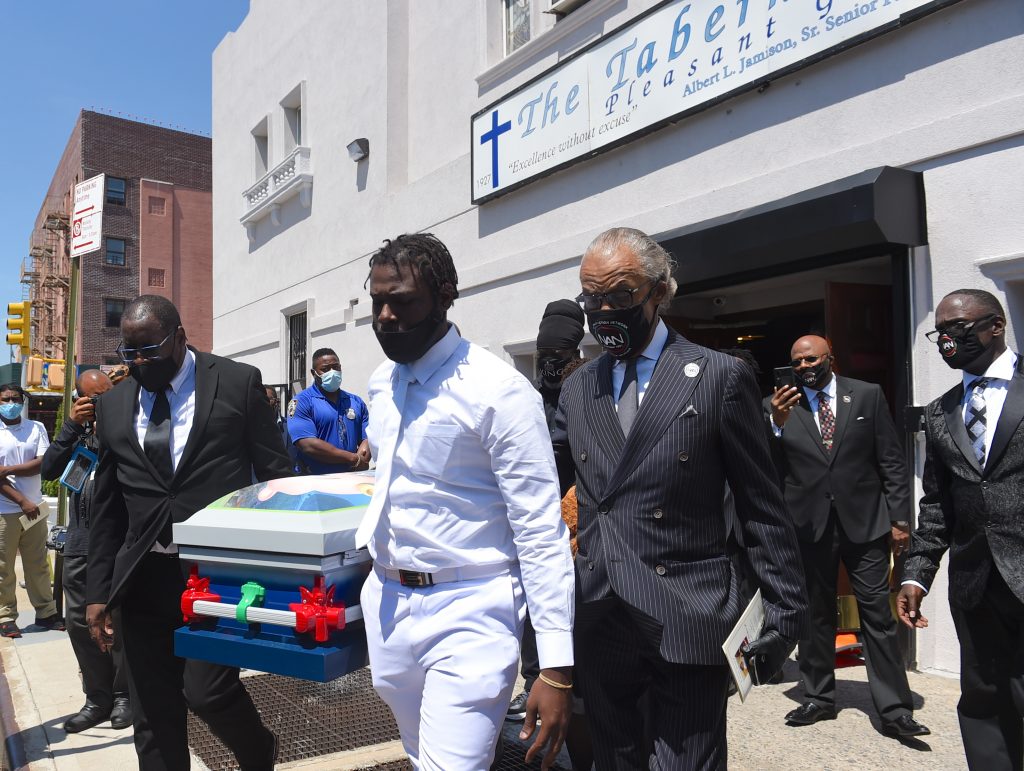 The family of Davell Gardner Jr. held a funeral for the 1-year-old who was shot to death in his stroller with four others at a barbecue in Bedford Stuyvesant on July 12. The boys father, Davell Gardner Sr. in white shirt, mourns his loss followed by Rev. Al Sharpton. (Photo by Todd Maisel)

Dozens of mourners gathered in Bedford-Stuyvesant on Monday morning for a funeral for Davell Gardner, Jr., a smiley, one-year-old boy who was tragically shot and killed in his stroller on July 12.

The service, held at Pleasant Grove Baptist Church on Fulton Street in Bedford-Stuyvesant, drew community members and local leaders who paid their respects to Gardner’s family and called for an end to gun violence.

“This young boy deserves the same kind of attention that hopefully could shake up this city,” said the Reverend Al Sharpton.

Family members remembered Gardner as a happy baby who lit up the lives of friends and family.

“He could change anybody’s day. He just had so many people that he loved and they loved him back,” said the boy’s father, Davell Gardner, Sr. “My son is gone. I don’t have anybody else.”

The boy’s father broke down while recalling his relationship with his only child.

“It was such a great experience … having a son,” he said through tears. “They took my son. They took my family.”

Gardner, who was going to turn two in September, was killed the night of July 12 after a shooter opened fire on Raymond Bush Playground in Bedford-Stuyvesant, where Gardner’s family was at a barbecue.

The baby and three other shooting victims were rushed to Maimonides Medical Center, where Gardner died of his injuries on early Monday morning. The other three victims survived.

Rev. Al Sharpton, who delivered the eulogy, blamed gun manufacturers, politicians, and special interest groups for the baby’s death, and urged the community must work together to get guns off the streets.

“This is disgrace that gun manufacturers, fun distributors, and those that are responsible will have to [answer],” he said. “These kids out here don’t have gun manufacturing plants, they don’t make bullets, [gun distributors] infiltrate our communities with guns, and we cant even get a background check passed.”

Following the speakers’ remarks, the family gathered around Gardner’s little casket, where his Elmo doll and Teddy bear sat surrounded by white flowers.

As the casket was placed in a hearse outside the church, attendees reassured the baby’s distraught family. One mourner was Gwen Carr — the mother of Eric Garner, who was killed in 2014 by a police officer’s chokehold — who said that her experience losing a child moved her to attend the baby’s funeral.

The funeral came one day after the family held a wake for Gardner at the Lawrence Woodward Funeral Home on Troy Avenue. Both the wake and the funeral were paid for and facilitated by New York Knicks player Taj Gibson and his foundation.

Gardner’s killing comes as gun violence continues to spike throughout Brooklyn, with 148 victims of gun violence over the 28-day period that ended on July 26 — compared with just 34 over the same stretch last year, according to police data. On Sunday alone, eight people were killed across the city in shootings, including a 16-year-old boy and an 18-year-old boy in Cypress Hills, who were found with gunshot wounds to the head on Vermont Street by Crosby Avenue at 6:38 pm, police said.

The reward for information on the murder of Gardner is now $21,000 which is a combination of city funds and the Sergeants Benevolent Association.