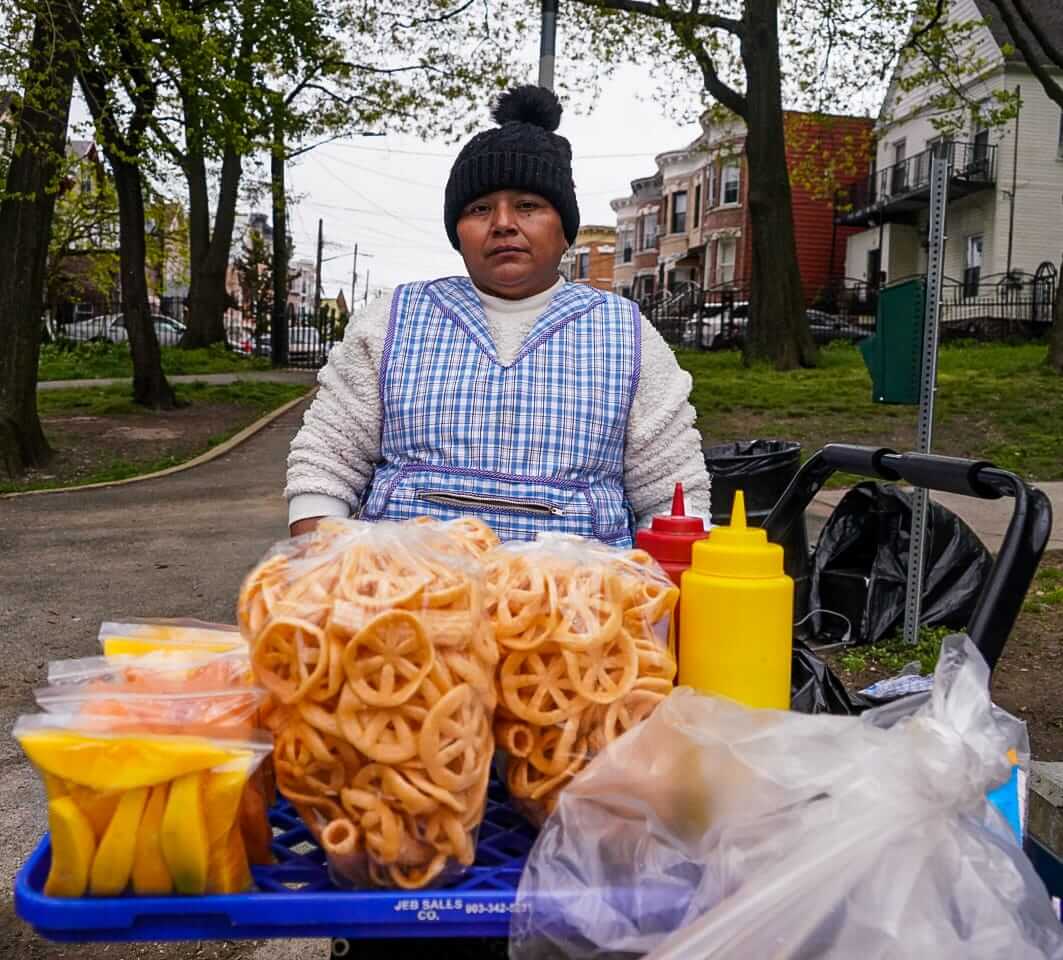 On a recent Friday evening, longtime subway fruit vendor Maria Falcon was sitting with her daughter and a fellow hawker on the outdoor platform of the Broadway Junction subway station in Brooklyn.

She was not selling mangos, melons, and other fruit out of the laundry cart in front of her at the time, the Queens resident said, when a pair of police officers walked up, put her in handcuffs and led her away.

“I felt terrorized,” Falcon told amNewYork Metro in Spanish through a translator.

Her daughter filmed the April 29 arrest, which the advocacy group Street Vendor Project posted on Twitter Saturday, May 7, and the footage quickly went viral online.

Horrific treatment of Maria, a mother, immigrant entrepreneur & her *daughter* who filmed

Earlier this week, Maria was arrested for selling mangoes & kiwis to customers she's served for 10+ yrs

Shame on our city for choosing cruelty, instead of supporting hardworking mothers pic.twitter.com/sjonO5FMjM

Cops kept Falcon in NYPD’s Transit District 33 station inside the transit complex for two hours and confiscated her cart and goods.

Officers told her to take off her sweater, pants, and shoes, and a female officer strip-searched her for drugs and weapons, before police gave her a citation for the violation of unauthorized commercial activity.

“I felt very scared and very fearful,” she said.

The case is a repeat of a prominent 2019 arrest of a churro vendor known as Elsa, whose detainment also blew up on social media spurring widespread condemnation almost three years ago. Elsa, who still works out of the station, was sitting next to Falcon on that recent Friday as well and she had to watch cops walk her colleague off just like they had done with her nearly three years ago.

‘Not in anybody’s way’

Falcon, who lives just across the Queens border in Woodhaven, originally hails from Ecuador and has been selling goods from street carts in the Big Apple since 2008. She has been arrested before, but this was the first time law enforcement took away her merchandise.

She usually sets up shop inside subway stations during the colder months, and in the spring and summer moves to parks, but she has stayed inside the transit system more often amid the COVID-19 pandemic due to higher foot traffic there.

“I set up in an area where I’m not in anybody’s way,” she said. “I’m up against the wall and I’m just there, not to do anything to anybody, just selling things like fruits and churros.”

A police spokesman said the NYPD, the Department of Consumer and Worker Protection (DCWP) — the primary agency in charge of enforcing street vending regulations — and the Parks Department have gone after the unlicensed operators in response to complaints by the local Metropolitan Transportation Authority station manager, and that officers had previously ticketed Falcon in early April.

“There have been multi-agency joint operations … in and around the Broadway Junction subway station prompted by numerous complaints from the MTA station manager,” said Sergeant Edward Riley in a statement. “This same vendor was issued a summons on April 5th and has refused to stop vending at the location after multiple warnings.”

An MTA rep could not confirm Sunday that a transit worker at that station had filed the complaints, but said that vending on platforms was especially a safety concern for the agency, which Falcon denied doing at the time.

“The MTA recognizes the benefits that vending can provide, but there are also safety-oriented rules about vending on platforms,” said Aaron Donovan in a statement. “While there are a wide range of opinions about which rules to prioritize, the MTA appreciates that the NYPD is working across the board to protect subway riders and encourage compliance with all Rules of Conduct in the system.”

Mayor Eric Adams has deployed more police officers underground than ever before in his first months in office, and hizzoner has pushed cops to crack down on low-level offenses and on people breaking MTA’s rules of conduct.

Meanwhile, thousands of street vendors have struggled to get an official permit as the city has effectively capped the number of licenses for decades, and advocates have called on state legislators to pass a 2019 bill to lift the limit.

Former Mayor Bill de Blasio largely moved enforcement of unlicensed street vendors from NYPD to the civilian DCWP, but ticketing numbers continued to go up in 2021, and police are still responsible for offenses within the transit system.

The DCWP has in recent months and weeks sent out inspectors flanked by NYPD officers to sweep areas with a lot of street vendors, according to Carina Kaufman-Gutierrez, deputy director at the Street Vendor Project.

The city agents tell the workers to pack up and leave or risk of having their goods trashed, according to Kaufman-Gutierrez. Such was the case with a fruit stand in the Bronx last September, where city shut it down and sanitation workers tossed out perfectly-good produce.

DCWP said at the time that throwing out the food was a mistake in its protocol. The agency and the Mayor’s Office did not provide comment for this story by press time.

Kaufman-Gutierrez claimed officials still rely on intimidating the small-time sellers — most of them immigrant women — and leave agents onsite to make sure they don’t come back.

“Imagine having two city agents and police officers coming to check on you,” she said. “The city is pouring all these resources into criminalizing and shutting down these small businesses instead of creating a licensing program and regulating them.”

Falcon was back to selling goods at nearby Highland Park Sunday afternoon, May 8.

She hoped the city will stop targeting the vendors and let them earn a living, while calling of government officials to make it easier for people like her to conduct business without harassment from the authorities.

“Just let us work with dignity. We are immigrants, we’re not hurting anybody,” she said.

“We women are not at home waiting for our husbands to come and earn for our families. We’re out working and trying to provide,” she added. “All I want is a place to work safely.”