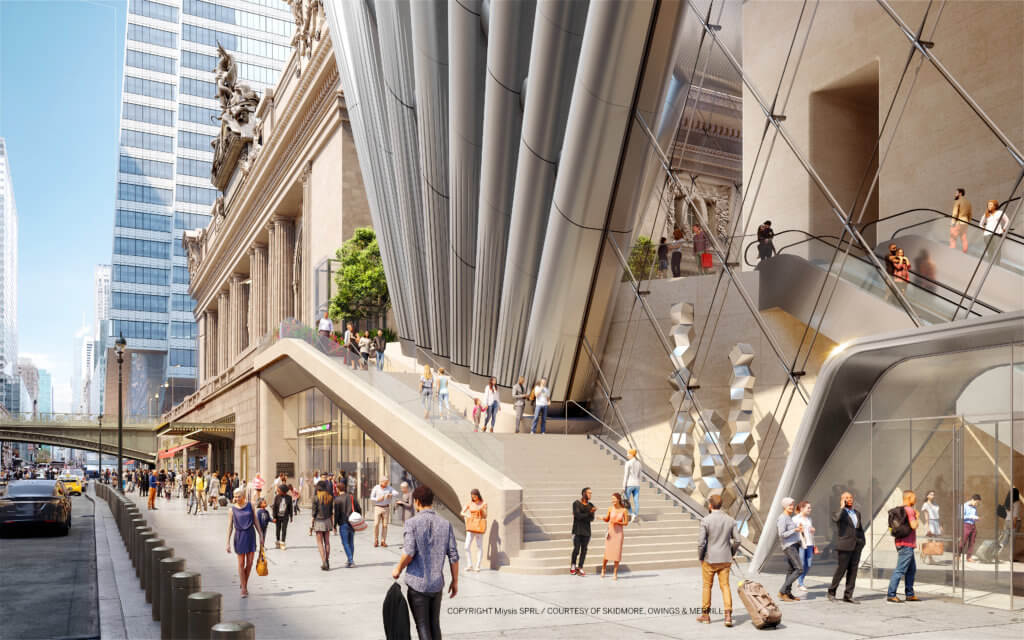 The glass and steel mixed-use tower will include office and retail spaces along with a 500-room hotel. The project will not only include new public space, but it will also add significant infrastructure upgrades to Grand Central Terminal and the Grand Central-42nd Street subway station. The ground level of the 2.2 million-square-foot tower will hold a new public train hall. The project’s team, in collaboration with the MTA, will ease congestion of the busy area by building new entrances and expanding circulation.

“A challenge is definitely presented by the buildings and by all of the transportation infrastructure,” said RXR Realty Senior Vice President Jeffrey Nelson. “It’s an exceptionally complex undertaking, but one that is a once in a lifetime opportunity: to fix a lot of the challenges with the subway and the connections to Grand Central.”

The enormous structure will feature a stone-clad core enclosed by high-performance glass and a lattice of elegant, structural columns. The building’s use of stone and visual symmetry will pay homage to the original style of Grand Central Terminal. The structure of the building will be pulled back from the edge of the train hall, leaving room for the 24,000-square-foot public open space designed to wrap around the building. The elevated outdoor area is intended to strengthen the neighborhood’s public realm as well as improve the pedestrian experience by bringing light and air to a congested part of the city.

175 Park Avenue will create nearly 10,000 direct permanent jobs as well as over 18,000 construction jobs. The permanent operation is estimated to generate an annual output of $7.9 billion in New York City’s economy.

“Now is the moment to be thinking about how these projects are so important for New York’s recovery. The investment, the jobs, and the delivery of new space that responds to the challenges that we’ve seen in this pandemic, will be critical for New York’s future as a whole,” said Nelson. “We’re optimistic for the future of the building as well as this city.”

The project is expected to enter public review this spring, aiming to finish the Uniform Land Use Review Process by the end of the year. Demolition is set to begin in 2022. The tower is expected to open in 2030.