By amNewYork
comments
Posted on October 14, 2020 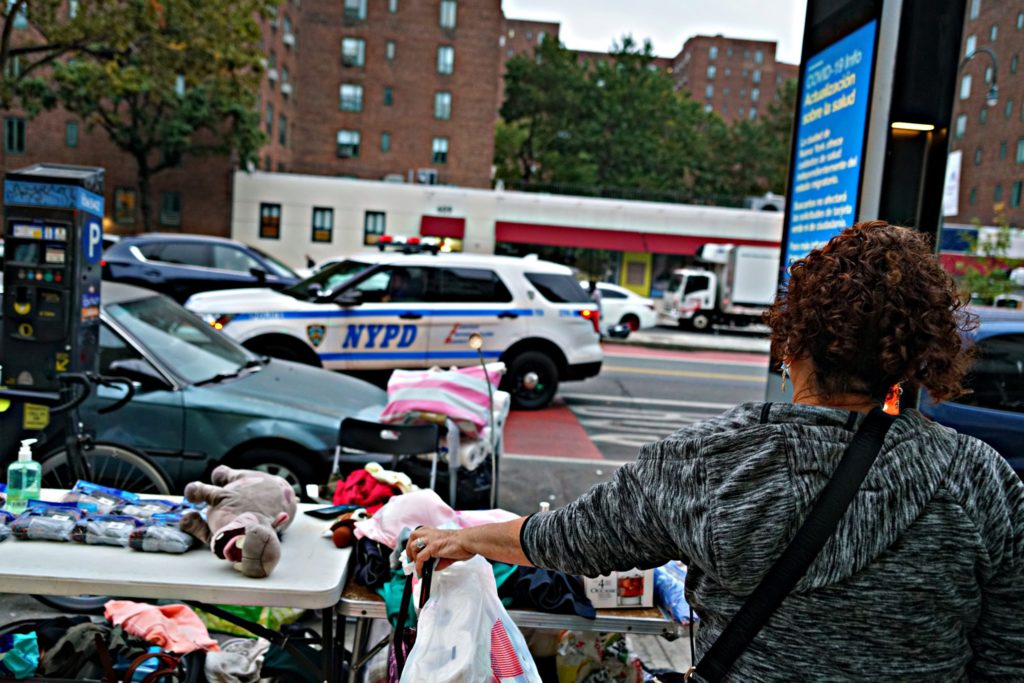 Shoppers at the junk market on 14th Street in the East Village. (Photo by Dean Moses)

Despite cutbacks to its homeless outreach program, the NYPD says it is working to stop problems associated with a large junk market that cropped up along 14th Street near First Avenue in the East Village.

As amNewYork Metro reported on Tuesday, the vagrant vendors have generated complaints from local businesses and residents of violent altercations, public indecency, drug use and piles of trash left mounted on the sidewalk. A host of storefront owners and employees have expressed fear for their safety and concerns of an influx of COVID-19 cases due to many of the mask-less merchants.

Since that report, the NYPD — which is often called to the strip on weekends when the majority of seller’s cluster in large groups — issued a statement about the reported inability to remove individuals and continued work to address the problem of the block-long flea market.

“Due to recent budget cuts to the NYPD, our Homeless Outreach Unit was disbanded. However, we continue to work with other city agencies and social service providers to address homelessness in our city,” said Sergeant Mary Frances O’Donnell, an NYPD spokesperson. “Year–to-date, we have conducted four joint operations with the Department of Homeless Services, the Department of Sanitation and the Department of Transportation to address conditions along the 14th Street corridor which resulted in multiple arrests in the area.”

“We continue to work closely with DHS to offer services to the homeless and address quality of life issues.  We are also coordinating with Clergy at Immaculate Concepcion Church to address the influx of homeless vendors during their weekly flea market,” said O’Donnell.

In addition to the frayed clothing, ruined footwear, and discarded home appliances being sold, some witnesses reported seeing individuals taking much needed food pantry items from Stuyvesant Town’s distribution and hauling it back where they then sell the produce to passersby.

However, according to a Beam Living spokesperson, the Stuyvesant Town pantry no longer distributes boxes of food at the 14th Street and First Avenue on site. Instead the complex has a signup list for residents who then receive the items via delivery to their apartments.

The spokesperson also stated they have never received any reports or heard about food pantry items being stolen or sold. When asked if Stuyvesant Town security officers have ever been called to deal with this issue, the spokesperson said that staff contains its activity to their property.

amNewYork Metro will continue to follow this story as it further develops.