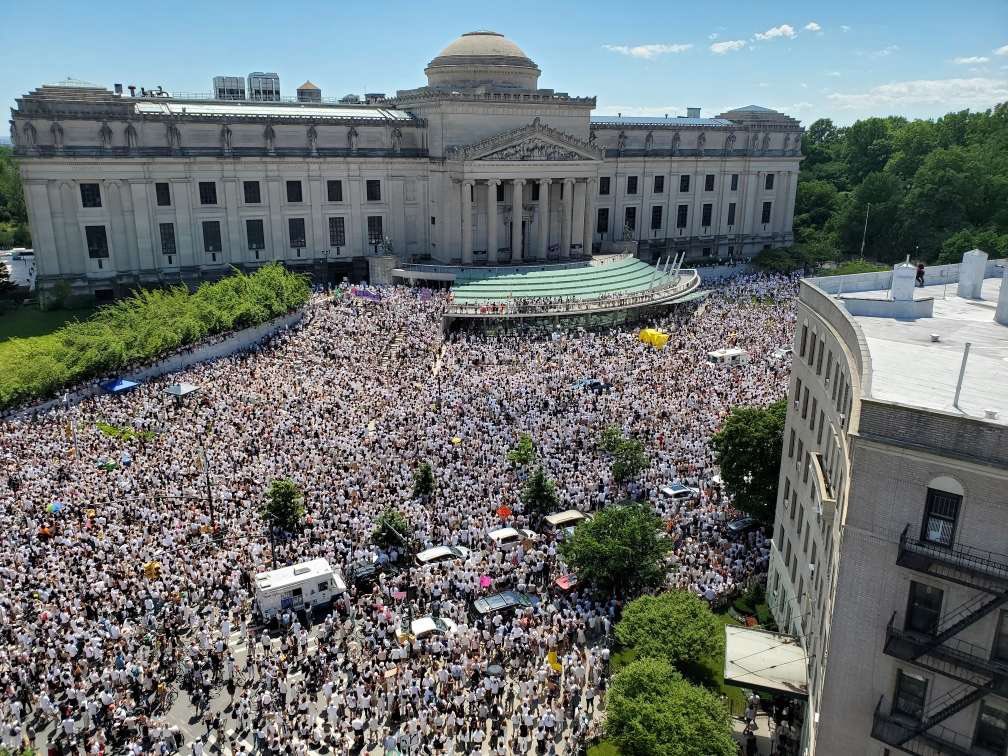 Thousands rallied outside the Brooklyn Museum on June 14, 2020 in the Brooklyn Liberation March. (Photo via Twitter/@M2theI)

BY MEAGHAN MCGOLDRICK AND TODD MAISEL

Thousands of people descended upon the streets of Brooklyn Sunday as part of “Brooklyn Liberation: An Action for Black Trans Lives.”

The rally and silent march comes days after two Black trans women — Dominique “Rem’mie” Fells and Riah Milton — were reported dead within 24 hours of each other. Attendees are calling for justice for Fells and Milton, as well as Tony McDade, who was fatally shot by a Tallahassee police officer in May; Layleen Polanco, a transgender woman who died while in solitary confinement on Rikers Island, and Nina Pop, a transgender woman who was stabbed to death in Missouri in May, among others.

The day of protest coincides with continuous Black Lives Matter demonstrations across the country in the wake of George Floyd’s killing, and also comes near the midway point of Pride Month.

The #BlackTransLivesMatter protest in Brooklyn right now is stunning. pic.twitter.com/glDticAc4o

A majority of the rally-goers wore white, as the event’s flyer called for, in solidarity with the movement. Thousands of the marchers went to the Barclays Center, only just to pass by and then proceeded down Flatbush Avenue, blocking the north-bound lanes.

The rally then jammed down DeKalb Avenue to Fort Greene Park, where thousands massed in the center of the park for a rally.

The rally is being held in partnership with the Okra Project, Marsha P. Johnson Institute, Glits, For The Gworls, and Black Trans Femmes in the Arts.

As of about 5 p.m., close to 3,000 protesters made their way from Brooklyn Museum to Fort Greene Park, where the demonstration is continuing.

Thousands more stayed on DeKalb Avenue that became a giant dance party of sorts, as park goers watched from the sidelines. NYPD stayed far away from the protestors the entire day, and there were no reports of arrests.