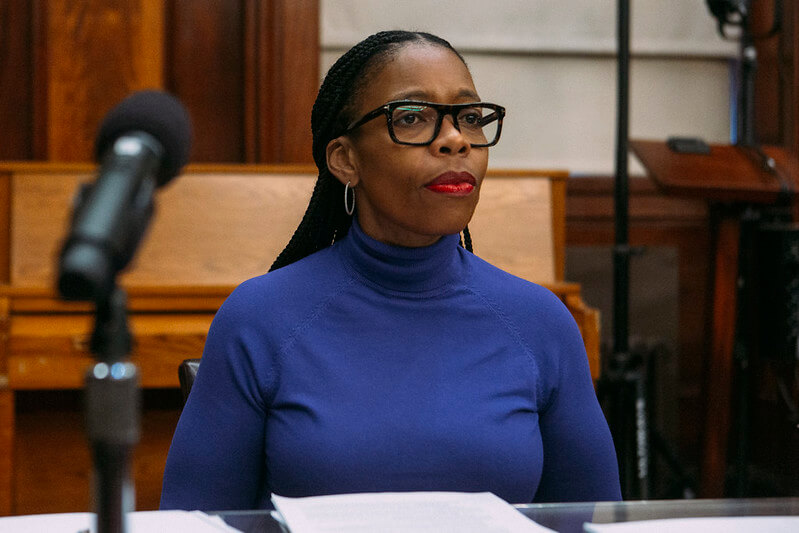 City Council Member Rita Joseph and a broad coalition of advocates are making a new concerted push for a bill that would ban the sale of menthol cigarettes in the Big Apple, with a pair of new digital ads highlighting the stories of those who’ve lost relatives to smoking-related diseases.

Joseph, a Democrat representing parts of central Brooklyn, first introduced the bill — Int. 0577 — last July and referred it to the council Committee on Health, but it hasn’t moved further along in the lawmaking process since then. The legislation would ban the sale of menthol, mint and wintergreen flavored cigarettes within the five boroughs, in a bid to lower the number of children who are enticed to smoke by flavored cigarettes.

The council member said she was drawn to this issue because it primarily impacts Black and brown communities, which are 11 times more likely to use menthol cigarettes than white smokers. Additionally, 89% of Black and 63% of Latino adult smokers use menthols compared to 32% of their white counterparts, according to the bill’s advocates, and 70% of young Black smokers prefer menthols.

But, Joseph said, the issue is also personal for her because of smokers in her own family and the way smoking was aggressively marketed to the Black community when she was growing up.

“I remember growing up, my dad was a smoker and we used to constantly tease him and said ‘he smoked like a dragon.’ It was the constant smoking, and leaving the smell,” Joseph said. “I remember ads going up, I know now [it’s] illegal to post ads anywhere near schools, but I remember they were catered to us. I remember picking up ‘Essence’ [or] ‘Ebony Magazine’, ‘Jet Magazine,’ when I was younger, and they made smoking look cool.”

“But a lot of my brothers and sisters, and people that look like me, are dying at an alarming rate because of menthol cigarettes,” she added. “So that’s why it spoke to me. That’s why I felt like I wanted to be on this bill.”

The “Menthol Kills NYC” coalition is championing the legislation and includes organizations like the New York NAACP, Campaign from Tobacco Free Kids and the American Heart Association. The group is holding a rally in support of the bill on the City Hall steps ahead of Thursday’s City Council Stated Meeting.

According to an analysis conducted by the city Department of Health (DOHMH), cited by coalition partners, if the city were to immediately ban menthols, roughly 90,000 New Yorkers would quit smoking over the next two years; and around 3,000 young people wouldn’t start smoking in the first place.

In an effort to drum up public support for the bill and bring more council sponsors on board, the group is releasing several digital ads featuring personal stories from New York NAACP President Dr. Hazel Dukes and Assembly Member Rodneyse Bichotte Hermelyn (D-Brooklyn), along with two other New Yorkers, about losing friends and family members to diseases linked with smoking.

“I’ve been fighting to protect Black New Yorkers for nearly 70 years,” Dukes said in one of the ads. “And that’s why I’m fighting now to end the sale of menthol products in our city. Menthols make it easy to get addicted to tobacco, leading to higher rates of death for Black smokers.”

In another ad, Bichotte Hermelyn — who also chairs the Brooklyn Democratic Party — said her father died from smoking cigarettes when she was 20 years old.

“I don’t know if my dad knew that menthol-flavored tobacco would kill him,” Bichotte Hermelyn said. “My father could have lived another 20 years. I wish he saw his grandkids, I wish he met his grandkids.”

“When you add that to something as toxic and addictive as tobacco, it causes the user to inhale more deeply, inhale more often,” Vitale said. “So, these products are extremely addictive, they’re easier to use. And as a result, much harder to quit.”

The bill is meant to plug a hole in a 2013 law passed by the council that banned the sale of flavored cigarettes in the city that didn’t ultimately bar the sale of menthols, according to Menthol Kills NYC coalition lead Candace Prince-Modeste. The council then moved to ban flavored vape pods and e-cigarettes in 2019, legislation that included menthol flavored vape pods and e-cigarettes, but still left out standard menthol cigarettes.

“In the efforts, and I guess the negotiations, unfortunately, surrounding that first bill, somehow or another menthol cigarettes were not included in that bill,” Prince-Modeste said. “So, the flavored tobacco bill passed, but it did not include menthol cigarettes. And so here we are today, 2022 going into 2023, trying to close that gap and ban the sale of menthol cigarettes in New York City.”

The bill has gotten pushback from large tobacco companies like Altria and some local trades groups.

Youssef Moubarez, a spokesperson for the Yemeni American Merchants Association — a group that represents thousands of Yemeni bodega and deli proprietors in the city, said that while his organization is against smoking, it doesn’t believe there should be a ban on menthols. He argued banning the legal sale of menthols would inevitably lead to the rise of an illicit market for the mint-flavored cigarettes, which would in turn lead to a higher police presence in Black and brown communities.

“It’s already been proven that once you ban something like menthol cigarettes or tobacco, it immediately creates an illicit market, where people are now getting it cheaper, and obviously buying more frequently, because they’re saving money on it,” Moubarez said. “Then you just create more problems in the communities where you were trying to save in the first place. You create more police activity.”

“The pushback that I got was that folks thought this was a way for police to criminalize people and this bill doesn’t do that,” Joseph said. “It has to do with consumer protection.”