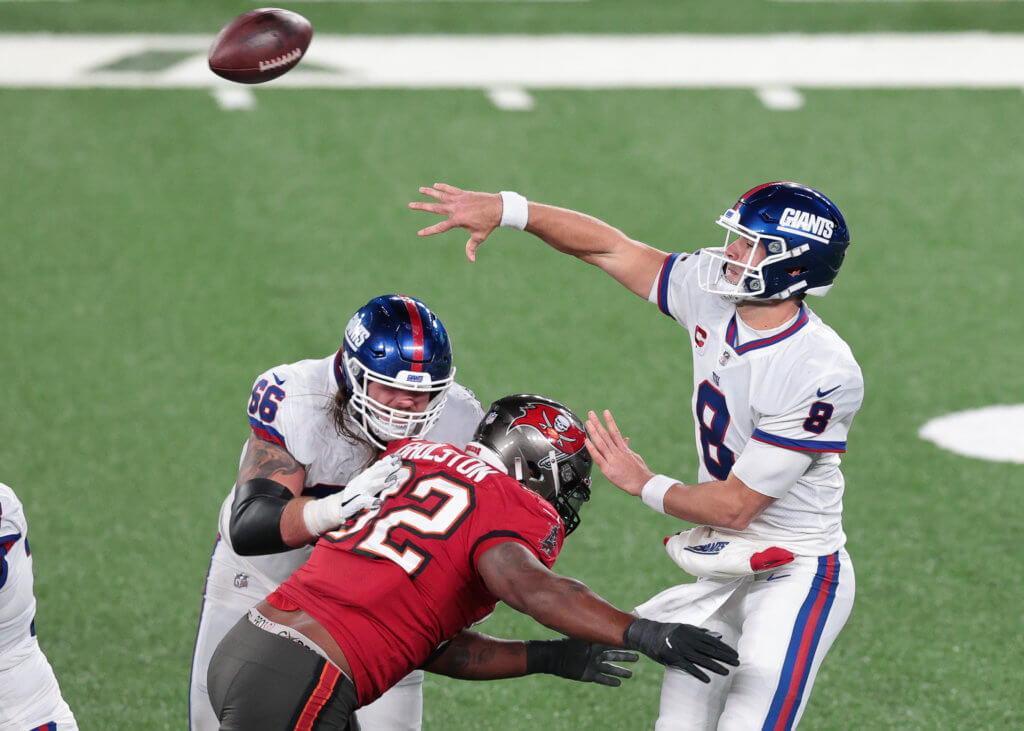 Another poor Daniel Jones performance has ramped up doubts on whether he's a long-term answer for the Giants.
Vincent Carchietta-USA TODAY Sports

Under most normal circumstances, the Giants would be able to practice some patience when it comes to the development of Daniel Jones.

These are not normal circumstances, though.

Monday night provided another frustrating chapter in the 23-year-old’s NFL development, throwing a pair of costly interceptions, missing on potential game-clinching throws, and hesitating on getting the ball out to Dion Lewis on the potential game-tying two-point conversion attempt in the 25-23 loss to the Tampa Bay Buccaneers.

“You know the young quarterback, he’s still trying to do too much,” Tampa Bay head coach Bruce Arians said. “It cost them basically the ball game throwing those two picks.”

Arians has plenty of experience working with young, turnover-prone quarterbacks after spending his first season with the Buccaneers with Jameis Winston, who posted 30 interceptions in 16 games last year.

Jones now has 13 interceptions in 2020, most in the NFL, and 35 turnovers in his first 20 career games. Only former San Diego Chargers quarterback Ryan Leaf had as dubious a start to his professional career.

His carelessness with the football has already prompted doubt on whether the No. 6 pick of the 2019 draft has the mettle to become the next Eli Manning — the man Jones was supposed to accept the torch from.

While Manning was afforded a bit of patience from the organization, there is the possibility that Jones won’t.

With the Duke product under center, the Giants are 1-7. That’s the second-worst record in the NFL in front of only the Jets.

Should their struggles continue — and it is expected even though they are far more competitive than their in-stadium rivals — a top-two pick is more than a reasonable expectation at the 2021 NFL Draft.

That means a golden opportunity will arise to nab a quarterback with a higher ceiling than the one Jones is currently exhibiting.

It’s more likely than not at this point that the Jets will go 0-16 this season, meaning the No. 1 pick and a shot at Clemson standout quarterback Trevor Lawrence will be theirs.

While they would have to make the difficult decision of moving on from Sam Darnold, many believe Lawrence is as close to a sure thing with the No. 1 pick as Andrew Luck was in 2012 with the Indianapolis Colts.

Should the Giants maintain their current spot at No. 2, Ohio State’s Justin Fields would be the next-best option and again, provide a higher ceiling and stronger skillset than what Jones offered when general manager Dave Gettleman reached for him at No. 6.

As a sophomore last season, Fields posted a 67.2% completion rating with 3,273 yards with 41 touchdowns and just three interceptions.

Considering the Giants have been competitive in a majority of their games, they could very well nab a few wins down the stretch and fall further down the draft board. If that’s the case, the Jones drama could subside.

However, even if they do have a path at Fields, Gettleman’s stubbornness could see the Giants pass on a top quarterback prospect to avoid the obvious admittance that yet another move made by the general manager has not worked out.