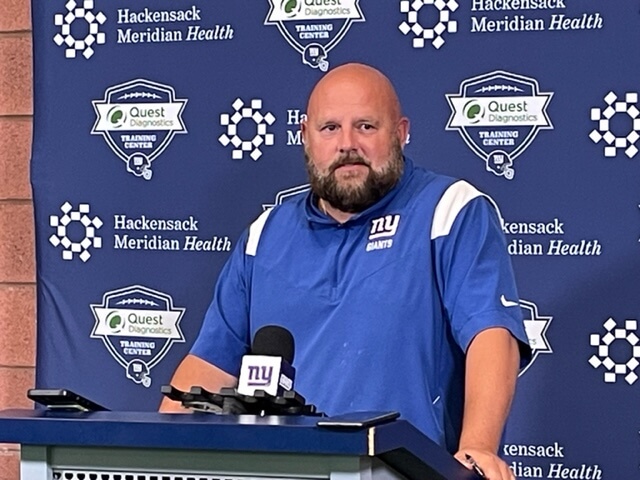 Offensive lineman Jack Anderson, defensive backs Justin Layne, Nick McLoud, and Jason Pinnock have all been claimed by the Giants.

Anderson was waived by the Philadelphia Eagles but had experience being in Buffalo last season. The former seventh-round selection rejoins with Daboll’s offensive scheme.

“Anderson played a little bit of both (Guard/Center) for us. Smart, he got claimed by Philadelphia. Didn’t want to lose him, but he had an opportunity to go and get claimed, and looking forward to working with him again. He can play inside either spot and he can play center too.” Daboll said.

Pinnock was one of seven players claimed off of the Jets roster, the most in football, and is expected to fill the backup safety void that is left with the injury to Rodarius Williams.

“He’s (Pinnock) good on teams. He had some good film out there. Played in a deep part of the field. Practiced against him, played against him. There are some redeeming qualities. Traits that when the guys watched him in the scouting department and our coaches thought it’d be a good claim.” Daboll said about the young corner.

Layne was also claimed off the Pittsburgh Steelers with experience at both safety and corner, while McLoud comes from the Bills.

Daboll later credited general manager Joe Schoen and the Giants’ scouting department for the work they had done to find guys like Pinnock and others around the league. Daboll was pretty pleased with the quality of players that were picked up.

“I just think he (Pinnock) has good traits that we’re looking for. Got some good speed, some size, playing the kicking game. We’ll get him here and see what he can do in our system.”

Lemieux’s injury and expected IR designation is a major blow to an offensive line that is already thin in the interior. The toe injury will expect to cost him at least half the season.

“He’s pretty resilient though. Unfortunately, he’s been through it once, but he’s been in good spirits. He’ll work back. … He’ll be back as soon as he can.” Brian Daboll said Wednesday.

The Giants now sit at a roster of 69 total players with the addition of 16 practice squad additions named on Wednesday.