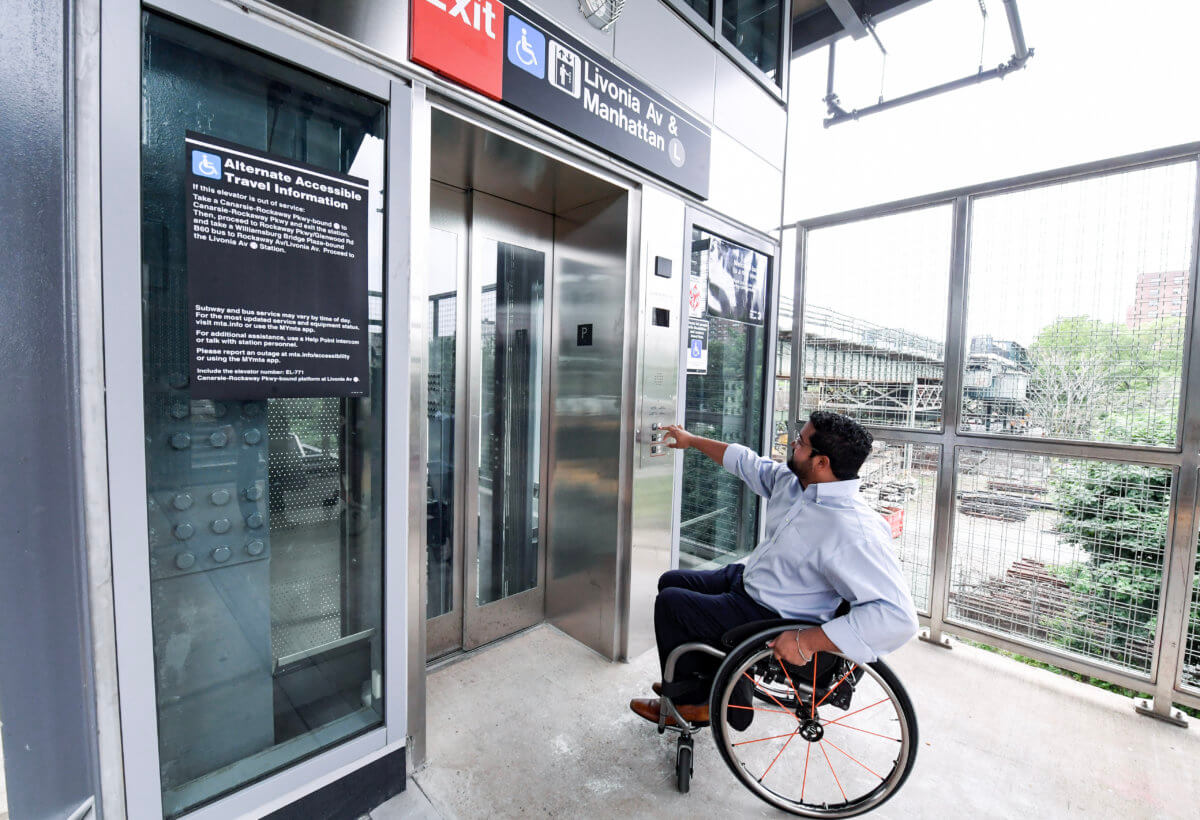 The MTA agreed to make most of its sprawling subway system accessible to New Yorkers with disabilities by 2055, settling a pair of state and federal lawsuits from 2017 by advocates and committing to spending billions of dollars over the coming decades on elevators, ramps, and other upgrades

The Metropolitan Transportation Authority aims to render 95% of its 493 subway and Staten Island Railway stations compliant with the Americans with Disabilities Act over the next 33 years by spending a set portion of its massive five-year capital project plans on accessibility, said the agency’s chief Janno Lieber Wednesday.

“Today is a truly historic day for the MTA, for New York, and I would say for civil rights in America,” Lieber said during a press conference at agency headquarters on June 22.

“For too long… it seemed as though there were two different subway maps, one for the general public and one for New Yorkers with disabilities, seniors, parents with strollers, and more, who were forced to contort their plans and divert throughout to get to stations that have elevators and other ADA accessibility elements,” Lieber said.

Of the subway’s 472 stations, 126 are currently fully accessible, or 27%, and Lieber said that the issue became personal for him when his late mother could no longer use her local stop.

“A few years ago she said to me, ‘I can’t get on the subway anymore,’ because her nearby station didn’t have elevators, ‘I don’t feel like in New Yorker,’” Lieber recalled. “That was a change in her life.”

In the current 2020-2024 capital plan, MTA allocated $5.2 billion for ADA projects at 70 stations, making up 14.69% of its budget for New York City Transit, which runs the subways, buses, and Staten Island Railway.

The agreement will require MTA to keep that rate of its Transit spending earmarked for ADA upgrades until it reaches 95% of stations with benchmarks every 10 years.

Advocates celebrated the commitment, but noted that there was a lot of work ahead to make nearly 350 stations accessible.

“This is a great day, but reality check. Reality is real and taking the New York subway today is still difficult and even dangerous for so many who need safe stair-free access,” said Sasha Blair-Goldensohn, a plaintiff in the case and a member of the Elevator Action Group at the advocacy organization Rise and Resist.

“Most stations are inaccessible, still, and many elevators break down daily, and that won’t change overnight. But it will over time because of this hard-won settlement that takes us from hope to guarantee,” Blair-Goldensohn added.

Lieber acknowledged that some subway stations in the remaining 5% are too challenging or costly to make fully accessible, but hoped that advancements in engineering may change that in the future.

“There’s a fair number that are judged by engineering professionals to be infeasible,” he told reporters. “What we’re trying to do is to leave open the possibility that you can come up with new engineering strategies — remember this is going to take some years.”

For example, the York Street station on the F line in DUMBO, Brooklyn, would cost anywhere between a quarter to nearly half a billion dollars to get a second entrance or elevator, amNewYork Metro previously reported.

Lieber couldn’t give a cost estimate for the three-decade commitment, but MTA officials told the local community board in a presentation about that station last week that they budget an average of $79 million on ADA projects.