FILE PHOTO: People gather at the entrance for the New York State Department of Labor offices, which closed to the public due to the coronavirus disease (COVID-19) outbreak in the Brooklyn borough of New York City, U.S., March 20, 2020. (REUTERS/Andrew Kelly/File Photo)

By Lucia Mutikani and Heather Timmons

According to a Reuters survey of economists, initial claims for state unemployment benefits probably climbed to a seasonally adjusted 3.5 million for the week ended March 28. Estimates in the survey were as high as 5.25 million.

That would be an increase of between 220,000 and 1.97 million from the prior week’s 3.28 million, reflecting both the newly unemployed as well as states catching up on previously filed applications that had not yet been captured in the system due to overwhelming demand. More states enforced “stay at home” policies last week.

A historic $2.2 trillion package, or Coronavirus Aid, Relief, and Economic Security (CARES) Act, signed by President Donald Trump last Friday is making it easier for workers to seek unemployment benefits. It raised payments for the unemployed by up to $600 per week per worker, and laid-off workers would get those payments for up to four months.

The Labor Department’s easing of filing restrictions is also believed to be contributing to the surge in claims. It has given states flexibility to amend their laws, allowing them to provide benefits to workers temporarily unemployed because of the coronavirus or who need to care for a sick family member.

“These changes will allow millions more to file, and the CARES Act removes still more restrictions,” said Chris Low, chief economist at FHN Financial in New York. “Anecdotally, we have reason to believe many companies waited for the CARES Act to pass before letting workers go.”

Some economists say the new bill would encourage unemployment filings. “Inevitably the stimulus has created some perverse incentives, potentially inflating the unemployment numbers,” said Michael Pearce, a senior economist at Capital Economics in New York. “The $600 a week additional federal unemployment insurance, equivalent to $15/hour for a 40-hour week, means there could be cases where workers will prefer to accept a temporary layoff.” 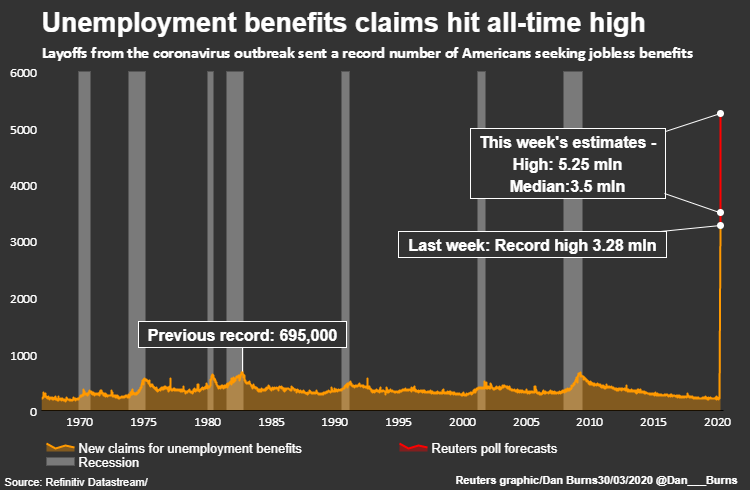 Some state officials say they’re struggling to process a flood of applications, and to adapt computer systems to accept new types of claims allowed under the CARES Act. That’s creating a backlog of claims that aren’t yet showing in the official figures.

“We will finish the week out through tonight, midnight, with 75,000 applications submitted,” Cher Haavind, spokeswoman for the Colorado Labor Department, said in a phone interview on Friday.

By comparison, Colorado reported less than 20,000 jobless claims to the Department of Labor last week. “Both the unofficial applications submitted and the official U.S. DOL claims will go up,” in coming weeks, Haavind predicted.

“Many states reported severe backlogs. Their systems were simply not designed to process the sheer volume of claims they faced,” said Tim Quinlan, a senior economist at Wells Fargo Securities in Charlotte, North Carolina.

U.S. unemployment benefits processing is built around a decades-old mainframe computer system, which each state has modified in different ways, making the changes described in the bill difficult to quickly adopt nationwide.

The unemployment office is one place that is hiring. Colorado has about 200 of its 500 labor department employees working on processing claims now, Haavind said, and is hiring another 90 temporary workers.