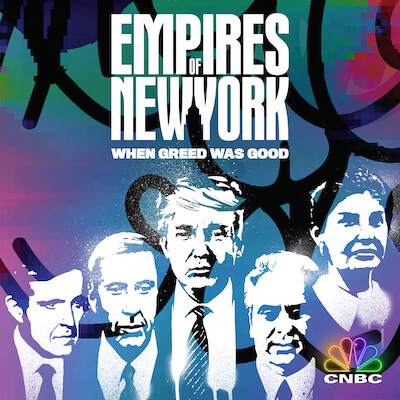 CNBC’s new documentary “Empires of New York” is a riveting examination of the constellation of greed, power image, myth, celebrity and fame that became the driving forces of 80s white-collar culture in New York City.

Premiering Sunday night, the six-part series takes a chronological look at the emergence of the “greed is good” ideology that irrevocably changed a city newly flooded with money. What holds these tales together are five key movers-and-shakers in industries from real estate to politics, who each played a part in shaping this infamous decade.

As director Matthew Galkin highlighted in an interview with amNewYork Metro, there is a sixth thematic thread to the series: the city’s “rebirth” from the impoverished, dilapidated, garbage laden, crime infested metropolis of the 70s.

These initiatives were led by the ambitious then-U.S. Attorney Rudy Giuliani, who made his career taking down mafia bosses such as John Gotti and eventually vaulted himself into Gracie Mansion as New York’s mayor.

This depth of consideration, rigorous research, skillful editing of pivotal TV moments, inclusion of real-time tabloid headlines and music to set that 80s vibe, when combined with the invaluable insights of first-hand testimonials, commentary from journalists, writers, intellectuals and artists—including Run DMC legend Darryl McDaniels and Sonic Youth’s Thurston Moore—who lived through this culture-shifting decade has succeeded in creating a documentary of rare depth and formidable significance.

Not only do we learn the details of the deeds and misdeeds of a morally questionable five, but of the ruthlessness of late-capitalism, the nature of the human spirit, morality, and the cultural shift from the traditional habits of the ultra-rich to the emergence of the nouveau rich, who wanted you to know, in precise term, the exorbitant level of their wealth and success—preferably on Page 6 .

Here are the essentials of some of the most infamous ’80s tyrants featured on “Empires of New York”:

Of the five figures featured in the “Empires of New York.” Leona Helmsley may be the least well known, and has never been a documentary subject before.

From humble Brooklyn-beginnings, Helmsley used her savvy to work her way up to vice president of a New York City real estate firm, becoming a millionaire in her own right.

Her wealth increased to an unimaginable level upon her marriage to billionaire Harry Helmsley in1972, whose real estate company owned The Empire State Building for a time.

But, it wasn’t long before the rumor mill started, with tabloid journalism—an essential medium for 80s scandal and gossip—awarding her the title “The Queen of Mean.” And for good reason.

According to staff accounts, if Leona found a spot of dust on a glass at her sprawling Connecticut mansion, or an unsuitably made bed at one of her hotels, she would publically berate or even fire employees on the spot.

Of such abusive incidents, Galkin said, “It’s like if you saw that scripted on television you would think ‘that’s a great line.’ But it’s true. You know, it’s a true line. So she really is just a character where fact is just greater than fiction.”

At a tax-evasion trial launched against Leona and Harry, a housekeeper gave testimony stating that she once heard Leona saying, “We don’t pay taxes. Only the little people pay taxes.”

When Leona died in 2007, she included a $12 million dollar trust for her beloved Maltese, Trouble. A Manhattan judge later knocked down the figure to a to a paltry $2 million on the grounds that she was mentally unfit when she made her will.

If there’s one individual who embodied the spirit of this new gilded age, it was the most infamous insider trader of the 20th century, Ivan Boesky, who defrauded investors to the tune of $12.6 million.

His mixture of ruthlessness and remarkable talent for economic criminal activity has led to speculation that Boesky was used as a prototype for Michael Douglas’ character’s, Gordon Gekko, in the 1987 movie “Wall Street.” The famous “greed is good,” line, delivered by Gekko in an exemplary, three-word distillation of ’80s ethics, is indeed uncannily similar to a speech that Boesky made at a University of California, Berkeley School of Business commencement ceremony.

The more illegal profiteering Boesky got away with, the cockier he grew. Galkin’s documentary includes an interview during which Boesky smugly states, “It’s a troubling matter to the interest of us in the industry and I think all such kinds of behavior should be eradicated.” As it turns out, there’s no stronger a poker face than a deeply unethical financier.

Much to Galkin’s disappointment, the shooting schedule for this document prevented coverage of both the 2016 and 2020 U.S. presidential elections. But a close analysis of documentary footage, 80s interviews and commentaries reveal shocking parallels between the man that Trump was, and the man he continues to be. We can translate a lot from our exiting commander in chief’s behavior when he was at the top of his 80s business game to his 4-year presidential reign.

Of Galkin’s first hand testimonials one of the most revealing, candid and moving is that of Tony Schwartz, “ghostwriter” of Trump’s breakthrough memoir and1987 bestseller, “Trump: The Art of the Deal.”

It is now widely believed that Schwartz was responsible for writing the bulk of—if not the entire text—over a period of 18 months. In the documentary, Schwartz seems genuinely surprised that Trump even bothered to read—or at least claimed, to have read—the book at all, “I seriously doubt that Trump has ever read a book straight through in his adult life.”

For decades, Schwartz has wrestled with “a deep remorse” for assisting in Donald Trump’s assent and donates most of the royalties he receives from its sales to a wide variety of charities. Schwartz writes, “Was the story I told completely and utterly false? Yes. And it was never anything close to the reality of who he was.” He has even stated that he would not mind if Random House took the book out of print or recategorized it as fiction.

Of Schwartz’s anguish, Galkin had the following to say: “I think he feels a level of responsibility for helping to create the Donald Trump myth. The idea that he is a masterful dealmaker, an astute businessman and an enviable tycoon.”

Add to this the fact that Trump has often claimed to be the principal writer of “The Art of the Deal,” and you have an exemplification of a dangerously deceptive man.

Schwartz recalls thinking, “If he could lie about that on Day One—when it was so easily refuted—he is likely to lie about anything.”

And there you have it! The first of Trump’s shameful public falsities, rooted in his 80s, credit-seeking ego. This lie, in tandem with a mid-80s comment broadcast on TV that, “We have a lot of dishonest reporters out there. And I’m not talking about them being slightly off, but totally dishonest, where they report things they know are wrong.” The statement was made amidst Trump’s first negative brush with the tabloids over his divorce from Ivanka Trump and failing casinos, Taken into consideration, this combination fully suggests that the inception of his now legendary Fake News Media propaganda was grounded in the 80s. As it turns out, tabloids, are a cruel mistress: The tide had turned against Trump and his winner/loser character philosopher found him wanting.

The partial details of Trump’s tax returns released by The New York Times in Sept. 2020 caused many a jaw to drop. But not 80s expert Galkin. “That story was not in any way shocking to me because we had studied the patterns of his behavior from the mid-seventies on, and it juts seemed like a continuum. It’s just another in the losses that he claimed on his tax returns. I mean he had tremendous losses in the 80s as well.

‘Empires of New York’ runs every Sunday at 8 p.m. on CNBC from Nov. 29 to Dec. 27. Narration provided by Paul Giamatti. For more information on the series, visit www.cnbc.com/empires-of-new-york