The intersection of Utica Avenue and Avenue N in Flatlands Brooklyn.
Google

A driver hit and killed a man at a notorious street in Flatlands, Brooklyn, Saturday evening, according to police.

The 31-year-old victim was trying to traverse Utica Avenue near Avenue N at 8:55 p.m. on Feb. 19 when the driver slammed into him in his Ford Explorer, according to NYPD.

Paramedics found the man with head injuries and brought him to Brookdale Hospital where he was pronounced dead.

Police said he was walking outside of the marked crosswalks when he was struck, but a department spokesman could not specify whether the pedestrian had the light or which direction the driver was heading on Utica Avenue.

The motorist stayed on the scene and has not been arrested, according to NYPD.

Police are withholding the victim’s identity until they can notify his family of his death.

The busy Utica Avenue corridor in that area has had dozens of serious crashes in the past decade, including 14 at the Avenue N intersection which injured 26 people since 2011.

Utica Avenue has long blocks with no marked pedestrian crossings for more than 800 feet in either direction and there have been numerous collisions mid-block between intersections. 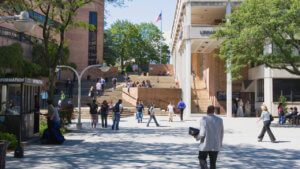