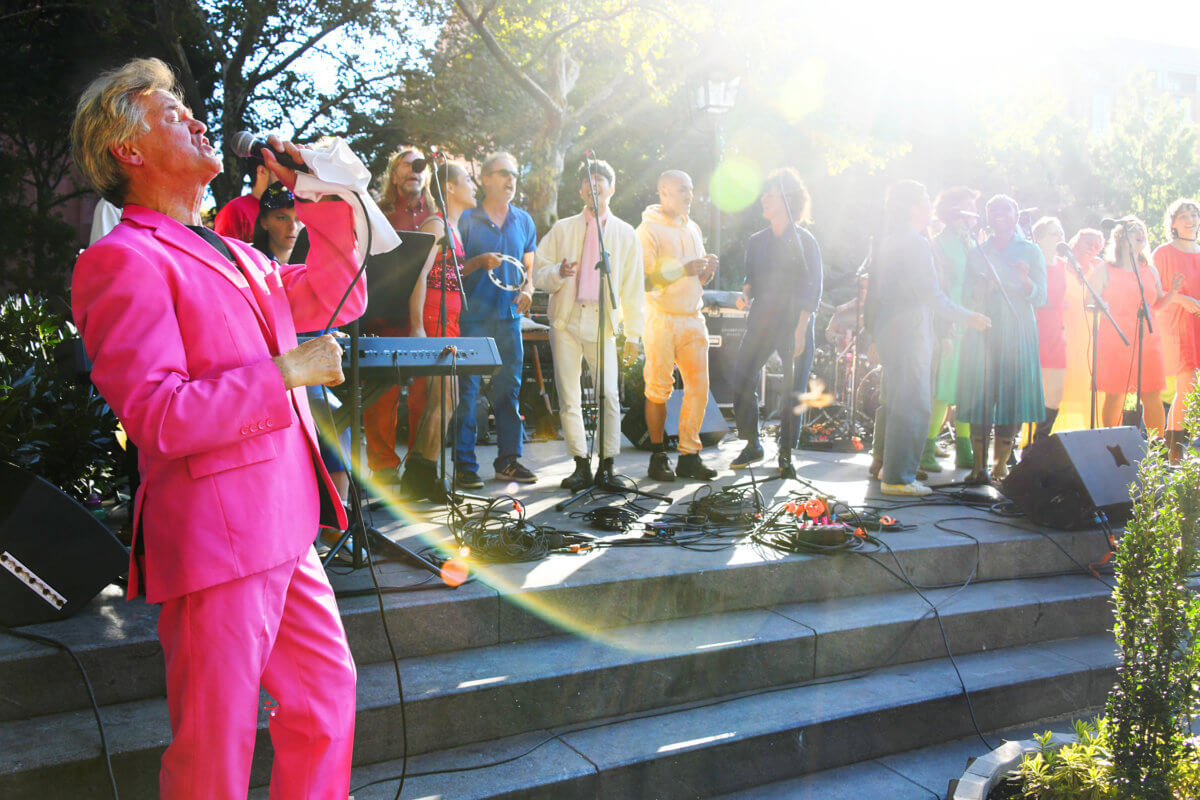 The Village Trip wrapped up its biggest festival yet with a free concert on Saturday in Washington Square Park that filled Garibaldi Plaza with fans of the Klezmatics, Joshua Nelson and Reverend Billy and the Stop Shopping Choir.

After two weeks of events that included club dates, artist talks, walking tours, jazz, folk, classical music and more, The Klezmatics wrapped up the fest by getting a sizable crowd dancing and singing along to their take on Klezmer music.

Klezmer can be partially described as Jewish Jazz, but that only sums up a bit of what they are about. Although their Eastern European melodies are the jumping off point, they blend the traditional sound with a modern approach and have no problem integrating the gospel sound of singer Joshua Nelson or the lyrics of Woody Guthrie, whose words were given new life on their album “Wonder Wheel.”

Vocalist/violinist Lisa Gutkin, who noted that Guthrie’s grandchildren were in the audience, enjoyed herself as much as anyone.

“I think I can speak for everyone when I say that yes! We had as much fun as it looked like we did,” she said. “It was fabulous to see so many of our long time fans, but I also loved watching people who were just wandering into the park join the dance line and go crazy. It was indeed thrilling.”

Greg Phischl — a longtime Klezmatics fan and Village resident — was delighted to see them, especially with Nelson.

“They are one of my favorite groups!” he exclaimed. “Frank London is the most amazing composer and arranger around.”

Reverend Billy, who sang and preached aided by his large and very colorful Stop Shopping Choir, had a message to impart that had nothing to do with enriching his church, but with some real concerns for humanity.

Billy’s community activism seeks to shed light on rampant consumerism, climate change and the power of banks and corporations, among other things.

All in all, it was an excellent finish to an ambitious two weeks. Liz Thomson and Cliff Pearson, the creators and artistic directors of the fest, were particularly pleased.

“The Reverend Billy and his Choir put their own unmistakable stamp on the proceedings,” Pearson noted. “As with last year’s show with Bobby Sanabria, they’re a hard act to beat – but we’re already thinking about The Village Trip 2023.”

“As always,” Thomson added, “our free concert in Washington Square Park provided a big and joyous finale to The Village Trip. It was truly uplifting to see everyone having such a good time dancing to the infectious sounds of The Klezmatics playing in their back yard! The mixture of klezmer and gospel from the band and the great Joshua Nelson was perfect for the time and the place.”

Nelson noted that “people now are looking for inclusive projects. It’s not just about being Jewish and Black, as I am — the right to exist is what it’s all about. Just be who you are and let other people be. There is so much more to the world than you can imagine.”

And how did he feel about the afternoon?