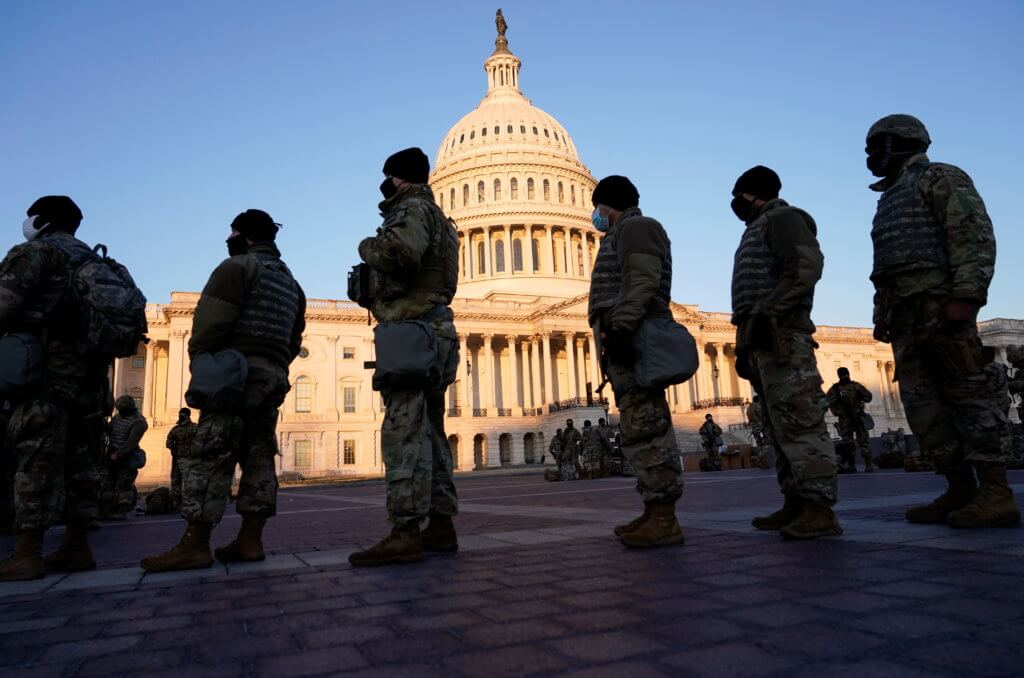 Members of the National Guard are given weapons before Democrats begin debating one article of impeachment against U.S. President Donald Trump at the U.S. Capitol, in Washington, U.S., January 13, 2021.
REUTERS/Joshua Roberts

As the U.S. House of Representatives moved on Wednesday toward a vote on impeaching President Donald Trump, Republican leaders in the Senate weighed whether to launch a trial on Friday on whether to remove him from office, a source familiar with the deliberations said, though no final decision was reached.

The internal Senate discussions were unfolding as the Democratic-controlled House sped toward impeaching the president for his role in last week’s siege of the U.S. Capitol, when Trump supporters breached the building’s security, sent lawmakers fleeing and left five dead in their wake, including a police officer.

The House was due to consider a single article of impeachment – a formal charge – of inciting an insurrection, who is due to leave office in one week. If the House approves it, Trump would become the first president impeached twice. National Guard troops and police provided security at the Capitol.

Under the U.S. Constitution, impeachment in the House would trigger a trial in the Senate on whether to oust the president. Republican Senate Majority Leader Mitch McConnell had previously suggested no trial could begin until the Senate was scheduled to be back in regular session on Jan. 19, only a day before Trump’s term ends and Democratic President-elect Joe Biden is due to be sworn in.

Democrats, including Senate Minority Leader Chuck Schumer, have pressured McConnell to agree to bring the Senate back under emergency circumstances to take up Trump’s impeachment before he leaves office.

At least five Republicans have said they would join Democrats in supporting impeachment, although just seven days remain for a Senate trial to expel Trump from office. If the Democratic-led House approves it, Trump would become the first president impeached twice.

“The president of the United States instigated an attempted coup in this country,” Democratic Representative Jim McGovern said on the House floor. “If this is not an impeachable offense, I don’t know what the hell is.”

Some Republicans made speeches urging the House not to impeach Trump in the interest in promoting national healing.

“Instead of moving forward as a unifying force, the majority in the House is choosing to divide us further,” Oklahoma Republican Tom Cole said on the House floor. “… Let us look forward, not backward. Let us come together, not apart. Let us celebrate the peaceful transition of power to a new president rather than impeaching an old president,” Cole added.

Cole was one of 139 House Republicans who voted against certifying the Nov. 3 presidential election results on Jan. 6, hours after the violence, after the Republican president repeated his false claims of widespread voting fraud.

House Majority Leader Steny Hoyer, the No. 2 Democrat, said Democrats intended to send the impeachment charge, once approved, to the Senate “as soon as possible,” and House Speaker Nancy Pelosi named nine impeachment managers who would present the House’s case during a Senate trial.

The extraordinary swiftness with which Democrats were moving reflects the ongoing danger that Trump poses to national security, according to top Democrats. It also increases pressure on McConnell to consider holding an immediate trial.

If Trump is impeached, a two-thirds majority of the Republican-led Senate is needed to convict him, meaning at least 17 Republicans in the 100-member chamber would have to find him guilty.

Hoyer told reporters he expected between 10 and 20 House Republicans to vote for impeachment on Wednesday.

Washington is on high alert ahead of Biden’s inauguration. Numerous National Guard troops were on hand and some service members wearing fatigues, with weapons at hand, could be seen sleeping inside the Capitol building on Wednesday ahead of the session.

The House convened just after 9 a.m. (1400 GMT) in the same chamber where lawmakers hid under chairs last Wednesday as rioters clashed with police in the halls of the Capitol, after an incendiary speech in which Trump urged supporters to march on the building.

House Republicans who opposed the impeachment drive argued Democrats were rushing to judgment for political reasons and argued for the creation of a commission to study the events surrounding the siege.

Republican Representative Jason Smith accused Democrats of acting recklessly and urged the House not to impeach Trump in order to help “heal the nation.”

Democrats moved forward on an impeachment vote after Vice President Mike Pence rejected an effort to persuade him to invoke the 25th Amendment of the U.S. Constitution to remove Trump.

Trump’s actions have weakened his iron grip on the party. At least five House Republicans, including Liz Cheney, a member of her party’s leadership team, said they would vote for his second impeachment – a prospect no president before Trump has faced.

In a break from standard procedure, Republican leaders in the House have refrained from urging their members to vote against impeaching Trump, saying it was a matter of individual conscience.

The New York Times reported that McConnell was said to be pleased about the impeachment push.

The House previously voted to impeach Trump in December 2019 on charges of abuse of power and obstruction of Congress stemming from his request that Ukraine investigate Biden and his son Hunter ahead of the election, as Democrats accused him of soliciting foreign interference to smear a domestic political rival. The Republican-led Senate in February 2020 voted to keep Trump in office.

Wednesday’s article of impeachment accused Trump of “incitement of insurrection,” saying he provoked violence against the U.S. government in a speech to thousands of supporters near the White House shortly before the Capitol siege. The article also cited Trump’s Jan. 2 phone call asking a Georgia official to “find” votes to overturn Biden’s victory in the state.

In his first public appearance since last Wednesday’s riot, Trump showed no contrition on Tuesday for his speech shortly before the siege.

“What I said was totally appropriate,” Trump told reporters.

Democrats could also use an impeachment trial to push through a vote blocking Trump from running for office again.

Only a simple Senate majority is needed to disqualify Trump from future office, but there is disagreement among legal experts as to whether an impeachment conviction is required first.