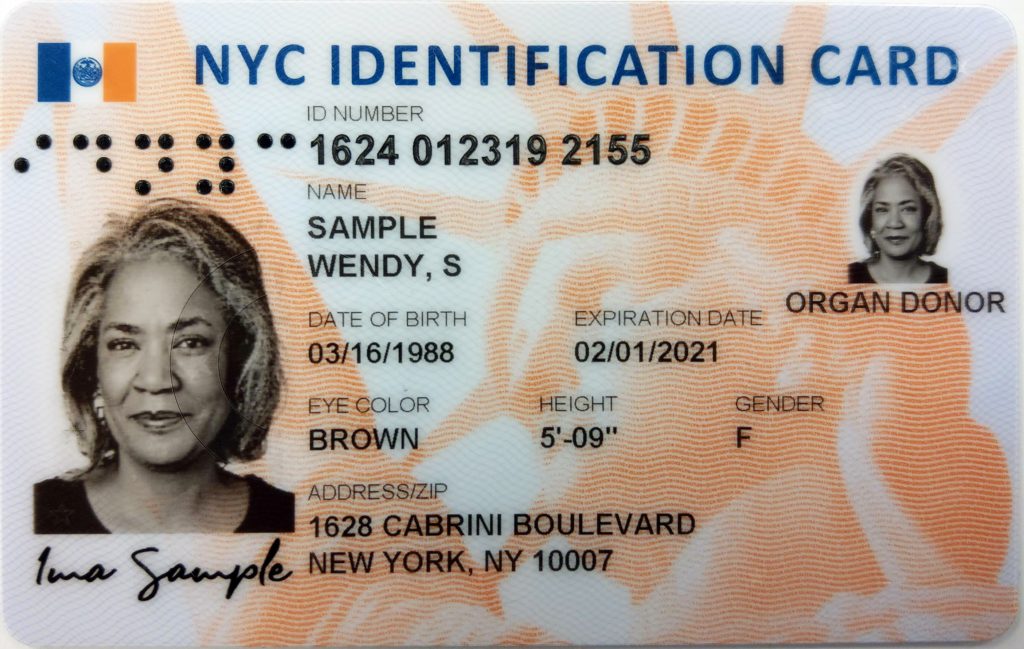 A sample of the updated IDNYC card with braille embossing. (Photo courtesy of the Mayor’s office)

Five years since its inception, the IDNYC card is becoming more accessible and coming with new benefits.

To celebrate the fifth anniversary of the IDNYC program, the de Blasio administration is unveiling a much-needed upgrade to the IDNYC card, as well as  slew of new perks that cardholders can receive.

To further expand accessibility, all new and newly renewed IDNYC cards will be embossed with braille to help blind and low-vision individuals use the card, making it the first locally-used ID card in the country to include braille. Those who don’t want to wait for renewal to update their IDNYC card, they can visit an enrollment center to have their cards embossed.

“While the Trump administration targets our neighbors at every turn, we will continue to make New York City a place for all,” said Mayor Bill de Blasio. “IDNYC makes our city more accessible for everyone, no matter immigration status, gender identity, and now no matter whether you are blind or low vision.”

IDNYC is the largest and most successful municipal ID program in the country with over 1.3 million cardholders, and is available to all New York City residents aged 10 years or older, regardless of their background. Other recent card additions include allowing the cardholder to self-designate their gender, including the third designation, denoted as “X” should they not want to declare a gender, as well as their preferred language and emergency contact.

“In order to provide an ID for all New Yorkers, it needs to be accessible for everyone,” said Victor Calise, Commissioner of the Mayor’s Office for People with Disabilities. “As we celebrate the five year anniversary of IDNYC we are proud of the addition of braille for the 200,000 New Yorkers who are blind or have low vision. This is one step of many as we continue to work with the Mayor’s Office of Immigrant Affairs and DSS to provide people with disabilities equal access to everything NYC has to offer.”

“I am proud to step into 2020 with this historic announcement. The addition of braille embossing is a critical expansion of the card’s accessibility for blind and low vision New Yorkers, and further ensures that IDNYC serves every New York City resident, regardless of their individual circumstance,” said Bitta Mostofi, Commissioner of the Mayor’s Office of Immigrant Affairs. “We are also thrilled to kick off a new decade with a national retail partnership, our first regional partner, and iconic New York City institutions to bring even more exciting benefits to cardholders!”

In addition to the card upgrades, being an IDNYC cardholder has a ton of new added perks. IDNYC has recently partnered with Costco to offer IDNYC cardholders who signs up for a new membership with Costco by purchasing a Membership Activation Certificate a set of exclusive Costco coupons valued at over $60 plus additional free items.

IDNYC cardholders will now reap the benefits of the program’s newest cultural partners in New York City. The Juilliard School, Atlantic Theater Company, Signature Theatre, and South Street Seaport Museum are all offering free one-year memberships to their respective institutions for IDNYC cardholders. Additionally, every Wednesday cardholders can show their IDNYC at Queens Botanical Garden for free all day admission. The full list of 2020 IDNYC benefit partners can be viewed here.

Outside of New York City, the IDNYC program partnered with the Sullivan Catskills Visitors Association, located in the Catskill Mountains. Through this partnership, IDNYC cardholders can receive discounts at select businesses in Sullivan County including Kartrite Resort & Indoor Waterpark and The Sullivan Catskills Event Center.

“Culture is written into our city’s DNA so it’s fitting that, from the very start, expanding cultural access has been so fundamental to IDNYC – which over one million card-carrying New Yorkers now possess,” said Acting Commissioner of Cultural Affairs Kathleen Hughes. “We’re thrilled that so many of our city’s remarkable cultural institutions are rejoining us for the fifth anniversary of this extraordinary program, and that new groups continue to step up and offer residents ways to meaningfully engage with culture across the five boroughs.”

With the first set of cards set to expire in a few months, the program launched its #RenewYourIDNYC in October 2019. New York City residents whose IDNYC is expiring in less than 60 days, or whose card has been expired for less than 6 months, are able to apply to renew their IDNYC through an online portal or in person at an Enrollment Center.

For more information on benefits, eligibility criteria, and how to renew or enroll visit nyc.gov/idnyc or call 311 and say “IDNYC.” Deaf New Yorkers can also learn more about IDNYC in ASL by contacting the DSS ASL Direct Video Phone at 347-474-4231.