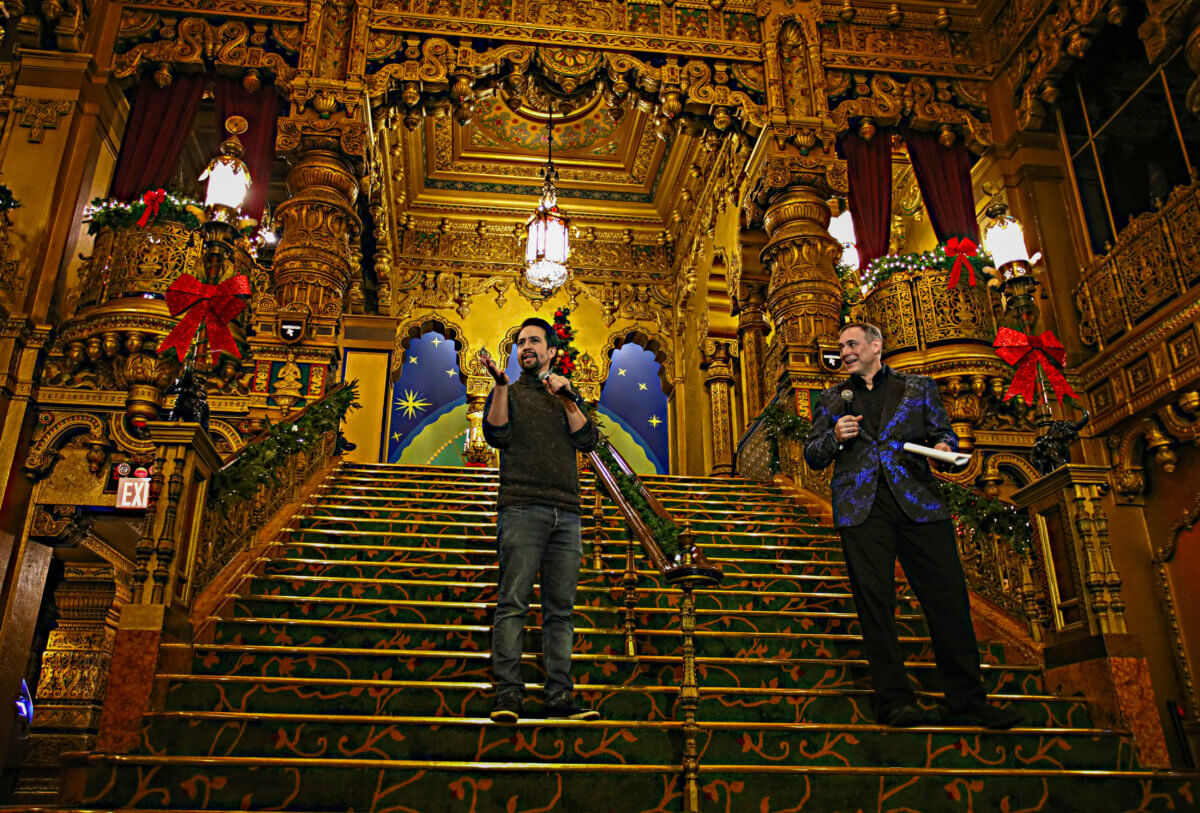 On Dec. 7, a small number of guests filed into the United Palace located at 4140 Broadway where they oohed and awed at the historic venue’s architecture. Taking glasses of champagne and selfies of the lavish theater, the group exchanged excited murmurs as they awaited a mysterious announcement.

Dating back to the 1930s, United Palace was famed for showcasing films complete with live music and entertainment but fell on hard times in recent years before closing its doors completely due to the COVID-19 pandemic.

Descending the grand hallway’s extravagant staircase, executive producer at the United Palace Mike Fitelson and Lin-Manuel Miranda announced that the golden palace will once again exhibit the magic of movies, complete with entertainment akin to the days of yore.

“I fell in love with it as soon as I came in here, and pre-Hamilton, Mike and I really worked to make this a place to see movies again,” Miranda said, explaining that in 2014 he joined in with the community to purchase a projector in order to be able to screen films within its walls once more. With the help of the Miranda Family Foundation, 2022 will see the return of public screenings at the United Palace.

“I’m really proud to announce that we are restarting the United Palace film series, they’re going to be free screenings for the community once a month and we get to watch movies together again,” Miranda said to a round of applause.

The first screening is scheduled for Jan. 30 with the United Palace’s website, currently hosting a voting option where the public can help choose the six movies set to be screened from January to June.

Not only that, but Miranda also promised to bring along notable figures to discuss the films, reintroducing the vaudevillian flair made famous in theaters of old. The venue itself has also undergone an extensive renovation that, while making modern improvements, also looked to keep the early 20th century aesthetics intact. A part of those enhancements includes a brand-new screen and incredible surround sound.

“Watching movies in the dark in this beautiful space that is what we’ve been missing here for the past two years,” Mike Fitelson said.

The theatre is owned by the nondenominational United Palace of Spiritual Arts (who purchased it in 1969) and was once the premier vaudeville location designed by architect Thomas Lamb—who was notably known for creating the designs for the Cort Theater (formerly known as Ziegfeld Theatre). The United Palace continues to serve the community through partnerships with local programs, such as the Northern Manhattan Arts Alliance.