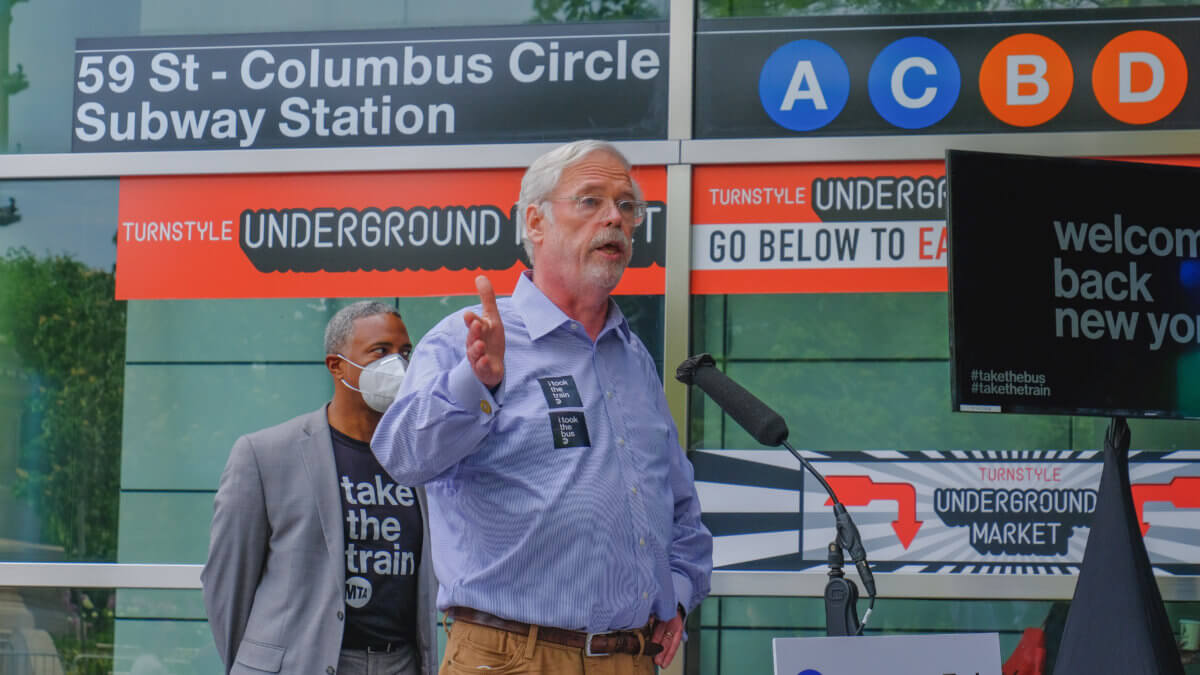 MTA officials are telling New Yorkers it’s safe to ride the subways – in terms of COVID-19, anyway – with 24-hour service scheduled to resume Monday morning after a year-long hiatus.

MTA Chairman Pat Foye said Sunday that the authority is still pressuring the city to provide up to 800 more cops to patrol the underground after a series of attacks on Friday, and others in recent months involving MTA employees.

“We are asking you to continue to ask for additional police resources, and mental health resources to be invested in the system,” Foye said during a Sunday press conference at Columbus Circle. “We’re grateful for the actions taken by Commissioner Shea in terms of surging, police officers, the auxiliary officers and dedicating 80 new graduates from the NYPD Academy to the system from an MTA point of view, we’re doing our part we’ve got 100 MTA police officers in the system every day. That’s despite the fact that the NYPD has primary responsibility for policing the subway system.”

Foye says the subways are safe for the now 2.2 million daily riders, but not safe enough based on recent incidents the MTA as well as Transport Workers Union Local 100 has been drawing attention to in recent weeks.

Most recently, four teens were arrested for a series of slashings that took place at stations on the 4 train in Manhattan on Friday. Earlier in May, subway conductor Gerard Sykes was slashed on the J train, and prior to that, in February, four homeless people were stabbed in a string of attacks that killed two.

Another homeless man was also found dead in an Elmhurst subway station, apparently stabbed to death by a man who has since been apprehended by NYPD.

Foye assures riders that the trains are safe, but greater NYPD visibility to do the trick to continue the upward trajectory of ridership which still has not fully regained momentum since it was cut down by over 90% at the outset of the pandemic.

According to Executive Vice President of Subways Demetrius Crichlow, cleaning activities and efforts to remove homeless people from stations and trains will continue without the shutdown and disinfecting crews who would normally be in depots would join other cleaning crews at terminus stations.

“So what we’ve done overnight is we’ve had a huge, huge impact, and working with our city partners from the officers, as well as some security offer our internal security folks, as well as homeless outreach. So during that overnight period we encouraging folks to get off of the trains and leave the station, which is something that we hadn’t done before,” Crichlow said. “So we utilize that time and a distance between the trains to be able to really hit the trains and the stations for cleaning overnight that two to four period was a good opportunity for us to test to use as a testbed.”

As such, discourse between the MTA and Mayor Bill de Blasio’s administration has been contentious surrounding the call for additional enforcement of crime in the system.

On Friday, the agency went so far as to list a number of candidates for mayor who they believe will fulfill this request which included Eric Adams, Shaun Donovan, Kathryn Garcia, Ray McGuire and Andrew Yang. That was included at the end of a statement from acting NYC Transit President Sarah Feinberg on the slashing incidents earlier that day.

Some did not welcome any suggestion that the MTA would endorse any political candidate.

“It is out of line for the leader of a public agency to try to place undue influence on an ongoing mayoral race by spotlighting candidates that share her personal, pro-policing position,” Renae Reynolds, Executive Director of Tri-State Transportation Campaign, said. “It is alarming that the leader of New York City Transit is willing to go this far to lobby on this particular issue while taking a more cautious, hands-off approach when it comes to fighting for funding from Albany to maintain quality service and a state of good repair.”

But the MTA indicated Sunday that there was no explicit endorsement of any candidate in its statement, adding that Reynolds’ claims were wholly inaccurate.