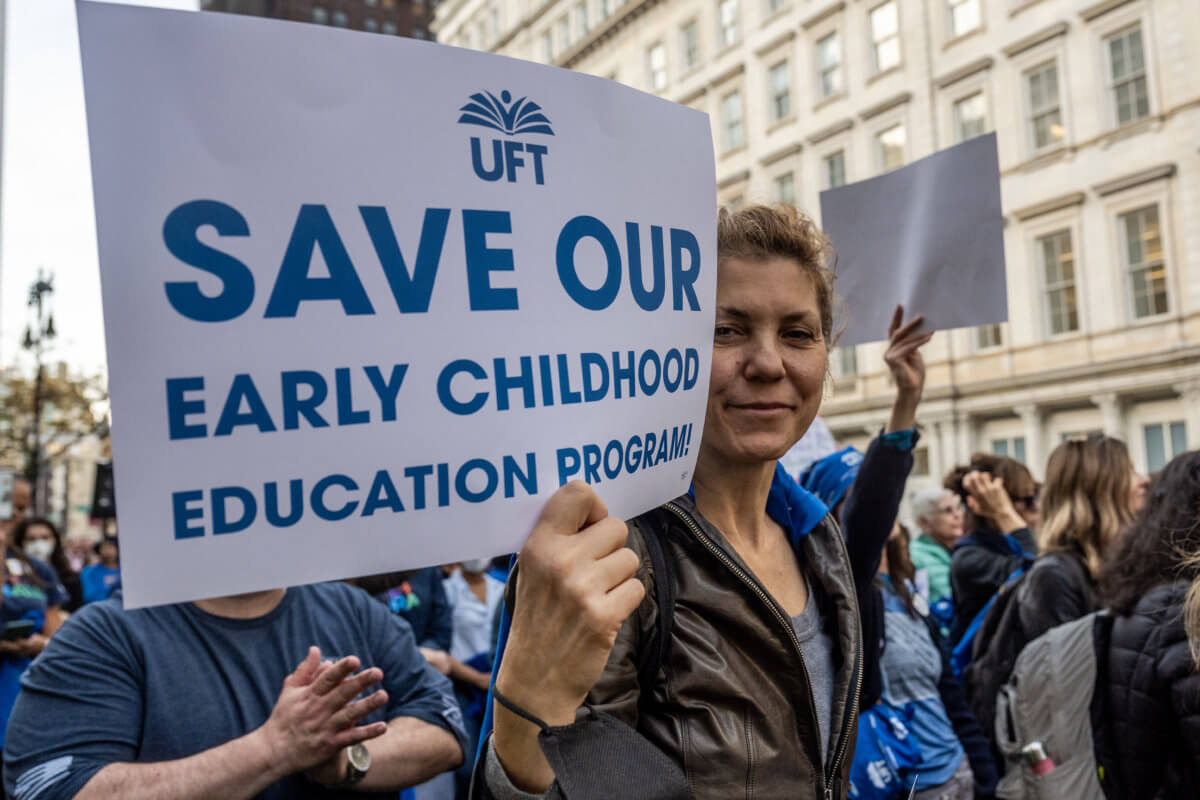 Social workers, parents, and educators rally to save NYC’s early childhood programs outside Tweed Courthouse in Manhattan on Nov. 4, 2022.
Photo by Gabriele Holtermann

Several hundred social workers, educators, and parents joined the United Federation of Teachers (UFT) for a rally and press conference Friday outside Tweed Courthouse demanding that the Department of Education save early childhood programs and reinstate nearly 400 instructional coordinators (ICs) and social workers who were “excessed” in September.

The UFT is concerned about what they view as the dismantling of early childhood education, one of former Mayor Bill de Blasio’s signature policy achievements, and is also calling for a vote of no confidence in the Deputy Chancellor of Early Childhood Education, Dr. Kara Ahmed.

Early childhood workers say Ahmed, who oversees child care and Pre-K for All programs at the Department of Education, misled the city council when she testified under oath at a City Council committee meeting in October, claiming that all instructional coordinators were still in their roles. However, early childhood social workers and instructional coordinators received excess notices two days before the new school year, on Sept. 6, informing them they were let go from their current positions but could apply for other jobs in the DOE.

Marge Raphaelson, a pre-K social worker in District 15 in Brooklyn, explained that the support system for the pre-K program was pulled when Schools Chancellor David Banks and Deputy Chancellor Ahmed excessed 200 social workers and 200 ICs.

“However, we’re still working, we’re still expected to work, and our status is uncertain,” Raphaelson said while attending the rally outside Tweed Courthouse, the Department of Education’s headquarters in Lower Manhattan. “So we’re working under this cloud of uncertainty.”

Raphaelson said that the impact of their work reaches far beyond the age of four.

“If we lay the proper, impactful foundation by the social work and the instructional work that we do, it will serve them going forward into all the grades,” Raphaelson said. “I believe it’s like a pebble in a pond. We drop the good stuff when they’re three and four years old, they’ll never forget it, and they’ll never unlearn it.”

According to information the UFT shared at the rally, anonymous sources had told the union that Dr. Ahmed told district early childhood leaders that the instructional coordinators “would be gone by mid-year.” And earlier this week, the UFT alleges, a deputy superintendent told teachers that ICs and social workers would not return to the classroom.

Raul Garcia, the UFT Social Workers & Psychologists Chapter Leader, said that the Pre-K for All program had been one of the best programs in his career because students were getting the support they needed.

“Since the new leadership came in, especially on Sept. 6, the new deputy chancellor made decisions, and it seems like she really doesn’t understand the program,” Garcia said.

Garcia also pointed out that the children entering pre-K are “pandemic babies.”

“All these kids really need more social and emotional support now more than ever,” Garcia said.

Rally attendees refuted previous remarks made by DOE and Department of Early Childhood Education (DECE) officials that most of the time, they work out of an office instead of directly working with students and teachers.

In a press conference on Nov. 3, DOE Chancellor David Banks remarked that “he did not understand why social workers would have a problem being closer to children.”

ICs typically spend 95% of their time supporting students and teachers in the classroom, according to the UFT. They observe teachers and help them with age-appropriate lesson plans and activities.

With the influx of over 5,000 migrant children, the union noted, ICs with the dual-language program could prove instrumental in the success of ‘Project Open Arms,’ an educational support plan for families seeking asylum.

DECE social workers, meanwhile, work directly with families and children from birth to age 5. According to the UFT, they work closely with teachers, paraprofessionals,  and students with behavioral challenges, support families in finding special needs services, and also work directly with principals.

Martina Meijer, a fourth-grade teacher in District 22 in Brooklyn, attended the rally because of the value ICs and social workers provide for teachers.

“The stronger that we have our early childhood program, the stronger our upper grades and middle schools and high schools and colleges will be,” Meijer said. “You know, it’s all connected. So we need to start our youngest learners off right.”

Tammie Miller, chairwoman of UFT’s daycare providers, compared the UFT’s relationship with the DOE as a “dysfunctional marriage” and said the current situation of displacing workers and shutting down programs was nothing new.

“It’s an old shell game. When the new administration comes in and blames the old administration,” Miller said. “Sadly enough, dedicated workers are always impacted by these random, uncoordinated, poorly planned decisions. Today we came out to say, ‘We want justice for these workers who have been treated unfairly.”

UFT assistant secretary Michael Sill said the DOE and DECE “had no plan.”

“If you think there need to be sweeping changes on anything, it should be because you’ve done a deep assessment of what’s currently the case, and you have a good plan about what needs to happen,” Sill said. “They’ve shown us they have no plan, but they have also done no assessment of what they have.”

amNewYork Metro reached out to the Mayor’s office for comment regarding the rally, and is awaiting a response.