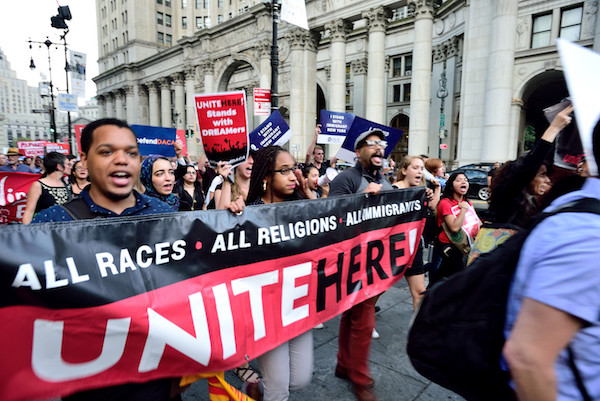 While our government battles over immigration reform, secure in their status as documented individuals, we know firsthand what it is like to live in constant fear of deportation. Despite significant cultural and economic contributions, undocumented immigrants in this country face unprecedented difficulty that demands action.

We are both “Dreamers” – the moniker used to describe immigrants who came to this country with their families at a young age. It is beyond troubling, even insulting, to see our life experiences trivialized and used as political pawns by those who lack an understanding of what it’s like to live in the shadows. We are examples of how the system is flawed, offering only band-aid solutions to complex problems and attempting to arbitrarily rewrite our life experiences.

Nine years ago, Congress reached an impasse that resulted in an Executive Order establishing the Deferred Action for Childhood Arrivals (DACA) program to extend deportation protections for certain young immigrants so they could earn an education, work, and remain in the U.S. safely, expanding their hope for a brighter future.

Even though certain temporary status programs, including DACA, opened opportunities for nearly 700,000 young undocumented immigrants, they were not meant to be a long-term fix.  The result left millions behind due to arbitrary eligibility standards. These individuals are effectively trapped, unable to access a permanent immigration status, and stuck in a legal limbo that destabilizes immigrant communities across New York and our nation.

We share an unbreakable bond born out of our struggles and determination to follow our dreams. Monica came to this country at 16, just three months too late to benefit from DACA’s protections. While she remains undocumented, she has not been deterred in her fight for the just and dignified treatment of young people, women, and immigrants. Catalina is one of “the lucky ones” who obtained legal status through marriage, but has never forgotten the difficulties she faced in accessing critical services and a college degree.

Through hard work, a network of support, and some luck, we both succeeded despite the system’s failures. We have been able to advocate for and implement change, doubling down on our efforts to ensure that all undocumented immigrants for generations to come can obtain legal status, instead of being trapped in an endless cycle of false hope. We’ve worked to pass the Jose Peralta DREAM Act, offering financial aid to New York students like us, fought to ensure undocumented New Yorkers can access driver’s licenses, and so much more.

Considering the contributions of undocumented immigrants, we firmly believe that it is past time for Congress to put politics aside and act. People in power have been debating our future while we watch, wait, and worry. We have suffered long enough. Decades of inaction have resulted in a patchwork of policies that only worsen an already bad situation. And a ready solution is at our fingertips. The American Dream and Promise Act passed the House with Republican support. A similar bipartisan bill in the Senate, the Dream Act, would create a pathway to citizenship for young undocumented immigrants – a policy supported by 77% of Americans. The passage of this legislation would ensure thousands of families won’t fear deportation and will finally be treated with the respect they deserve. We urge Congress to forward this legislation to the President’s desk, as it is not only the right thing to do, but it will also be a much-needed stimulus to the U.S. economy.

Immigrants from all types of economic and cultural backgrounds – including both of us – are deeply woven into the fabric of our state and country. We call on U.S. Senate Majority Leader Chuck Schumer to use any means necessary to ensure individuals and families can finally access the permanent legal status they deserve.

Assemblymember Catalina Cruz was elected in 2018 to represent NY’s 39th Assembly District. A lawyer, she is the first DREAMer elected to the NYS Legislature. Monica Sibri is a student at the Graduate School of Political Management at The George Washington University, a co-founder of the CUNY Dreamers, and the Development Advisor at Poder Latinx.