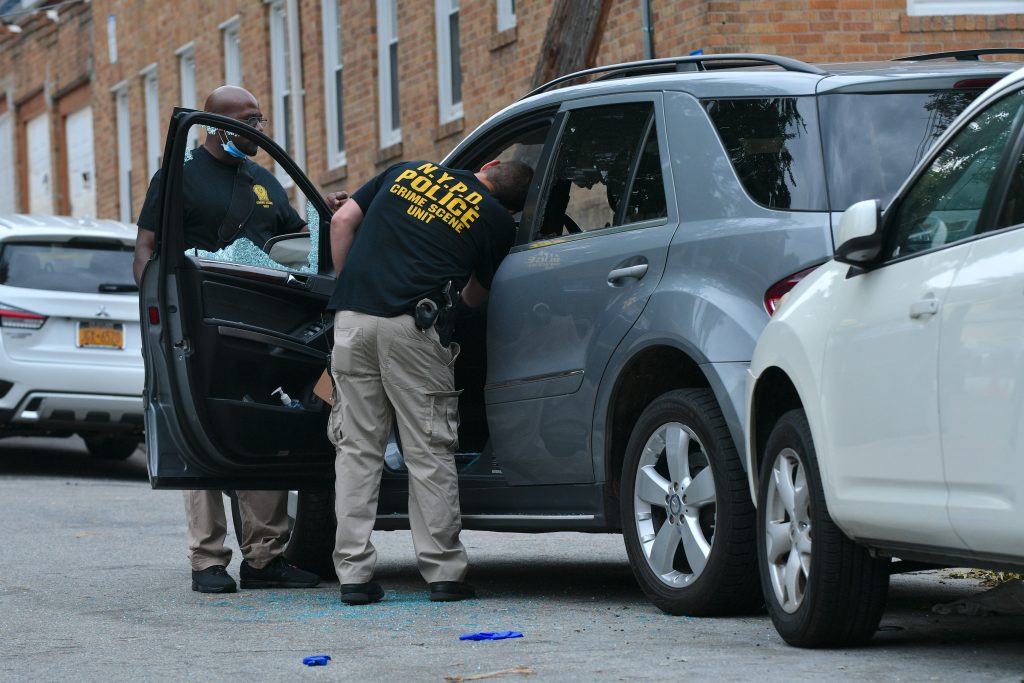 A man was killed, another wounded in Queens early this morning. (Photo by Lloyd Mitchell)

One man is dead and six others were wounded in several Brooklyn and Queens shootings overnight after a momentary lull in the gun violence due to the tropical storm rolling through the city.

At least six people were stabbed in separate incidents in Brooklyn, Harlem and the South Bronx as violence again spikes.

The violence comes as the NYPD steps up patrols in high violence areas including Brooklyn, Harlem and the South Bronx. Queens has been more subdued until early this morning when three people were shot, resulting in one death and three wounded in South Ozone Park.

Efforts to quell the violence have been somewhat successful in some communities as local anti-violence groups visit high crime areas in an attempt to convince combatants to lay down their arms.

Commissioner Dermot Shea continues to maintain that the city is “in the middle of a perfect storm,” with the courts trying to catch up with arrests, grand juries finally starting to work after COVID-19 closures. He has also blamed the release of inmates from Rikers Island and the release of those being arrested for lesser crimes under bail reform.

Mayor Bill de Blasio says other issues include lack of jobs, closing of schools, pent up anger over Covid-19 and sheltering at home – forcing the cancellation of events and closing of entertainment venues.

Both blame the proliferation of guns from southern states for much of the firearm violence in the city and other big cities around the country.

Aug. 5, 3:17 p.m. – A 42-year-old woman was shot twice in the chest at 3246 Bayview Avenue in the Gravesend Houses, a NYCHA development in Coney Island. Police from PSA1 and the 60th Precinct found the woman wounded at the location and she was rushed by EMS to Coney Island Hospital where she was expected to survive.

No motive or description of the suspect has been provided as yet.

The woman was taken to Elmhurst Hospital and the man to Wyckoff Hospital, where both were expected to recover.

Police say four male Hispanics, one on a motorized scooter, approached the victims and began firing at the victims. Three of them fled on foot and the other on the bike.

There is no motive or further description of this shooting at this time.

Aug. 5, 9:32 p.m.  – A 29-year-old man was shot in the back in a dispute in front of 459 Howard Avenue in Brownsville, Brooklyn. Police from PSA 2 and the 73rd Precinct found the man wounded at the scene and EMS rushed him to Brookdale Hospital, where he is expected to survive.

No description has yet been given on a suspect in this case.

Aug. 5, 11:27 p.m. – A 20-year-old man was shot once in the face in front of 360 Dumont Avenue in the Tilden Houses, a NYCHA development in Brownsville Brooklyn. Police from the 73rd Precinct were able to speak to the victim who told them a male black, 22-25 wearing a white t-shirt and blue jeans shot him at close range and ran.

He was taken to Brookdale Hospital where he is expected to survive.

Aug, 6, 4:24 a.m. – Two people were shot in front of 85-02 91st Street in South Ozone Park, Queens, resulting in the death of one of the victims. Police from the 102nd Precinct found the three who were shot, with numerous spent rounds scattered on the pavement.

Police say a 19-year-old was struck in the left arm, a 21-year-old hit in the chest and the head. The younger man was rushed by EMS to Jamaica Hospital where he was listed in serious condition. The 21-year-old was taken to Elmhurst Hospital, but could not be saved.

Neither victim was identified at this time and no description of the suspects has been provided.

‘I did hear noise, the window of the light, woke me up.  It makes you think where do you go?  I felt safe until now,” said Sabrina N, a five year resident of the community.

“I’m not sure if it is a drug shooting or drive by. It is a good block, surprised this happened, “ said resident Almo Effle.

In addition to these shootings, there were reports of shots fired in Brooklyn, Manhattan and Far Rockaway, Queens. In one of these shootings in Brownsville, Brooklyn, a suspect was nabbed with a firearm. Information on this case is pending.

Anyone with information in regard to these acts of violence is asked to call the NYPD’s Crime Stoppers Hotline at 1-800-577-TIPS (8477) or for Spanish, 1-888-57-PISTA (74782). The public can also submit their tips by logging onto the CrimeStoppers website at WWW.NYPDCRIMESTOPPERS.COM, on Twitter @NYPDTips. All calls are strictly confidential.